Even going virtual, the RVA Environmental Film Festival holds its biggest event yet with 12 days of showings. 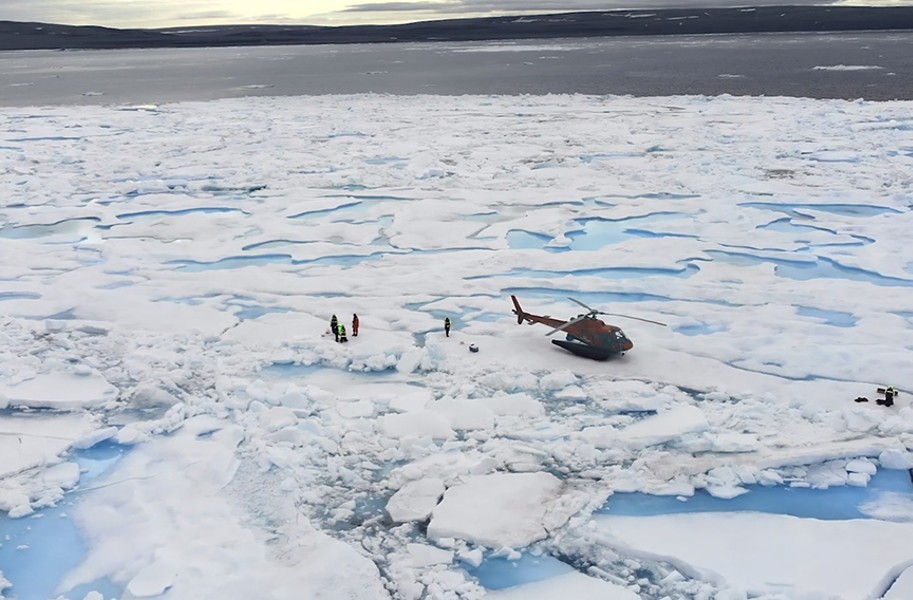 For centuries, sailors lived and died trying to find a path across the mostly frozen Arctic. Today, scientists are on a mission to understand a melting Arctic and how its repercussions will affect humankind.

With support from the National Science Foundation, the innovative Northwest Passage Project – a team of scientists, educators, a journalist, an Arctic scholar and 28 graduate and undergraduate science students – is the subject of a new documentary, “Frozen Obsession.” Screening opening night of the 2021 Richmond Environmental Film Festival, the world premiere of the feature length version of the film has a local angle because the project included several Virginia Commonwealth University students. They, along with Linda Fernandez, their professor, Donglai Gong of the Virginia Institute of Marine Science and David Clark, the film’s director and producer, will be part of the panel discussion afterwards.

Even before the pandemic limited most options, the RVA Environmental Film Festival had been looking to expand its audience by adding a virtual festival to supplement the in-person event. The biggest difference this year is the decision to leverage resources and skills by working with like-minded organizations around Richmond. This approach, which it dubbed the Festival of Many, was inspired by the Acts of Faith Festival, in which Second Presbyterian Church works with local theater groups to present faith-based plays.

“This way, the festival retains its local character, while making it truly unique,” says festival chairman Gill Sigmon. “The first three days of the festival will be presented by the RVA Environmental Film Festival committees, meaning we selected the films, while the remaining nine days will be presented by our partners, meaning they selected the films and will host the events.”

All together, the collaboration represents Richmond’s biggest environmental film festival yet. As in past years, the events are completely free, discussions and panels will follow the films and audience members will be able to ask questions via chat boxes.

A long-standing component of the festival is the Virginia Environmental Film contest that highlights environmental issues or topics relevant to Virginia. The submissions are produced by Virginia resident filmmakers, often new to the craft, on environmental topics regarding Virginia.

“It’s always very exciting to see our region filmed from an environmental perspective,” Sigmon says. The grand prize winner, “The Goose Creek Watershed,” is a short documentary on the history, culture and threats to the Goose Creek watershed, an integral part of the Potomac and Chesapeake Bay watersheds. Another notable local award winner, “Hidden Dangers: the Z Dam,” about the James River, is by Stephen C. Wolf, as presented by his 6-year-old son, Colton.

The organizers see the festival as an important part of Richmond’s environmental movement, helping to inform people concerned about making a better future. This year’s festival includes several environmental justice films, reflective of the many social justice issues facing the country, including “The Importance of Access: Equity in our Green Spaces” hosted by the James River Association, “Urban Roots,” hosted by First Unitarian Universalists Church’s Earth Ministry, and “Revisioning Recovery: Films Uncovering the Roots of Disaster,” hosted by the sustainability department. “Our mission enables us to attract volunteers and organizations who see the festival as a great way for them to make an impact,” Sigmon says.

Because the rate at which our climate is changing can seem slow to some, developing a consensus that it is an existential threat has been difficult. Not so for the volunteers involved in the festival. Sigmon recalls how in the 1960s, the Chesapeake Bay was full of sea grasses that provided habitat for wildlife, while also acknowledging that even that abundance was only a small fraction of what the earliest settlers found. “Three Early Environmental Documentaries,” to be hosted by the James River Film Society, will specifically make that point. “So what I in my childhood saw as abundance, the early settlers would see as a destroyed ecosystem.”