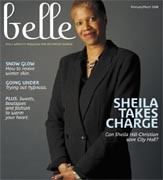 With the easy smile and quick joke of a gracious hostess, Richmond's new chief administrative officer, Sheila Hill-Christian, is easy to fall for. She exudes confidence and grace, but also the sort of no-nonsense business-mindedness that lets you know she's this city's best shot.

Hill-Christian takes charge at a pivotal moment in Richmond's history -- three years into a grand experiment of a "strong mayor" form of government led by her new boss, Mayor L. Douglas Wilder. Many people see her task as steering this ship off the rocks.

We met with Hill-Christian in her second-floor corner office in City Hall, where she was sitting in a burgundy leather wing-back chair. She was dressed both stylishly and practically for her new job as the lady with the whistle brought in to clean up a game that's turned decidedly dirty.

BEllE: How would you describe the dynamic between you and Mayor Wilder?

Hill-Christian: I enjoy working for him tremendously. What I like about him the most is I can argue with him and we have heated yet jovial discussions. What I appreciate most about that is, as a woman, sometimes people are condescending or disrespectful; I never get the impression from him that I'm anything other than a colleague and that he respects my opinion even if he disagrees with it. I get a kick out of that interaction. I can say what I think, he'll tell me what he thinks about what I said, but it's always respectful to my position and what I bring to the table — and I really appreciate that.

What strategies do you use to negotiate personalities at odds with each other?

First of all, I don't get personal. A lot of times when there's dialogue between individuals, ego gets involved. Personality gets involved. You tend to personalize the argument instead of dealing with the issue, and one of the things I learned early in my career is that automatically puts the other person on the … defensive. And I prefer to strictly deal with making sure I understand the person's issue, and asking them, "What is it that you want to walk out of here with? What is your objective?" So that they know I'm listening to them, and not dealing with what they look like, who they are, how they're dressed, whatever.

What's the most dangerous thing you've ever done — besides taking this job?

I think taking the job at the [Richmond Redevelopment and] Housing Authority, career-wise, was the most dangerous thing. About 60 days after taking over as executive director [in February 2004], we were raided by the FBI and the inspector general came in. I'd heard some rumblings that there were some problems, so it was probably the first job I'd taken knowing I might have to deal with some serious problems.

What qualities are important in leadership roles? Are there certain qualities you have that are specifically female?

If you get to the point where you think you're the smartest person at the table and you stop listening and learning — and there is always somebody there who can teach you something you don't know. I am always happy to surround myself with people who are technical experts and listen to what they say. I don't have a problem making a decision, but my ego is not so large that I have to be the grand pooh-bah wizard boss. And I ask a lot of questions. I say, give me the 4-year-old's version. … I'm not insulted by it. And I find when you do that, employees are more forthcoming with information and the end result is better.

Have your appointments in top positions at GRTC, RRHA and the Virginia Lottery opened the door for other women? Or do you think they were doors that needed opening? Should you have closed them on your way back out?

It's funny, before people ask me questions like that, I don't ever think of myself as the first woman or the first African-American, you know? I tend not to think about that, because I was just brought up to believe anything is possible for me, so you know, I don't think, "You've never had an African-American in that job before so I'm gonna go get it," you know? I hope that it does [open doors]. I don't know necessarily. I hope that my appointments make the people in positions of authority appoint more women. I hope that young women who are the ages of my daughters look at me and think, "I can do anything." That is more important.

How were you brought up? What was your family like? Were you one of 10, one of two?

One of two. I have a younger brother. I had a grandmother who lived next door and a mother who had 13 brothers and sisters. And always, always, "How are you doing?" Second question, "How are you doing in school?" Never with the thought that I would have anything other than a really good answer to the question.

And then as I got older, "Where are you going to school?" It was never "Are you?" It's "Where?" and "How far are you going to be?" So there was always this expectation all along the way that you will go to school, you will get good grades, you will get an education and you will try to accomplish something. So that you just understand that that's the norm. I didn't know that I had an option.

Is there an item that's traveled with you to each of those various desks? I see your lottery check over there.

There's a turtle over there that a friend of mine gave me, a purple beanbag turtle. And the purpose of the turtle is to remind you that no matter how afraid you are, sometimes you just need to stick your neck out.

What leadership qualities have you found to be most practical in the real world?

What's been the biggest change in your life since taking on the role of chief administrative officer? A lot more work hours, I would think.

You're a mom; you've got two daughters. How old are they?

So you're about done with the at-home mothering part of it.

Well, most of it. The youngest one is a senior in high school, so [I'm] keeping an eye on senior thesis at Community [High School] and making sure I've got everything scheduled so I can be where I need to be.

You've been a mover and a shaker and a favorite of just about everybody. You've obviously had to balance a lot to be a good mom. How did you do it?

I didn't get a lot of sleep when they were younger, and there was a time when I had either homework assignments because I was in [graduate] school or reading, but I'd do the story time no matter how tired I was. Fortunately, I had some really great bosses who knew I'd work until 11 o'clock when I could — but when I'd say, "I have to leave," I would leave and try to make it to the school plays and to the basketball games and try to be there to pick them up on time. In retrospect, I would have liked to have been home more, but you know, I had a really great support system. And they're two great kids, so it wasn't hard. They made it really easy for me because they've never been a problem.

You were a good administrator at home, too?

Maybe it was my [Virginia Department of] Corrections background [laughs]. No, seriously, I always would let them know that I loved them, but I wasn't necessarily always their friend. And they will say things to you like, "Yeah, mom would say things like, 'I don't care what everybody else's parent is letting them do, the answer is no.'" They could get mad at me. That was OK. I wasn't trying to be their buddy. But I think we had the kind of relationship where they could tell me everything. Sometimes I'd rather not know. ...

I really have enjoyed the relationship that we've had — especially as they get older and they've started to share with me life as they know it as teenagers.

So what lessons do you hope your daughters will learn from the choices you've made personally and professionally?

I hope they learn they have choices. I don't care if they decide to sell T-shirts at Virginia Beach, as long as they're happy.

You're known for your stylish appearance. What personal touches do you bring to your personal attire?

I have no clue. Years ago, I modeled for the Miller & Rhoads Tea Room and I used to do some modeling for Thalhimer's when they had their trunk shows. That's about the extent of my fashion training.

Are you fashion conscious?

I'm most comfortable in a pair of jeans, some boots and a jacket or sweater. This is my 9-to-5 costume.