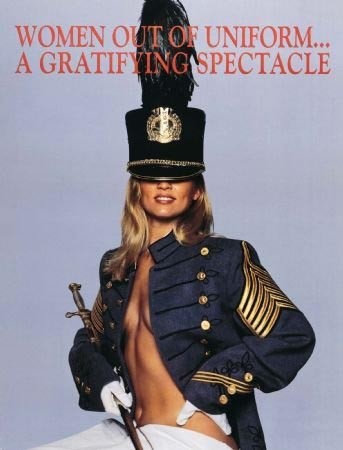 Call it appropriate. Call it ironic, but the scantily clad model in the controversial VMI poster works for McGuire Woods Battle & Boothe, the lead attorneys for VMI's battle against coeducation.

Model Tess Vezey, who is believed to be a documents clerk at the Richmond firm — although she would not confirm the job title — says she posed for the poster photo before she was hired at McGuire Woods. She also said, in a telephone interview, that she was surprised by the attention the poster received. Did she take any heat for it? "Yeah," she said. "It's over with now," she said. "I really can't talk about it."

... The poster says, "Women at VMI, a Gratifying Spectacle." The photo shows Vezey with a VMI uniform coat unzipped, white pants drawn down to her pelvis. The junior class printed 5,000 copies last fall to raise money for the annual ring figure dance. VMI spokesman Mike Strickler says various reprimands and disciplinary actions came down on the cadets involved, but no one was suspended or expelled. — John W. Maloney