A daughter remembers her Virginia seamstress mother who took on Jim Crow and the poll tax. 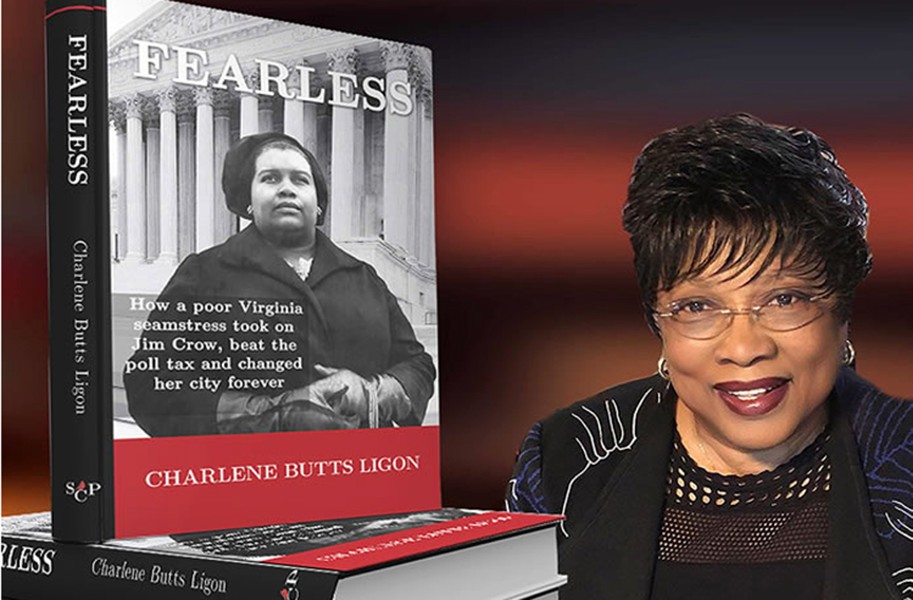 Author Charlene Butts Ligon and her book will be featured as part of the Banner Lecture at the Virginia Museum of History & Culture.

Charlene Butts Ligon was 12 years old when she first carried a protest sign. The sign read, “In War We Fight Together. Why Not Sit Together in Peace?”

The occasion was a 1961 exhibition game between the Washington Redskins and the Baltimore Colts, sponsored by a Norfolk Kiwanis Club. Ligon’s mother, Evelyn Butts, who’d worked as a cook at a local department store and later did domestic work while working from home as a seamstress, was also a community activist who’d taken issue with the game. Besides the seating in the stands being segregated, the Washington Redskins, alone among NFL teams, refused to hire black players. Additionally, the Kiwanis Club was an all-white organization and the game was being held at the local campus of the College of William & Mary, a state-supported facility. Butts was part of the group who organized a demonstration.

“Mama brought my sisters and me to the protest and before the game, two black players on the Colts team, Lenny Moore and Johnny Sample, came out to talk to us while we were protesting,” Ligon recalls. “Then they went back inside and helped the Colts trample the Redskins, 41-7.”

Ligon, a retired Air Force master sergeant, is the chair of the Sarpy County Democratic Party and secretary of the Nebraska Democratic Party. Her new book, “Fearless: How a Poor Virginia Seamstress Took on Jim Crow, Beat the Poll Tax, and Changed Her City Forever,” will be the subject of a Banner Lecture at the Virginia Museum of History & Culture.

Butts was known as a mother and activist who worked hard to improve the lives of family members and neighbors, while also leading battles against discrimination in employment, public schools, neighborhood services and voter access.

“My mom believed in the American ideal and she knew the poll tax was an impediment for black and poor people,” Ligon says. “She always said that voting is your voice and she realized you must have people in public office who believed in that ideal.”

Ligon says her mother knew that to get rid of Jim Crow laws and improve such things as sidewalks, streetlights and other city services, people needed to have a voice and their voice was their vote.

Voting, though, is only part of full citizenship.

“I believe my mom’s gift was in how she combined her political citizenship with her everyday life of being a good neighbor, especially with other women,” Ligon explains. “She motivated voters with her personal interaction, making politics come to life and helped voters establish a personal connection with the electoral process.”

Butts went on to become a voting rights champion, eventually filing the first suit seeking to have the poll tax declared unconstitutional. In March 1966, the U.S. Supreme Court ruled that the poll tax in all elections violated the Constitution, finally ending its use in Virginia.  Her daughter recalls how she dedicated her time to voter registration before and after the poll tax was repealed.

“She learned the rules of voter registration and gave confidence to first time voters,” Ligon says. “She traveled around with a voting machine to demonstrate how to use it.”

While researching her book, Ligon spoke to Virginia Sen. Yvonne Miller in October 2007. Miller recalled Evelyn Butts as a person of strong principles who worked hard to help people understand the process, register them and to turn out votes.

“Nobody since her has been able to do that kind of registering of people or to turn out that kind of vote or to keep the cohesion in the community as long as she kept it,” Miller recalled. “She was thought of as the mother of the community.”

As important as the landmark poll tax case was, Butts’ involvement in the Civil Rights Movement went further. As a grass-roots civil rights leader, she also helped organize a two-part protest of rundown and inadequate conditions at the all-black Booker T. Washington High School and the slow pace of school integration in Norfolk. She fought to save the Oakwood community from redevelopment and served on the Norfolk Redevelopment and Housing Authority board.

When her mother’s photo was on the front page of the newspaper, Ligon couldn’t wait to take a copy to school to show to her government teacher and class.

“I was extremely proud of mama,” she says. “She had a loud voice and she always spoke with confidence. I was proud to be her daughter.”