Grace Potter and the Nocturnals at the National 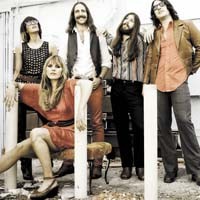 Grace Potter's attractiveness can be culled by the way she flirts, not only because she's quite the looker but also because she successfully grazes her expressive vocal talents in the realms of '70s country rock, roots blues and even jazz, feeling like some beautiful cross between Janis Joplin and Norah Jones. Potter and her instrumentally skilled backing band, the Nocturnals, gained some local notoriety in their native New England with two independently released records and some substantial word of mouth. Then in 2007 they garnered national attention with their major label debut, “This Is Somewhere,” earning all sorts of air time on television with the soul-burning piano ballad, “Apologizes.” With their next album, “Medicine” slotted for release this fall, Grace Potter and the Nocturnals are scheduled to perform at the National on Thursday, Oct. 22, at 7 p.m. $15.