Gov. McAuliffe Urges Cooperation on Economy in State of the Commonwealth Address

by Patrick Wilson and Bill Sizemore 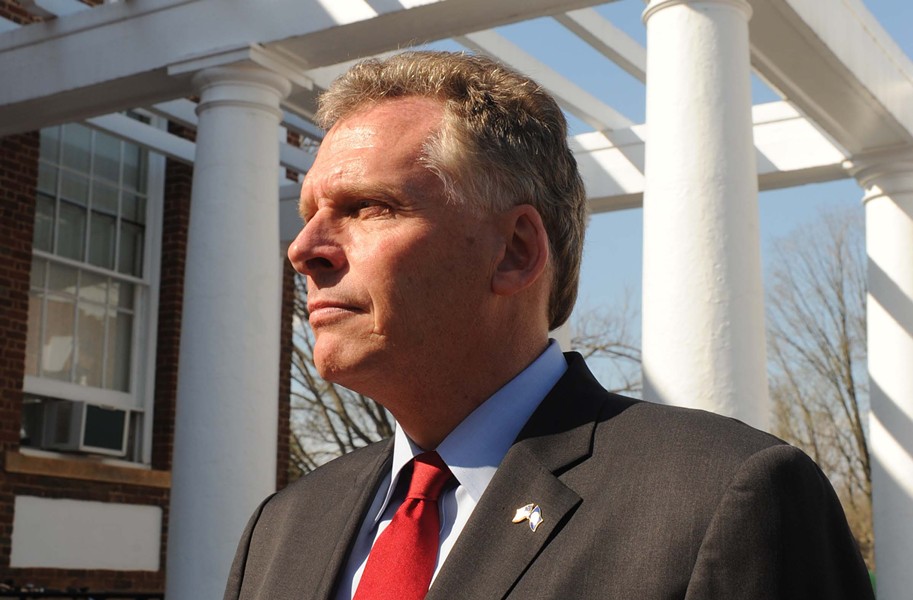 Gov. Terry McAuliffe told lawmakers Wednesday he’s prepared to work with them on bills that help the economy but would veto pro-gun legislation or bills hindering gay or abortion rights.

The Democratic governor addressed lawmakers in the Capitol during his State of the Commonwealth speech with typical enthusiasm, saying he and the Republicans who control both houses of the legislature have a chance to put partisan politics aside to help Virginia’s economy, diversify its workforce and train students for good jobs.

“It is my hope that our work together this session will be devoted to productive areas where there is room for compromise, not political sideshows,” McAuliffe said. “We must always remember why we were elected to office in the first place.”

McAuliffe outlined ideas he’s already promoted, rehashing the more dire budget scenario of several years ago when the state faced a shortfall, as well as the number of economic development projects announced in his two years as governor: 561.

With a reprieve from sequestration and a better revenue forecast, McAuliffe said, he and lawmakers should spend the 60-day session working on the economy.

“Our successes in global trade are at the center of the important work that we are doing to build a new Virginia economy,” McAuliffe said.

He cited results from his trade missions: opening up India to Virginia apple exports and efforts to lift the ban on poultry exports to Oman and Kuwait.

“Just this week, we received our first-ever order for two containers of poultry to be shipped to Oman,” he said. “And last week, we traveled to Cuba, and I’m proud that we were able to forge a deal between Virginia’s port and the new billion-dollar Port of Mariel.”

The 2016 legislative session opened earlier in the day, with the House and Senate convening at noon. The House elected Bill Howell, R-Stafford County, to an eighth term as speaker.

In prepared remarks, Howell said he did not take lightly his duties to the people and, like McAuliffe, said progress can be made when ideological positions are put aside.

“We must continue to be good stewards of taxpayer dollars,” Howell said. “While Washington drowns in deficits and debt, we have a constitutional obligation to balance our budget.”

Republicans will be pushing for a constitutional amendment for charter schools and considering bills to change or repeal Virginia’s certificate of public need requirements, which some lawmakers say hinder competition in health care.

McAuliffe touched on several controversial issues in his hourlong speech.

For the third year, he called for Medicaid expansion under the federal Affordable Care Act.

“Each day that we do not close the coverage gap – each day – we forfeit $6.6 million in federal money,” he said. “Every single month, we waste $15 million in costs to state taxpayers that could be covered entirely with federal dollars.”

Republicans, expressing philosophical opposition to the program and concerns over its cost, have repeatedly said that Medicaid expansion is dead on arrival, and Howell repeated that Wednesday.

Del. Chris Jones, R-Suffolk, chairman of the budget-writing House Appropriations Committee, restated Republicans’ rejection of Medicaid expansion in comments to reporters after the speech. “We’ve been very clear from day one that’s not going to happen,” Jones said. “So we were unmoved by the plea tonight in that regard.”

McAuliffe also called upon Republican lawmakers to elect his choice for the Virginia Supreme Court: Justice Jane Marum Roush, whom he appointed to the bench last year. Her appointment expires 30 days after the start of the General Assembly session.

Republicans, miffed that McAuliffe had not properly consulted them, plan to appoint Rossie Alston Jr., a justice on the Virginia Court of Appeals, making Roush’s time on the higher court short-lived.

“I do hope that we will treat our newest Supreme Court justice with the respect that she deserves as a jurist who has served our commonwealth with honor for 22 years,” McAuliffe said. “Allowing politics to deny this qualified and distinguished jurist a full 12-year term would send a dangerous message about this commonwealth’s respect for the independence of the judicial branch.”

Republican leaders made it clear they aren’t backing down in the Supreme Court impasse. Speaking to reporters after McAuliffe’s speech, Howell said Republicans believe Alston would make a better justice than Roush.

“He’s more qualified, we think,” Howell said. “He has appellate court experience.” And the speaker chided Roush for standing beside the governor at a news conference about her appointment last year, suggesting she might have violated the judicial canon of ethics.

”This is a defense contractor who is diversifying and creating jobs for Virginians,” he said.

Also in the chamber and recognized by McAuliffe was Anthony Harris of Portsmouth, a veteran who works for Virginia Supportive Housing and was able to help a homeless veteran who was living in a tent in Virginia Beach, McAuliffe said.

The full text of Gov. McAuliffe's State of the Commonwealth address is available here.