A family man risks it all for the cha-cha. 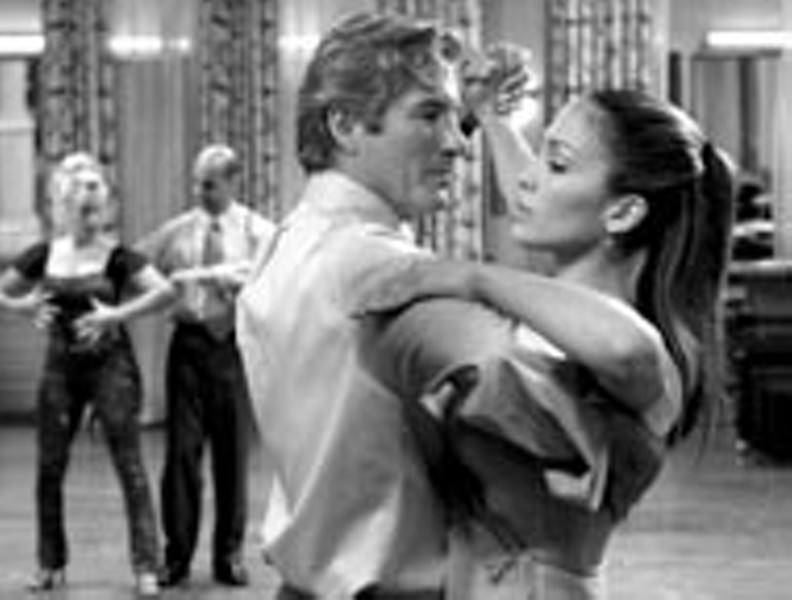 That's the setup for the breezy "Shall We Dance?" a remake of a box-office-busting 1995 Japanese film and yet another exploration of one man's attempt to shake off middle age. Richard Gere stands in for any of us who know we've never had it so good, but still itch for a certain something to propel us from happiness to ecstasy.

Director Peter Chelsom would seem to be the right man to tell this story, but the charming daftness of his exuberant "Hear My Song" (1991) is evident only on the margins of this smotheringly well-intentioned romp.

Gere plays John Clark, whose generic name puts us on guard against the shopworn formulas that jostle against one another to form a kind of plot. Lured into the dance studio by Jennifer Lopez's siren stare, he gets hustled into a beginner's class led by the boozy, dilapidated Miss Mitzi (the engaging Anita Gillette), while Lopez lavishes her sultry attention on advanced students in the distance.

To his surprise, Gere discovers that dancing itself gives him the lift he thought only adultery would provide. By degrees, he slips into the demimonde of ballroom dance, inhabited by obsessives forever practicing their dips and sewing sequins on their costumes late into the night. He even discovers that a hypermasculine co-worker (Stanley Tucci) transforms himself nightly into a raven-haired Fabio with a jones for the tango.

Back at home, his wife, gracefully played by Susan Sarandon, grows suspicious of her hubby's mysterious absences and hires a private detective (Richard Jenkins, the ghostly father on "Six Feet Under"). Predictably, everything comes to a head at the big dance competition.

Gere's part cries out to be played by a William H. Macy or a Bill Murray, someone whose tinge of desperation might lend a measure of pathos or danger to the proceedings. Gere, however, is firmly stuck in Mr. Sensitive mode. One glance at his confidence-inspiring hairdo and impeccable tailoring and we know he'll never stray far from righteousness.

Looking at him now, it's hard to recall the days of "Breathless" (1983) and "American Gigolo" (1980), when he seemed poised to market himself as a milk-fed Jean-Paul Belmondo. Here, even when he finally works up the nerve to flirt with Lopez, his need to telegraph sappy good-heartedness with every shot drains away all trace of eroticism. He's like a man who's learned how to deal with fiftysomething doldrums from movies on Lifetime.

Things tend to work better when Gere isn't around. Jenkins is captivating as the private eye, an over-the-hill rake mellowed by romantic failure, waning desire and lots of cheap liquor. He falls for Sarandon, but he's too wisely ironic to take his infatuation as anything but one of Cupid's dead-end pranks.

And then there's Stanley Tucci, who now and then takes over the film with near diabolical gusto. When he's writhing on the dance floor, his wig whipping about his head like a pirate's flag, he's got the incandescence of the young Jackie Gleason.

No slouch himself, Gere is at his best when he shuts his mouth and throws himself into a waltz. The dance sequences have admirable energy, but sooner or later, the movie has to wander back to its droopy emotional core.

Perhaps sensing that the story at the center of the film lacks much credibility, screenwriter Audrey Wells ("Under the Tuscan Sun") tries to spice things up by making Sarandon, who's shown nothing but bemused acceptance of her husband's secret hobby, suddenly turn into an avenging harpy. Like all the minor crises that keep plot limping along, it's just a phony tactic to delay ** S