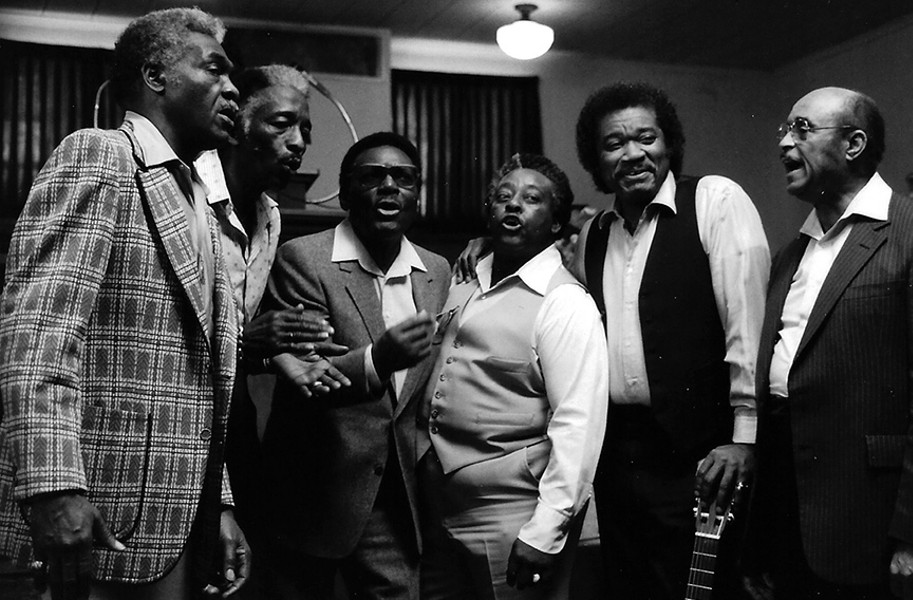 A still from early ’80s footage of the gospel group, the Soul Stirrers, shot by postwar artist Bruce Conner. A VCU film professor is making a new doc out of 40 hours of footage.

If there’s a local documentary filmmaker whose work you should seek out and follow right now, it’s Sasha Waters Freyer.

The VCU film professor’s fascinating last documentary, “Garry Winogrand: All Things Are Photographable,” about a legendary Bronx street photographer, was a hit at South by Southwest (special jury prize winner) and Sundance, with New Yorker critic Richard Brody calling it one of the best films of 2018: “revelatory … probing and insightful.”

In late 2018, I met Waters Freyer, then chairwoman of the photography and film department, and her husband through a mutual friend over dinner at Mom’s Siam. She mentioned her interest in possibly making a documentary about Jonathan Richman, a musician I knew from living in the same small Northern California town. A known Luddite, Richman rarely does media interviews and handles most requests via snail mail.

That project is still in the early stages, but Waters Freyer has begun working on her next documentary film and it’s another thrilling subject. Still untitled, it's being assembled from a 40-hour treasure trove of previously unseen, historic footage of one of America's greatest gospel singing groups, the Soul Stirrers from Trinity, Texas.

In 1984, legendary artist Bruce Conner, one of America’s first true multidisciplinary talents, started shooting a documentary (“By and By”) about the Soul Stirrers, an early African-American traveling gospel group known for once featuring the vocal talents of future soul legend, Sam Cooke. Conner died in 2008 before finishing his passion project, which had begun through a friendship with one of the group’s members and a planned reunion concert in Richmond, California that was to be documented.

Waters Freyer speculates that the project wasn't well-suited to Connor's "kinetic, fast-paced editing." The artist is known primarily for his short films, considered by many as precursors to the music video. “When you look at his work more broadly, so much is informed by cultural irreverence," she says. "But he was deeply respectful and reverent toward gospel. There’s a sincerity that marks it as distinctive from his other work.”

Now she will get her turn with the material. Having received the approval of the Conner family estate, as well as the crucial participation of two of Conner’s close friends as producers, Waters Freyer will have access to all 40 hours and will begin shaping them into a feature-length documentary that will “not be a posthumous Connor film,” she says, “but rather an entirely new work.”

The producers include San Francisco punk icon Henry Rosenthal, former drummer for the band Crime and producer of the doc “The Devil and Daniel Johnston,” as well as Michelle Silva, Conner’s longtime assistant. Rosenthal owns the rights to the film while Silva helped run the film catalog for Jean Conner, the artist’s widow. Freyer met Rosenthal through her sister, who lives in San Francisco.

All of the 16 mm “By and By” footage is from 1980s-era Betamax transfers, Waters Freyer says, which had been stored for years at the University of California Los Angeles Film and Television Archive. This is all being transferred to a new edit that will be much more crisp and beautiful, she says. It's an expensive process, but VCU has given her a grant of $50,000 and she’s gotten another $20,000 from the Catapult Film Fund, while waiting to hear back from the National Endowment for the Arts. A typical example of one of her expenses: She had to buy a 96-terabyte drive to store everything.

Many longtime Conner fans consider this a lost holy grail of his film work.

“We finally get to see this,” says veteran music writer Mike McGonigal, editor of Maggot Brain magazine, financed by Jack White of Third Man Records. McGonigal is also known for producing some great gospel compilations from Detroit. “This is like a Venn diagram of my truest loves, which is a circle. Tell [Waters Freyer] I love her.”

The director first became aware of the material at the San Francisco Film Festival in 2018 and has seen only an hour of footage so far. She’s anxious to see more.

“I feel like this friendship between Bruce and the Rev. Paul Foster [a member of the Soul Stirrers] is an important part of the story,” the director says. “But I think the film will mainly focus on the Soul Stirrers. Henry [Rosenthal] was deeply involved, and Michelle has seen more footage than I have. We all are confident there is a film in there.”

She says they don’t want to do any more filming, but may end up doing some additional audio interviews to help provide context. The Soul Stirrers were an innovative group, but are still relatively unknown to modern audiences. That’s a shame because the group’s impact on popular music is undeniable. Singer R.H. Harris once claimed to be the first male to sing falsetto in American music, noting he was just copying the birds.

Waters Freyer isn’t sure how long the project will take to complete, there may be some traveling in terms of interviews. But one thing is certain: She has a lot of editing in her future, so prioritizing media management is important.

“Keeping everything organized as I’m going through and looking at everything, taking really careful notes the first time I look at things,” she explains. “When dealing with a lot of material you can lose sight of what’s important. I like to take notes on my initial gut reaction and emotional response to something, which helps when I’m editing.”