Author translates life in the new “Ashes to Water.” 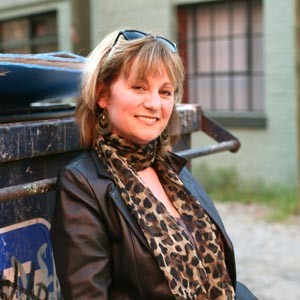 Irene Ziegler knows dialogue, dialect and how to create a scene that compels you to flip the page in a hurry. An actor and a playwright, she's used all of the well-honed tricks of her trade to write her seventh book and first novel, “Ashes to Water” (Five Star, $25.95).

“I think it's inevitable that one informs the other,” says Ziegler, who's had roles in numerous plays, television series and movies, including “The Contender” and “GI Jane.” Author of the play “Full Plate Collection,” and founder and director of Virginia Arts and Letters Live, Ziegler is adept at translating life — and fiction — onto the page and the stage. “I enjoy writing dialogue because I would love the opportunity to say this stuff,” she says. “I love it when I read a character and can tell so much about who they are by the way they talk.”

Think “The Wire,” 1980s-style, before cell phones or the Internet, and set in Hades. “Ashes to Water,” deemed a “pitch-perfect literary thriller” by acclaimed Southern writer Pinckney Benedict, is the sequel to “The Rules of the Lake,” a collection of short stories that Ziegler published in 1999. Suicide, murder, arson, ghosts, evil spirits and drug addiction play starring roles alongside the feisty but troubled sisters Annie and Leigh Bartlett, who live in the fictional town of DeLeon, Fla. It's a place that's based on Ziegler's hometown of DeLand.

“A lot of it was semiautobiographical, and then I got better at making things up,” she says. “I used the setting and then imposed the relationships and conflicts. My father is not a feckless womanizer and my mother is still alive. But I did grow up on a lake and I did live next to a pedophile.”

Moved by the fires that ravaged Florida every summer during the early part of this decade, a family member who struggled with addiction and the bitter divorce of a close friend, Ziegler gives as much weight to the fast-paced detective whodunit as to the internal struggles of her characters. Pyromaniacs and firefighters, womanizers and women scorned, dope fiends and recovering alcoholics, Seminole Indians and land-starved developers all have their secrets, their motives and their days following the mysterious lakefront murder of Ed Bartlett.

What began with a tightly wrought 32-page outline that took Ziegler two years to write, two years to sell and a year and a half to put into print, deviated from course. “Round about page 18,” she says, “the book went its own direction and I let that happen. It sounds so disingenuous to me when writers say, ‘the characters just take over.' The characters don't just take over. You have to make choices and I made choices grounded in solid scene building.”

“Ashes to Water” finds its resolution, but it certainly isn't packaged neatly with any sort of shiny bow. “I am fond of the story where the evil forces do, in a way, win, but they're harder to write because you have to make sure it's still extremely satisfying,” the author says. That Ziegler has begun scheming about how to turn her sequel into a trilogy is satisfying indeed. S