Swift Creek Mill's “Of Mice and Men,” unlike its main character, knows its own strength. 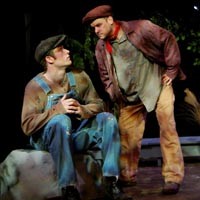 Director Tom Width orchestrates some gripping moments in Swift Creek Mill's “Of Mice and Men,” making good use of both the mounting tension inherent in John Steinbeck's classic Depression-era tale and the significant talents of his cast.

The best example comes late in the second act when Lennie (Jonathan Conyers), a mentally deficient ranch hand who's sweet as a lamb but strong as an ox, shares an awkward conversation with a beautiful but disenchanted flirt (Stefani Zabner). Their interaction is already fraught with anxiety because of ample foreshadowing about Lennie's tendency to “do bad things” and Width patiently lets the interlude build toward inevitable disaster.

Masterful scenes like this one plus a wonderfully evocative set (designed by Width and expertly lighted by Joe Doran) overshadow the few problematic elements of the production. The story follows Lennie and his friend and guardian, George (David Janeski), who move from ranch to ranch trying to scratch together enough money to buy a stake of their own. The play captures four days when their luck seems to have finally won out over the perpetual snags in their plan.

Janeski does impressive work as George, but amidst so many extreme characters, he seems a touch bland. On the other side of the spectrum, Tom McGranahan's rambling, mumbly Candy is occasionally incomprehensible. Michael Hawke exudes calm authority as expert mule driver Slim, but Paul Deiss doesn't quite catch fire as the hot-headed boss's son, Curley.

Still, Conyers is a revelation as Lennie, making the man-child believable, empathetic and tragic. And in a potential one-note role as Curley's wife, Zabner oozes sexuality in the reflexive way she offers her dAccolletage for view without sacrificing the hint of emergent humanity in the character. Regardless of any rough spots, under Width's sure direction, “Of Mice and Men” is thoroughly captivating through the powerful conclusion. S

“Of Mice and Men” plays at Swift Creek Mill Theater in Colonial Heights through March 14. Call 748-5203 for tickets.