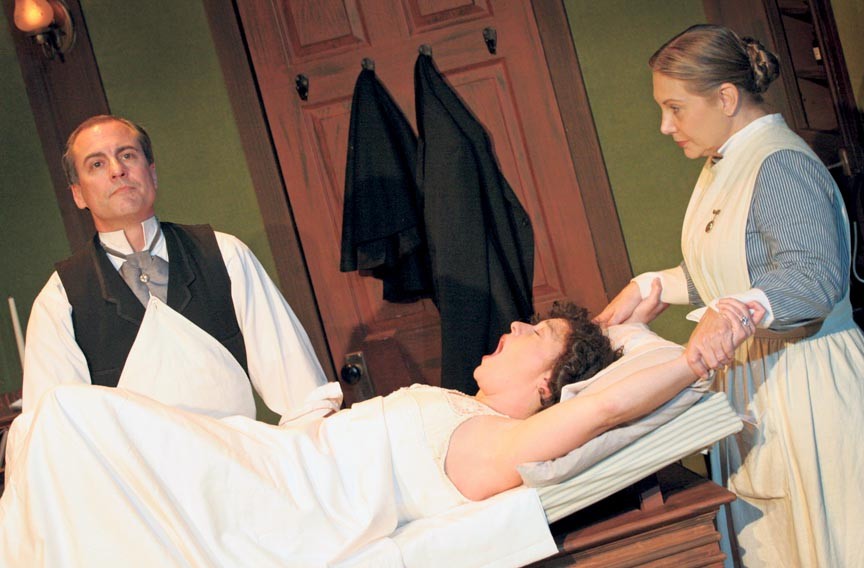 The young woman enters the physician's office and sits down.

She tells the good doctor that she's having trouble sleeping. She's nervous, and hasn't been very hungry as of late. The doctor suggests a new treatment. The woman reclines, and using his hands, the doctor manually brings her to orgasm.

"Hysteria was basically classified as anything that showed weakness in women," says Laine Satterfield, who portrays a patient in the show. While the play's subject matter might be titillating, Satterfield says that "Next Room" is a love story at heart.

"On the outside, the play appears to be a pretty straightforward drawing-room comedy, but there's a lot of meat to it," says Larry Cook, who plays a doctor treating hysteria. The show is a mixture of farce and drama, he says, and its treatment of women in the Victorian era parallels many political issues regarding women's bodies today. Both actors praise Ruhl's script and her ability to make the heightened formal speech of the era accessible to contemporary audiences.

Next up for Cadence is Martin McDonagh's thrilling "The Pillowman," which opens Oct. 19. The play follows the interrogation of a writer about a series of gruesome crimes that increasingly resemble his fictional tales.

"That piece is particularly well-loved in the theater community," Johnson says. "We've had almost every man in town audition for the show."

As for "In the Next Room," the company promises a surprise at the climax.

"It's really about connecting people to what they want in life and what their passions are," Satterfield says. "It's a beautiful mix of action and words. Audiences should prepare to be moved." S