In "The Guard," you'll find cop you'd want to party with. 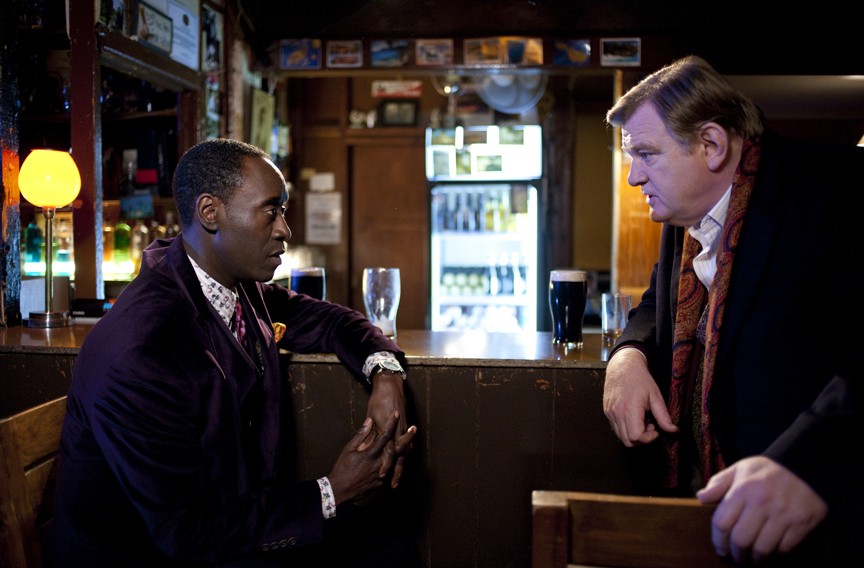 In the wry police drama "The Guard," Brendan Gleeson plays Sgt. Gerry Boyle, of the Garda, the police force of the Republic of Ireland. Maybe it's not surprising that he has his own ideas when it comes to upholding the law.

The movie opens on a rural road in Galway, in the west of Ireland, where a group of rowdy young men tear up the road in a sports car while ingesting various substances. They whiz by a parked patrol car and we hear a crash. Gerry responds to the sound of the accident with a shrug of his facial muscles. The kids, sadly or not, are dead, but Gerry, standing among the bodies, seems unmoved. He rummages through the wreckage and comes up with a bag of drugs. Standing up, he discards the pills and nimbly fingers a blotter tab (presumably of acid), which he places on his tongue and declares, as if sipping coffee, "What a beautiful fucking day."

It's too bad Gleeson isn't in more movies. It's difficult to recall a role of his that's not enjoyable, even in a less than stellar film. As much as it can be said to be a good movie, "The Guard" is Gleeson, who seems to be revisiting the role he played for John Boorman in "The General," a biopic of Irish gangster Martin Cahill. Impudent from head to toe, Gerry's on the other side of the law but just as disdainful of it. When Gleeson is on the screen the movie comes alive with his deadpan Irish wit, weighted by a stolid gaze and leaden self-satisfaction. When he's absent everything seems empty and less important. Written and directed by John Michael McDonagh, the result might have been better if it had been solely about Gerry, but it turns out he isn't the only cop on the beat.

Soon we're introduced to FBI agent Wendell Everett, played by Don Cheadle as a serious, steadfast G-man. Agent Everett has been called to Galway to help stop a drug-trafficking ring, and we think: really? He's been called all the way to Galway to help stop drug trafficking? The details are fuzzy and the concept a stretch, but the movie's purpose is clear. It wants to be a buddy-cop movie, an Irish "Beverly Hills Cop," with the white guy the cut-up and the black guy his foil — in the process doubling down with a fish-out-of-water scenario. Agent Everett, of course, finds the locals puzzling, not least Gerry, who goes out of his way to take the piss out of him.

"Did you grow up in the ghetto?" Gerry asks over coffee, completely straight-faced. Everett reveals he had a privileged background, including private schools and ski trips to the Alps. "I thought blacks couldn't ski," Gerry declares with feigned surprise, continuing: "Maybe that was swimming." Everett is annoyed, but he knows Gerry is the canniest man on the force, repeatedly visiting him to compare clues. Meanwhile, we get snippets of Gerry's debauched private life, including a lecherous tussle with two prostitutes. I thought this was where the movie began to lose its way. Are we supposed to be scandalized? Everett makes a rather obvious statement about Gerry on the way to a crime scene: "I can't tell if you're really dumb, or really smart." Well now.

Gerry and agent Everett make an interesting pair, but not quite a memorable one. The movie never establishes the bond necessary for an engrossing buddy picture, meandering toward the point where Gleeson and Cheadle team for a showdown. Thankfully avoiding broad comedy, McDonagh doesn't always dig beyond the obvious, either. Secondary characters are thinly drawn, especially the bad guys, merely stock ruffians with pug faces and sneering boasts. The only thing at stake is a shipment of drugs, a conventional crisis completely out of place with Gerry's unusual irreverence. He deserves to encounter criminals — and docks — less common.

What are we supposed to take away from our encounter with Gerry and his world, beyond a few laughs? At its most misguided, "The Guard" makes its best character disappear. He's certainly missed, but ultimately you realize the movie was never getting anywhere anyway, with or without him. Gerry Boyle is a great cop. All he needed was a slightly better story. (R) 96 min. S