Courtney Johnson photographs the mysterious light beneath the water. 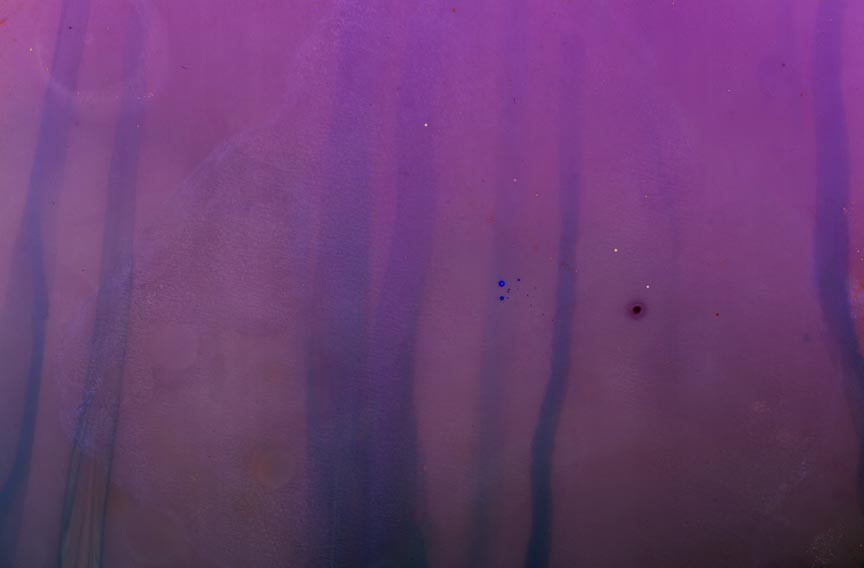 Visit any of the 19 public piers on North Carolina's coast, and you'll find fishers of all ages and experience casting lines for such species as speckled trout, Spanish mackerel and bluefish. Among them is Courtney Johnson, lowering a line in search of a different kind of perfect catch: a photograph.

Her series "Light Lure" isn't named just for its ability to lure the attention of viewers — though it achieves that goal. The work is captured by using an underwater pinhole camera, fishing weights and a fishing line, revealing a mysterious abstract realm of colors and forms just off the Atlantic coast. After moving to North Carolina and teaching darkroom photography in Wilmington, and perhaps influenced by her curriculum on pinhole photography (as well as the desire to spend more time on the piers), Johnson began brainstorming a new pinhole camera design.

Such cameras are simple and relatively easy to construct. All you need is a lightproof container with a small hole (hint: point of a sewing needle) in the side that acts as a lens. The physics of light allow an inverted and reversed image of the scene outside to enter the camera, be recorded on the film or photo paper inside.

Johnson takes it in a new direction, however, in her design of an underwater version. It uses a system of fishing line and tins — wafer cookie and pineapple juice tins, to be exact — where a larger one overlaps the smaller. Johnson waterproofed the camera by using clear waterproof tape to seal the pinhole while allowing light to enter, and waterproof glue to attach the lens plate to the cookie tin. Once lowered into the water, the outer tin is pulled up by the line and acts as a shutter, allowing the light filtered by the Atlantic Ocean to enter the camera. The results are mysterious and magical.

"I like that the images look very different from what I expected and from anything I've seen before. I like that they make my imagination run," Johnson says.

While she uses a certain methodical approach — 30-minute exposures, 15- to 20-foot depth of the camera in the ocean — much of the process is variable and left to chance. Time of day, weather conditions, and even water quality influence the images. And while the cameras are mostly waterproof, there's still room for interaction between the film and the saltwater that sometimes leaks in, resulting in the spectacular streaks, specks and bubbles. It isn't necessarily what you see in the watery fields of color but what you don't that entices the eyes. The imagination is given total freedom. What made that blur of color or that speck? Was it a fish swimming by, a piece of seaweed or algae, or some gelatinous invertebrate oozing along past the pinhole? The sense of exploration and mystery plays a huge part in the series.

Johnson is always curious to see what comes up. Shipping the film off to be developed adds more time and curiosity to the practice. "The whole process required a lot of patience," Johnson says. "I think it also made me more excited when the film came back too, because I had no idea what I got and I'd waited so long to find out."

Another benefit is the stories and interactions with those who fish off of the piers. Many fishers take interest in the project while Johnson is at work. "Everyone on the piers was so enthusiastic and interested in my project," she says. "I did a lot of explaining the physics of light and how pinhole cameras work. I also learned how to identify several fish, spots and sheepshead in particular." One exposure, taken from Nags Head Fishing Pier in 2012, displays incredible energy as the camera filled almost to the brim with water, making evident the turbulence and strength of the ocean waves as the devastating Hurricane Sandy approached the shore. Many piers were split in two by the storm but some have been rebuilt.

Storms may hinder parts of the process but be an interesting variable in others. "When I was at Nags Head Fishing Pier in the pouring rain," Johnson says, "I didn't have a rain jacket or anything and my jeans and shoes were collecting puddles. I was slipping around but I was still trying to take pictures. One guy was putting on yellow rain pants and jacket and I went over to him and asked if I could photograph him. He looked at me and paused a few seconds and then said, 'You know we're crazy, right?'"

Johnson smiled, nodded in agreement and took his picture. S

Light Lure will be on display at Candela Books and Gallery from Sept. 6 to Oct. 19, with a preview and artist talk Thursday, Sept 5, from 5-8 p.m. For information visit candelabooks.com or call 225-5527.