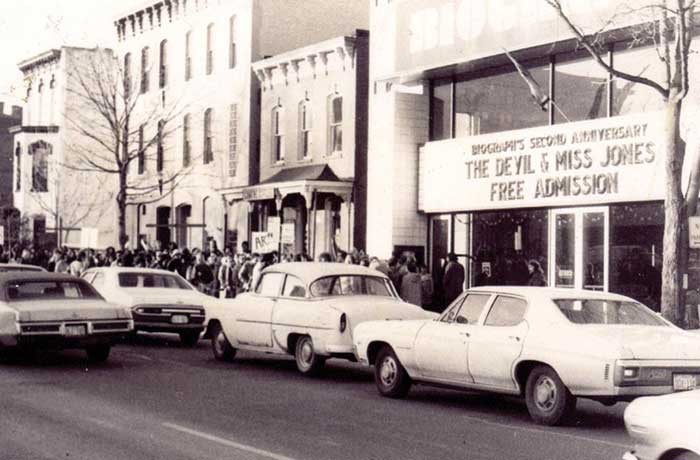 Imagine Monroe Park teeming with hippies. Nixon is president and Vietnam-protesting college students have just been shot and killed at Kent State University by the Ohio National Guard. The once-bohemian Virginia Commonwealth University area of Grace Street, which today surges with young students trailing their cell phones to and from class, has its own repertory art cinema, the Biograph, with a huge glass storefront offering a peek into the counterculture.

Terry Rea, longtime local journalist, publisher, cartoonist and former manager of the Biograph, recalls the period well for someone who was actually there. Located at 814 W. Grace St., the theater lasted from 1972 to 1987, before closing primarily because of the national death of repertory cinema by cable television and video.

"A lot of people found out about great art films there. We were expanding minds," Rea says. "That made up for the horrible seats."

The celebrated loyalty of the Biograph audience is one reason former regulars come together every 10 years to hold an anniversary event. But this year is different. This is the kickoff to an informal series with the James River Film Society titled "The Golden Age of Repertory Cinema," which hopes to raise funds to help establish a small storefront cinema in downtown Richmond.

For the Biograph's 40th anniversary, organizers will show a double feature including a newly restored 35 mm print of the French new wave classic, "Breathless" (1960), and the overlooked, Dalton Trumbo-adapted "Lonely Are the Brave" (1962) with Kirk Douglas, who once called it his favorite film.

"All these years later, the education process with films has taken place," Rea says, noting that film studies and accessibility are far more advanced than in the '70s. "Now there are probably enough people to support a storefront theater."

Richmond's Biograph was the younger sibling of the original Biograph Theatre in Georgetown, whose owners worked with local Richmond investors, including Morgan Massey. They believed the Fan District was going to become another Georgetown, a place where art films would be appreciated; they got a 20-year lease for $3,000 a month through a federal program for at-risk neighborhoods. But Rea soon discovered that when students left town, crowds thinned out.

Besides showing unique films — as wide-ranging as Fellini, Warhol and Hal Ashby — the Biograph was the site of many parties, art shows and late-night shenanigans. It was one of the first theaters to regularly show midnight movies, advertised with clever radio spots by Rea and Dave DeWitt of WGOE-AM (now the Albuquerque-based cookbook writer and food guru, "The Pope of Peppers").

Once the theater began showing porn-chic sensations such as "Deep Throat" to help pay the bills, the scene could get chaotic. A local man named Reverend Blue and his group of bullhorn-wielding "Jesus freaks" would line up across the street, warning moviegoers that they were headed to hell. "It made people want to be there even more," Rea recalls. "The line was like a huge tailgate party."

Local screenwriting teacher Ted Salins frequented the original Biograph in Washington as a teenager, and was a regular at the Richmond location. "It was heaven for a film aficionado: warm and comfortable with a pinball machine in the lobby," Salins says. "I doubt I missed any movies that shouldn't be missed. ... John Waters even came to Richmond to screen 'Polyester' early."

James Parrish, co-founder of the James River Film Society, recently returned from the Sundance Film Festival in Utah, where he attended Art House Convergence, a meeting of mostly nonprofit art theaters from around the country.

"I was encouraged by their success," Parrish says. "And I think there are still people in Richmond who want to build a local film community and see movies together."

Parrish hopes to find space to convert a storefront into a small, 100-seat or so film theater that would contribute to a stronger arts district downtown, while thrilling local film buffs. He's received positive feedback from city economic development officials and a few potential investors, he says, but still characterizes the project as exploratory.

The James River Film Society has about 50 members paying $25 a year and Parrish notes that the number will need to grow significantly. The next event in this series will be a smaller tribute to the classic 1981 Louis Malle film, "My Dinner with Andre," filmed at the Jefferson Hotel — and might include the same meal of Cornish hen and wild rice that helped make actor Wallace Shawn so chatty.

But with buzz about the arts district growing, Parrish says, the time is ripe for a new theater. "Whether the Westhampton ever closes or not, Richmond still doesn't get a lot of films other cities do," Parrish says. "The goal is to create a film theater responsive to the community ... to build around the best sense of what film can do, from raising awareness about community issues to just stimulating conversation around ideas." S

The Biograph's 40th anniversary double feature is Saturday, Feb. 11, at 7 p.m. at the VCU Grace Street Theater. Tickets are $20 ($10 for the films, and a $10 donation for the James River Film Society). Information at jamesriverfilm.com.