Goin' Back to Monterey 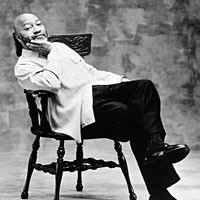 Calling a single band a jazz festival may be an overstatement, and there is something oxymoronic about taking an event so bound to an iconic location on tour, but who cares if it brings this caliber of musicians to Richmond?  The first Monterey Jazz Festival 50th Anniversary tour -- which played the Landmark Theater in 2007 -- was an economic and critical success, including a Grammy-nominated CD.  This year's model, with a similar first-rate lineup, has the advantage of performing at the far acoustically superior Carpenter Theatre at CenterStage.

While Barron's trio (with bassist Kiyoshi Kitagawa and drummer Jonathan Blake) is the foundation of the group, he is not the organizer.  “It's kind of an all-star situation,” he says, reached by phone. “We were all asked individually. Of course when I found out who was involved it was very difficult to say no.”

Born and raised in Philadelphia, the pianist came of age in that city's vibrant music scene, home of post-World War II greats including Dizzy Gillespie, John Coltrane and Clifford Brown. “In the '50s it was nice,” Barron says. “There were a lot of great players -- Sonny Fortune and Reggie Workman were the guys I grew up with, although they were a couple of years older.  There were a lot of clubs where young guys could work, and bigger clubs where the name players from New York would come. I heard a lot of music,” Barron says, “and played a lot, too.”  He's become something of an elder statesman of jazz without locking into a single style, fitting with chameleon-like melodic versatility into everything from hard bop to samba.  Over the past six decades he's released more than 40 recordings as a leader, and been a sideman on hundreds more. He's played with almost everyone in the Monterey band.

The exception is singer Kurt Elling, who just won the 2010 Grammy for best jazz vocal album. “I have tremendous love and respect for his genius and talent,” Barron says, “but this is the first time we've had the opportunity to work together.”

The group debuted at last September's Monterey Jazz Festival.  For the upcoming tour everyone is contributing original material as well as selecting some fitting standards.  “I know Kurt has some Wayne Shorter arrangements that he wants to do,” Barron says. “And he and Russell (Malone) did a duet at the festival that I hope they get to do on the tour.” (If this is like the last Monterey tour, the band will break up into various configurations over the course of the evening.)

It's a major commitment. The first leg of the tour, up and down the East Coast, lasts almost all of February, with a second, somewhat briefer West Coast circuit in April. A demanding schedule is nothing new to Barron, however, who taught at Rutgers from 1975-'99, retiring a full professor and today continues to teach part time at Julliard and the Manhattan School of Music.

And if the music he plays is sophisticated, his approach to performing is straightforward. “I don't know what makes people come out to a performance,” Barron says, “but what gets people to respond when you are playing is honesty. When the music is real, when they can see the players are really into enjoying what they are doing, then [the audience] will respond. They can see when it is just a job.”

For Barron, after a lifetime in music, each performance remains a fresh adventure.