Going to See a Movie About a Horse 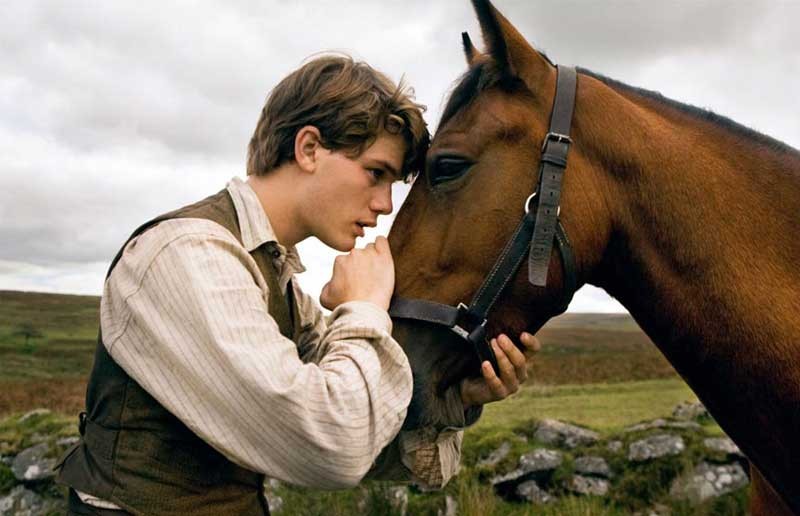 Steven Spielberg's "War Horse," cobbled together from a novel and a play, is approximately four horse movies rolled into one. That's the only potentially deal-breaking criticism you can level at this nice-looking and heart-tugging but lengthy journey that takes one handsome chestnut thoroughbred from Devon, England, all over World War I. Like the Forrest Gump of horses, it shows up at key moments throughout the war, bearing witness to scenes that illustrate a different horror, privation or sorrow. World war is bad, a moral lesson this horse learns quite well. If horses could learn morals. Oh well, we learn them.

The horse is born and bred in Devon to be sold at auction. To what kind of life it was intended we'll never know, because a drunken farmer (Peter Mullan) buys him, out of pride, instead of the draft horse he needs for the farm, which triggers a series of events that begins with the horse sold out from under the farmer's son, Albert (Jeremy Irvine) — who named the horse Joey — to an officer in the British army (Tom Hiddleston), who soon learns that cavalry fares poorly in modern combat against machine guns.

Joey's life, now with the Germans, becomes quite wretched, shuffling between owners who either want him worked or shot, with one brief respite on a picturesque farm with an adorable French girl (Celine Buckens) and her doting grandfather (Niels Arestrup). But at only 90 minutes in and with no last-minute saving gallops having been galloped, you know Joey won't remain there long. Without much adieu he's back with the pitiless Germans, pulling gargantuan cannons up steep hills. If you think those hills are dry and grassy and not slippery and sodden with rainy mud, you haven't seen a Hollywood weepy in a while.

It's important to note that there actually are two war horses involved in all this, not just one. Joey picks up a friend early along the way, a coal-black thoroughbred. The two bond and care about each other, so much that Joey actually runs to the front in one scene to take the weaker animal's place. Joey is extremely intuitive, not to mention gallant. The second horse serves as a kind of lesson for what could befall the first. The details will be spared if you haven't seen the film, but its fate isn't good. That we aren't intended to care as much about the second horse, or all the others being ground up in war, reveals a weakness of conventional, sentimental movies like this. Whenever Spielberg pulls the camera back to show the war's big, bloody picture, we might wonder: "Didn't something or someone love each of those dead and dying creatures down there? Why is this one so important?"

While Joey slogs through adversity at the terrifying Battle of the Somme, the film connives all around him to give his individual struggle meaning. It takes us from the German side over to the British trenches, where — you aren't going to believe this — Albert and his regiment are preparing to attack. This being a Spielberg movie, the war scenes are some of the best moments, at least from technical and visual standpoints. It's top-notch World War I re-creation, if relatively brief. The movie isn't, after all, about Albert and his comrades dodging bullets and rats, although Spielberg seems most at home here.

At this point we've only revealed a portion of Joey's long and nerve-wracking odyssey. All seems lost fairly frequently in this movie, so much so that it feels more like an action-adventure film trying to find its way home to a drama; a painful adventure, it must be noted, that never would have happened if Albert's drunken idiot of a father hadn't bought the horse in the first place. Spielberg's film is gorgeous. The horse is as appealing as a screen animal can be. Nearly every non-equine creature that handles it is just as beautiful. Personally, I wanted Joey to live out its days with the cute French girl, which indicates that the movie missed a step in making us care more about the human characters. Either way, we want the horse to make it in the end. All I can tell you is that there's a digitally painted sunset before the credits, and Joey earned every golden pixel. (PG-13) 146 min. S