Not much has changed at Azzurro. Not much needed to. 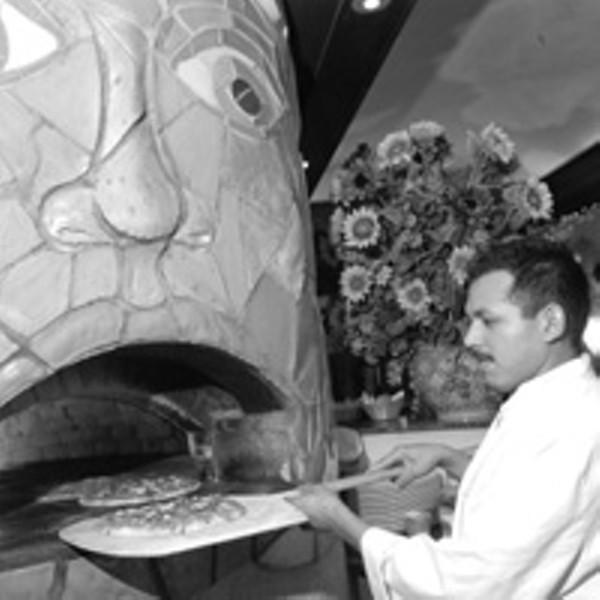 The menu is largely unchanged from the days when Marcello Sindoni, who still owns restaurants in Rome and Miami, made Azzurro one of Richmond's better Italian establishments. Sindoni attracted a loyal clientele of knowledgeable West End diners who appreciated his wide-ranging menu and wine list.

Both and Navarette's menu is divided into four sections—appetizers, pastas, entrees and pizza. The last ($10-$13) are prepared in a brick oven with a mosaic sunburst exterior. In addition to the usual choices, Azzurro tops its pies with eggplant, shiitake mushrooms, broccoli, zucchini, shrimp, salmon and goat cheese.

The pastas ($15-21) also include some out-of-the-ordinary offerings, such as the thin, tubular bucatini and orecchiette, or "little ears." The range of pasta reflects an attempt to offer noodles from the breadth of Italy, not only from the north and south, but from Sicily, where sauces combine cream, eggs, pancetta and Parmesan.

The popular tortellini is stuffed at dinner with pork and veal and mixed with prosciutto and green peas in a light porcini mushroom sauce. At lunch, the tortellini, filled only with veal, is served in a heavier Alfredo sauce. Both versions were satisfying, though the airy mushroom sauce did more to enhance the meat flavor.

Appetizers (about $10) include homemade mozzarella, fried calamari, a combination of mussels and clams, and portobello mushrooms, expertly grilled and topped with shaved Parmesan. Dinner entrees ($16-$28) are weighted toward meat and poultry. At lunch, a typical entrée is $11.

One of the changes Both made in the menu was to add additional variety to the veal dishes. Despite the elegant dining room décor, the veal scaloppini looks and tastes like a meal made in the kitchen of a loving Italian home. The thin, oval slices of meat are prepared in a white wine sauce with artichoke hearts and sautéed mushrooms. Veal also can be ordered with crabmeat, mushrooms or simply in butter and lemon juice.

Fish is not absent from Azzurro's menu, but comes only as a daily special, thus assuring that only the freshest seafood is served. At lunch, it is atop a salad of mixed greens. Two pieces of salmon, lightly crusted, were a bit overcooked for my taste, but not to the point of dissatisfaction. A risotto special also changes daily.

Desserts ($6-$7.50), several of which are made in-house, include that ethereal Italian treat, tiramisu, in which crispy ladyfingers are dipped in a mixture of espresso and sambuca, layered with mascarpone custard and topped with bittersweet chocolate.

The service at Azzurro was efficient without being intrusive. Our server readily returned a glass of musty Italian pinot grigio and replaced it with a pleasant California chardonnay.

Azzurro means "sky blue" in Italian, which is the color of the rounded ceiling that encompasses the narrow bar and small smoking area. When the main dining room in the back is crowded, as at lunch, it can be noisy. But at night, with its subdued lighting and tile-framed fireplace, the restaurant can be romantic — especially on these cool evenings.

Two ways to take off the chill are to start with a bowl of pasta figioli, thick with white beans and pasta, and to wind up with one of three varieties of grappa. Those who choose that powerful fermented grape, however, would be well advised to appoint a designated driver for the trip home. S