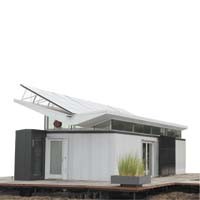 Seeking a glimpse of a potential future when the term "trailer park" appeals to more than the passing tornado?

Look no further than the parking lot of the Science Museum of Virginia, where a mobile home with a giant roof-mounted racing spoiler collects the best of green living under one very, very odd roof.

"The roof … among other things, the function is to trap rainwater for gray water recycling," explains David Hagan, a scientist at the museum who is as much a resident of the house as anybody in that he gives frequent tours of it -- though he's never slept there overnight. The washing machine, a small garden and other household systems use the residential wastewater from kitchen, laundry and showers.

Water's not the only thing that's trapped by this roof; its high northern exposure is mounted with 36 adjustable 200-watt solar panels that provide all of the house's electricity needs. Refrigerator, heat pump, stove, lights, computers — even a recharging station for a small electric car — have plenty of juice.

"And this house is selling power back to Dominion Virginia Power at a rate of about 70 cents per hour," Hagan says.

The house arrived at the Science Museum in January, still basking in its winning performance — it took a number of first-place awards — at the U.S. Department of Energy-sponsored 2005 Solar Decathlon event in Washington, D.C. Designed by the Virginia Tech Solar Decathlon team, it mixes form with function in an Ikea-meets-"Mr. Wizard's World" mash-up that's both eye-pleasing and food for thought.

There is, of course, a catch. This green dream home is likely to remain elusive for most consumers of average financial means. According to Hagan, the house would cost somewhere in the high $300,000s to build, and payback on investment would take years.

So for now, the only practical way to go green in your double-wide may be to keep diligently filling the recycling bins. But as for the future, dream on.