With Richmond's Hispanic and Latin American populations on the rise, art scenes grow in unexpected directions. 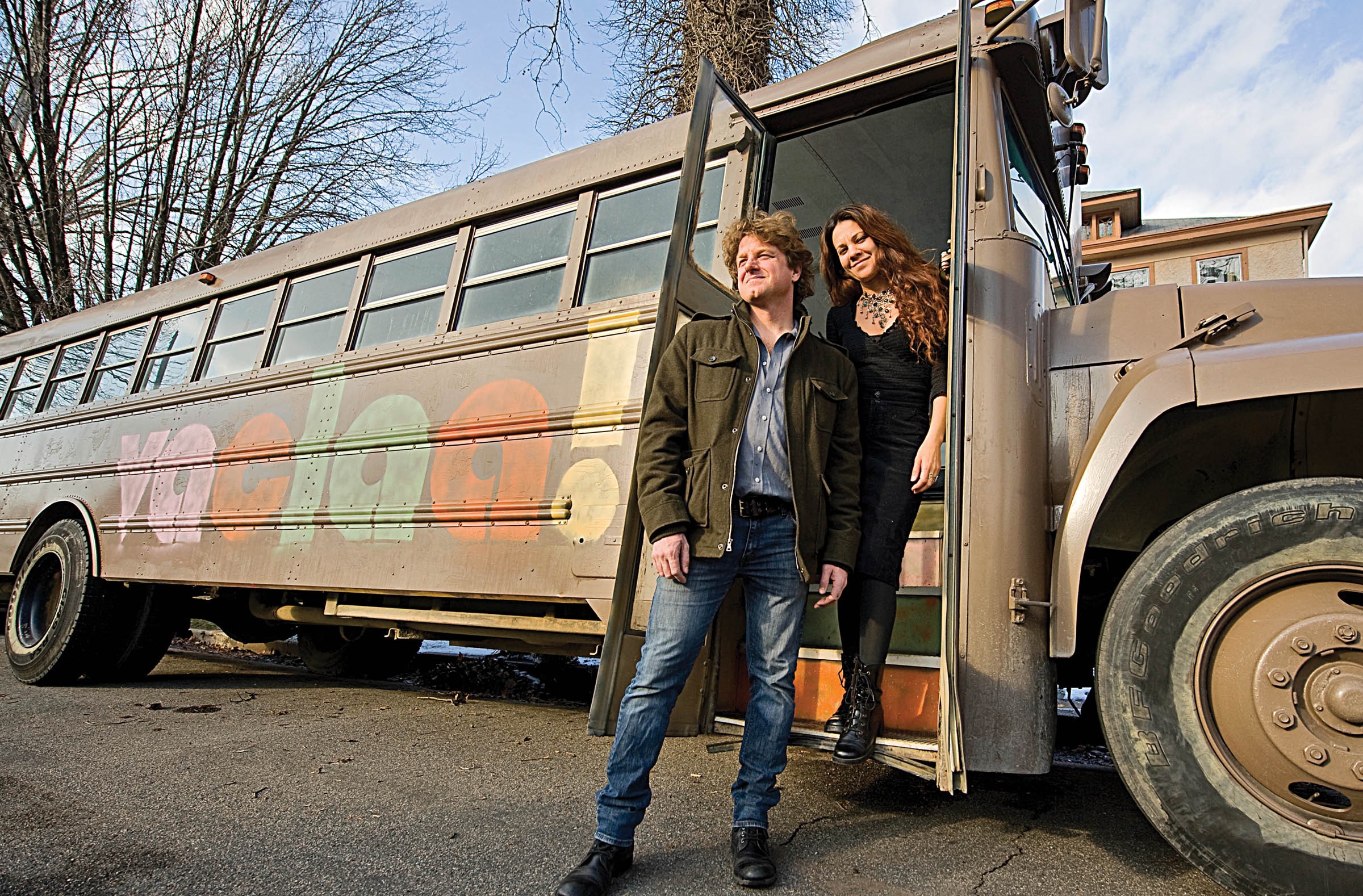 By day, 401 W. Broad St. is home to Moore's Auto Body and Paint Shop. But on every First Friday since April, the lot that's usually full of cars becomes home to a single mud-colored school bus. It's Galería Movimiento, a mobile art gallery paraded by the Virginia Center of Latin American Art (VACLAA).

Its co-directors, the husband-and-wife team Spencer Turner and Eva Rocha, painted the formerly yellow bus a greenish brown, adding the center's initials in salmon, orange, mint and canary on the side. The vehicle has seen countless hours of do-it-yourself tinkering by the couples' hands — even the rewiring of its lights to better illuminate the works on display. Rocha, a Brazilian immigrant, and Turner, a native Richmonder, are shedding light on cultural creations that in many ways have tiptoed in Richmond's shadows.

Yet Turner and Rocha are among a growing group of artists and activists seeking to bring more prominence to Richmond's Hispanic visual and literary arts. Since founding their nonprofit project last January, Turner and Rocha have attempted to introduce different Latino artists and curators to the Richmond public. One such artist, Sandra P. Cornejo, a Salvadorian-American Virginia Commonwealth University alumna, was the 2012 winner of the Evelia Gonzalez Port Latino Art in Virginia fellowship. Her original painting was the first to be added to a new collection of Virginia Hispanic work at the Library of Virginia.

It all began in October of 2011, when Rocha was working at the Virginia Museum of Fine Arts for the first Latin American family day and she began to hear stories from local Latin American artists and artisans discouraged by their lack of acceptance in local galleries. She and her husband promised to investigate and that's when the bus idea began to develop. She soon noticed many artists less afraid of hiding their Latin heritage, she says, numbers that have grown in the past two years — particularly at the second Latin American Family Day at the museum, which drew a huge crowd.

Now the center also holds lectures about social issues to complement current shows, offers art classes to low-income Hispanic children in the South Side, and works with other organizations, such as Safe Harbor Shelter, to provide art-therapy services to new immigrants adjusting to life in Richmond.

The center's next exhibition, "Forty-Five New Drawings and One Moving Picture," opens during First Friday on Feb. 1. The brainchild of Noberto Gomez Jr., the unusual show explores the connections between cannibalism and friendship, proving that not all of the center's shows are about Latin-American culture and Latino cultural identity. Gomez, a shock film enthusiast, says in a recent interview with the center: "I can only think there must be a relationship between cannibalism and friendship. There could be a mystical, spiritual idea about consuming a friend." His show will be the first mixed media installation on Galería Movimiento, presenting a different facet of Latino art to Richmond.

But VACLAA isn't the only place to see new work. The productions of the Latin Ballet of Virginia are more traditional examples of how many non-Hispanic Richmonders may perceive Hispanic art. Think passionate performances of salsa, mambo or cumbia, for starters. The ballet explains its work as using "the expressive beauty of movement to weave the tales and traditions that are the heart and soul of Hispanic culture." The company features 10 professional dancers, nine professional musicians and 25 student dancers. The company also runs more than 100 classes per week at two dance schools. Henley Street Theatre premiered its "Giving Voice/Dame Tu Voz" Hispanic arts festival at Centenary United Methodist Church in the fall. It featured the art of Helen Ruíz, English and Spanish interpretations of a classic Spanish play, storytelling and puppet-making workshops, poetry and fiction readings, dance workshops and a rendition of a play by Mexican writer Octavio Paz. James Ricks, artistic director at Henley Street, says the theater is likely to hold the event again this year. And larger institutions, such as the Virginia Museum, have seemed to pick up on the grass-roots efforts. The museum held its first Latin American Art Day in 2011.

As Richmond's Hispanic community continues to grow, such creative integration seems increasingly necessary. According to the U.S. Census Bureau, Hispanics may be the majority in the United States by 2050. More than 46,000 Hispanics live in the greater Richmond area, accounting for 6 percent of the city's overall population. The Richmond Public Schools has seen more than a 50-percent increase in the number of English-as-a-second-language pupils in the past eight years. Of the 1,000 or so students requiring those services, nearly 800 come from Spanish-speaking families.

One challenge these artists and community artists face is the language barrier. Not all of the parties involved speak or create in English. In other cases, they may not all speak Spanish. As the presence of the Richmond Brazilian Community Church attests, a fair number of Richmond's Latin Americans speak Portuguese. The Mixtecos, an Amer-Indian group from Mexico whose women's cooperative sells traditional embroidered napkins around town, speak an indigenous language.

With the highest poverty rate of any racial or ethnic demographic in Richmond, many Hispanics simply are trying to get by, and struggling against stereotyping doesn't help. Turner, of the VACLAA, cites some Americans' tendency to fear cultural differences and see Richmond as a place of black and white as another challenge. "Our role is to be a conduit so people in this area can normalize their relationship with Latinos," he says. S