"Rise of the Planet of the Apes" shows flashes of intelligence beneath its computer-generated sheen. 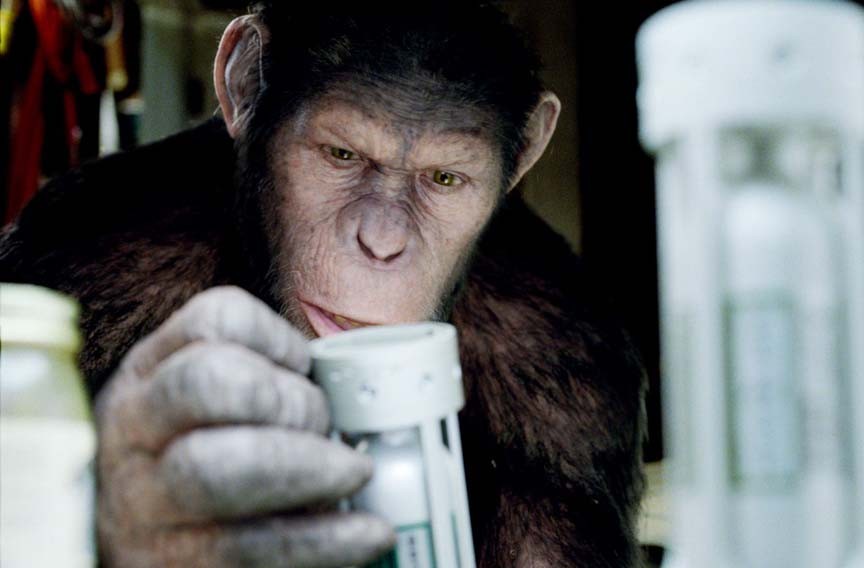 The first time you see the subjects in the new "Planet of the Apes" movie, a series reboot, they look real. The second time they don't. The difference is jarring.

The first time is in the jungle, where we see apes being captured. They're taken to a lab, where scientists are experimenting on them with an Alzheimer's drug. The camera zooms in on the face of one, a computer-generated chimp that comes across like a computer-generated chimp, essentially a cartoon escaped into a live-action film. That's how computer-generated beings look, especially close up, no matter how advanced the technology gets. The good news is that eventually you get over it. Getting over it requires suspension of disbelief, just like it did in the days of animatronics and makeup, and "Rise of the Planet of the Apes" makes it happen — a duty too often neglected by movies of this sort.

More than four decades ago the original did so as well, even with an overacting Charlton Heston and special effects that were only a little better than average. "Rise" is as advanced in comparison to "Planet of the Apes" as humans are to their simian ancestors, and yet it retains the essential DNA that made the original goofy premise so effective. It has a focused story and character development, resulting in emotional involvement and inevitable action set pieces that play an important role but aren't ends unto themselves.

It also has dual protagonists and stories. The movie follows Dr. Will Rodman (James Franco), and Caesar (Andy Serkis), the baby chimp he saved from his aborted Alzheimer's project. Caesar was weaned on a drug designed to repair and regenerate brain cells, but actually enhances the intelligence of apes, whose eyes turn a much more human green. Caesar grows up with Will and his father (John Lithgow) in secret, swinging around the house and gazing from its windows at the wider world outside. Increasingly he displays an unusual, almost human, intelligence.

It's not his intelligence but his animal side that proves Caesar's undoing, a neighborhood altercation sending him to an ape rehabilitation center where he learns grim realities about his station in life. These scenes are the heart of the film and the most interesting to watch. Caesar is smarter than the average ape — much smarter. But he doesn't know that right away, and only realizes it gradually. He even may be smarter than his human captors. We don't know, part of the movie's fascination.

What will Caesar do? What would we do if we were in his place? The answers are not always what you expect, which helps the movie not only avoid cliché but also establish the Caesar character as a truly new being on the planet — not man, not ape, but something independent, unpredictable. Visually he's never more than a digital creation (Serkis, unrecognizable and greatly enhanced, did a similar turn as Gollum in "The Lord of the Rings") but he's enthralling nonetheless.

Unfortunately the movie loses track of Caesar and Will when the apes rise. A battle ensues, putting the final 45 minutes through the paces of an action movie. The chaos feels earned, but the movie loses its insight and point. Another challenge is figuring out who the protagonist is — man or ape. Sometimes this uncertainty feels uncomfortable, like a glitch in the script, but it could be excused as a result of its cleverness. "Rise" isn't only a reboot, but a prequel that still seems to be unfolding while the end credits role. Who knows what will happen next?

"Rise of the Planet of the Apes" is frequently effective, but it's important to note it's not a complete story. Like recent Marvel Studios films and the "Harry Potter" series, this is merely one chapter in what its makers likely hope will be a long and fruitful series. It's also a stark contrast to the familiar human struggle of the original. Apes win, this time. What has Caesar learned? He wants freedom, which is understandable, but what of other virtues? It's odd to root for him and his kind. We know Ben Hur eventually will take them out, but all bets are off in the meantime. This is one instance when you can't wait for the sequel. (PG-13) 110 min. S

Rise of the Planet of the Apes