Some of Richmond's former Confederate monuments are headed west for a major exhibition. 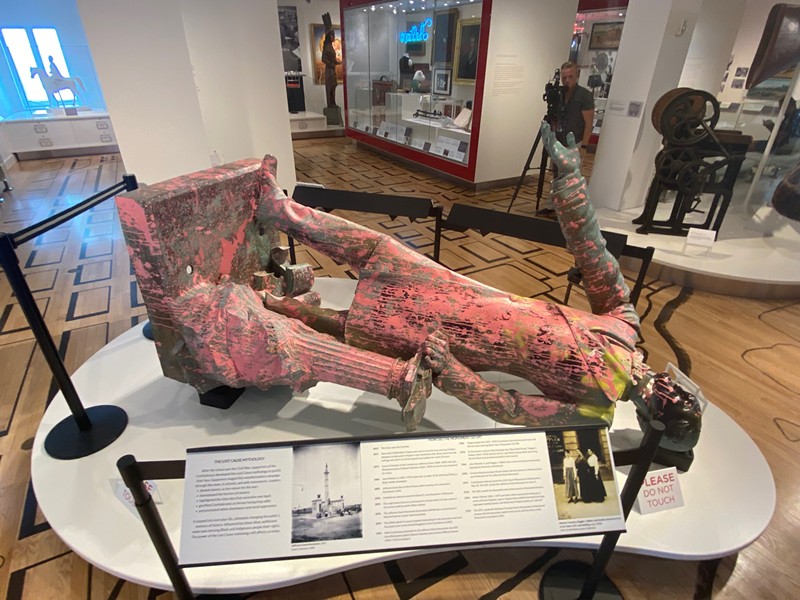 Scott Elmquist The Jefferson Davis statue will be removed from its new resting place at the Valentine (pictured) and sent to sunny Southern California to be part of a major exhibition, "Monuments."

Some of Richmond’s former Confederate statues will soon be on the march again, this time to sunny La La land.

Richmond’s removed Confederate statues now belong to the Black History Museum and Cultural Center of Virginia, which is currently negotiating, along with Bill Martin of The Valentine museum, for four or five statues to be placed on loan for the exhibition “Monuments,” co-organized by LAXART, a Los Angeles-based nonprofit arts organization, and the Museum of Contemporary Art Los Angeles (MOCA).

The exhibition, which opens in November 2023 at LAXART and The Geffen Contemporary at MOCA, is being curated by LAXART Director Hamza Walker, internationally renowned artist Kara Walker, and MOCA’s senior curator Bennett Simpson.

Martin tells Style that the list of statues they’re interested in includes Jefferson Davis (which he says is definitely going); the Vindicatrix (also known as Miss Confederacy); two urns from the Davis monument; the statue of Confederate cavalry general William Carter Wickham; the Joseph Bryan statue; and Matthew Fontaine Maury’s statue and globe.

“If we can use those statues in any way to continue to educate people and ultimately come to some kind of reconciliation around the whole concept of the Lost Cause, I think it's important that we do that.” --- Dr. Monroe Harris, chairman of the Black History Museum and Cultural Center of Virginia tweet this

While the Richmond statues will be on loan for the length of the exhibition, LAXART has directly purchased the Charlottesville statue of Thomas “Stonewall” Jackson for $50,000 as well. Attempts by Style to reach curator Walker in Los Angeles have yet to be returned.

The website for the exhibition notes that the Confederate monuments will be displayed alongside “existing and newly commissioned works of contemporary art” and will be accompanied by "a substantial scholarly publication and robust slate of public and educational programming." Support for the exhibition is being provided by the Mellon Foundation and additional seed funding was provided by the Emily Hall Tremaine Foundation, Teiger Foundation and the National Endowment for the Arts, as well as individual support by Margaret Morgan and Wesley Phoa.

Monroe Harris, chairman of the Black History Museum and Cultural Center of Virginia, says that the agreement is currently being figured out. He has no idea how much it will cost but says that the “astronomical expense” of moving them is falling entirely on the Los Angeles museums involved in the exhibition.

Harris spoke with LAXART curator Walker and told him they were happy to be involved in the exhibition. He tells Style that, considering everything that happened after the murder of George Floyd and the upheaval which occurred around the statues, he is happy to see the statues being put to better use.

“We’ve endured them for many years, when it finally came to a head to remove them, personally I thought that was the right thing to do,” Harris says. “If we can use those statues in any way to continue to educate people and ultimately come to some kind of reconciliation around the whole concept of the Lost Cause, I think it's important that we do that.”

Harris believes it’s important for the Black History Museum and the Valentine to engage in these kinds of collaborations with major institutions outside of Richmond, he says. “We are trying to be as collegial as possible with other institutions that have similar missions."

Also he points out that “if you’re not from here, in other areas of the country and even the world, those conversations have not been had,” while noting that the Black History Museum site has a current survey available to hear the voices of the community and what they think should be done with these historic artifacts.

Once the exhibition is over, the statues and artifacts will be packed up and sent back home to old Virginny. “I have no need to look into that expense at all,” Harris reiterates, laughing. “They’re going to be footing that cost.”

He also has bigger plans on the horizon. Harris adds that this year is the 40th anniversary of the Black History Museum and organizers are planning a big party and comprehensive exhibition next month in mid-September. He says it will feature artifacts they have collected over the museum's entire history.