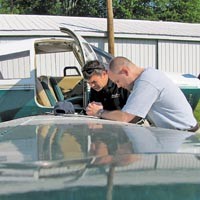 A flying nun would have done the trick, but Austin R. Nimocks is a Baptist. So when he needed to shower prayer from the air, he had to get an airplane.

If you were feeling an extra little slice of love May 6, Nimocks, a hobby airman, and his co-pilot, Phil McLanahan, may have been the reason. As part of the National Day of Prayer, the pair flew a Piper Cherokee single-engine plane over Washington and the State Capitol in Richmond.

“Part of the National Day of Prayer is that it's for all Americans to pray as they feel they should,” Nimocks says. “Pilots enjoy being in the air. It's a very American way to do it, to express it in your own way.” President Harry Truman officially recognized the day as a holiday in 1952.

Nimocks says he doesn't follow a regimented prayer cycle when asking for protection for the country, President Barack Obama, Congress, Gov. Bob McDonnell and the Virginia legislature. He and McLanahan try to pray together, a challenge because one of them must be in constant contact with air-traffic control.

They participated as part of the PrayerFlight Ministry, which launched its aerial prayer program in 2006. For the third year in a row, PrayerFlight pilots flew over all 50 state capitols.

The celebration this year was particularly victorious. Nimocks works as a senior legal counsel for the Alliance Defense Fund, a group dedicated to protecting people's right to religious freedom. In March his colleagues persuaded a federal judge to dismiss claims against the chairwoman of the National Day of Prayer Task Force, Shirley Dobson, wife of Focus on the Family founder James Dobson, in a lawsuit charging that government-issued proclamations encouraging people to pray are unconstitutional.

When he's not working, or flying, Nimocks occasionally writes columns for the conservative news and opinion outlet, Townhall.com. So how did it feel to pray for Obama?