The spirit-filled marching band at the United House of Prayer in Church Hill. 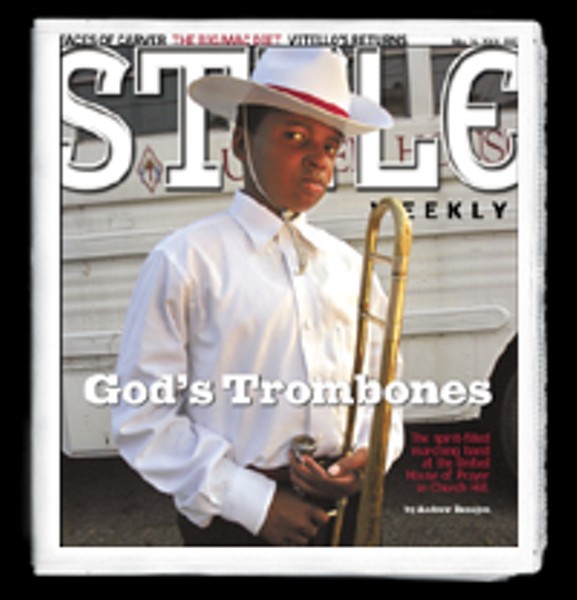 “Deacon Tony, turn on the air!”

The red-and-white school bus is rattling down 31st Street on a surface-of-Mars-hot Saturday afternoon, its seats filled with chattering teenagers, three clanking sousaphones and, apparently, one overheated wiseguy.

Tony Davis feigns hitting a switch before opening the window next to him instead. “That better?” he shouts back, laughing. A moment before, it didn't seem likely that the bus would ever pull out from the United House of Prayer for All People on Chimborazo Boulevard. Every time it seemed set to leave, another kid would appear, clutching a battered trombone case or wrestling a cooler.

It's only a five-minute drive to Armstrong High School from the House of Prayer.

But the trip has become necessary since a neighbor complained about the church's marching band practicing in the church's parking lot (and, when the spirit descended, marching through the neighborhood).

So now, every Saturday, the band piles in the bus that Tony Davis normally uses to shuttle carless parishioners to services and heads to a more amenable practice space.

Oh, incidentally, you read that right. The church has a marching band — the Madison Lions. And it's heading to D.C. Memorial Day weekend to blast praise in the streets.

The denomination was founded in Massachusetts in 1919 by Charles Manuel Grace, a Portuguese-speaking immigrant from the Cape Verde islands. “Sweet Daddy” Grace founded the first House of Prayer in West Wareham, Mass., but the sect really took root in the Southeast, where Grace led revival meetings noted for such volume and enthusiasm that they made Pentecostal services look like tax-law seminars.

Grace traveled with a trombone player named George Williams, and the two made a point of collecting discarded instruments whenever possible. “Our founder loved parades,” Taylor says. “He would literally march through the streets of the cities where the Houses of Prayer were.” It was a good way to draw attention in the spiritual marketplace of early 20th-century America — not that Grace, who called himself the “boyfriend of the world,” sported flowing locks and robes and had a habit of baptizing converts with a fire hose, especially needed help in that department.

Today the United House of Prayer boasts about 3.5 million congregants. And nearly all Houses of Prayer have shout bands. Typically, shout bands have 15 to 20 members playing brass instruments accompanied by drums. Trombones take the lead in shout bands, probably because, like steel guitars in Floridian Pentecostal churches, they can bend notes to mimic voices.

“If I sing a song on the rostrum, they'll play it as I sing,” Taylor says of his church's group. The improvisational aspect of shout-band music gives way to regiment quickly, though: Once the lead trombonist settles on a “recitive” theme, the other musicians begin to play chordal harmonies, building what's called the “aria” section, and the whole shebozzle ends with the “shout,” a wall-shaking reprise.

Taylor is a young 38, disarmingly handsome with a voice that could melt diamonds. He moved to Richmond 12 years ago from his native Charlotte, N.C., a region Bishop Grace found particularly fertile, and which is now home of several nationally known shout bands such as Clouds of Heaven.

Taylor doesn't take his church's music for granted — he's a fan who'll reverently list shout-band innovators like Butch Littlejohn, George Holland and Eddie Babb, and pick through a pile of dubbed CDs with handwritten labels to play just the right track for a visitor (if you're curious, Smithsonian Folkways has a compilation of a few better-known shout bands called “Saints' Paradise”).

“You almost have to experience the band in a service,” Taylor says. “Unfortunately, in the past month we've had four funerals, and the band is part of every service that we do. And that's a lot of times the first experience that people have of a shout band. It's kind of odd because I get to see the faces. By the time they leave, they're like, ‘Oh, that was nice.' I don't think they mean to say the funeral was nice, but — we try to make it a celebration.”

We're sitting in the sanctuary of the church, which was renovated in 1995 and is clean and well-maintained. The band instruments in front of us are a different story — let's just say they've developed some personality over the years.

“Every member of this band is responsible for purchasing their own instrument,” Taylor says. “I'm always begging for instruments. I'm sure if we had the chance to say to people that got some old trombones in their closets that are gathering dust, they'd probably be very proud to know how well they'd be used.”

At Taylor's suggestion, Davis assembles most of the shout band from the youngsters waiting to go to get on the bus for marching band practice (all 18 or so shout-band members also are in the bigger group). The 13 or so guys appear to be in their teens or 20s and roll into the church wearing casual clothes.

“Steve, roll down that pants leg — we don't do that in here,” Taylor chides Steve Sutton Jr. in a friendly but firm tone. “They're gonna be taking some pictures, so we need to make sure everything's cool. Let's see … that towel on your shoulder's not cool, that rag on the floor's not cool — what else isn't cool?”

“Steve!” a bunch of guys shout.

“Steve, move out of the picture altogether,” Taylor teases.

Just as the band finishes warming up, Nathanial Page bounds in. Taylor tells him they're getting ready to start, but Page heads off to pray first. Quiet and self-effacing, Page is the leader of the shout band, a one-time Hampton University music major who arranges all the group's tunes without ever writing a note on the staff. The abbreviated brass section — eight trombones, one baritone and a sousaphone — is seated around a bass drummer, a snare drummer and a kid playing cymbals as the first trombonist starts calling a theme in Page's stead (Page will egolessly rejoin the band in a lower chair a few minutes later).

The band follows languidly, going into a slow, Dixielandish groove, which becomes more aggressive, repeating like a Neptunes beat. The players start swaying, and the music starts to crest. It's already way louder than most rock concerts, with the various horns playing choirlike harmonies, and then, on Tony Davis' signal, the fellows stand up. The kid playing cymbals moves to the front, still keeping the backbeat. Maybe it's the air conditioning, but wind seems to come off the trombones.

The baritone player signals, and suddenly the band breaks the song back down to just the groove, with the drums dropping out. And then they're back for the “shout,” one player improvising a sweaty, raspy solo, the band even louder than before. When Davis signals the end, it feels like a lot more than 10 minutes have just elapsed.

“Big circle!” Tony Davis calls out, after making the marching band members run two laps on Armstrong's track (a kid who threw his empty soda bottle out the window on the way over is sentenced to two extra circuits).

Everyone joins hands. Nathanial Page offers a prayer, thanking God for a day to practice and asking him to “bless our instruments, bless our sticks, bless our hearts and mouths.”

With their weather-beaten instruments — like an improvised sousaphone neck more electrical tape than brass — and Rocawear, these kids hardly look like a marching band. Taylor says they've got uniforms on order, but they won't come in time for the informal competition on Memorial Day weekend in Washington. The Madison Lions Community Marching Band, named for the United House of Prayer's bishop, S.C. Madison, will board their chartered bus and march around Logan Circle in blue khakis and white oxfords.

“We really want to grow,” Taylor says, standing in the infield as the band assembles on the track. “But you can only grow as big as you've got supplies to do.”

“U-H-O-P!” they respond, and the rhythm section sets the pace. The Lions begin circling the field, playing almost Stevie Wonderish melodies in places, striking beautiful harmonies and stirring beats. And suddenly all the incongruities vanish — this poverty-stricken neighborhood, these scruffy instruments, the calf-high weeds. This is a great band. And if they don't turn everyone's heads on Memorial Day, the competition will have been sent directly from heaven. S