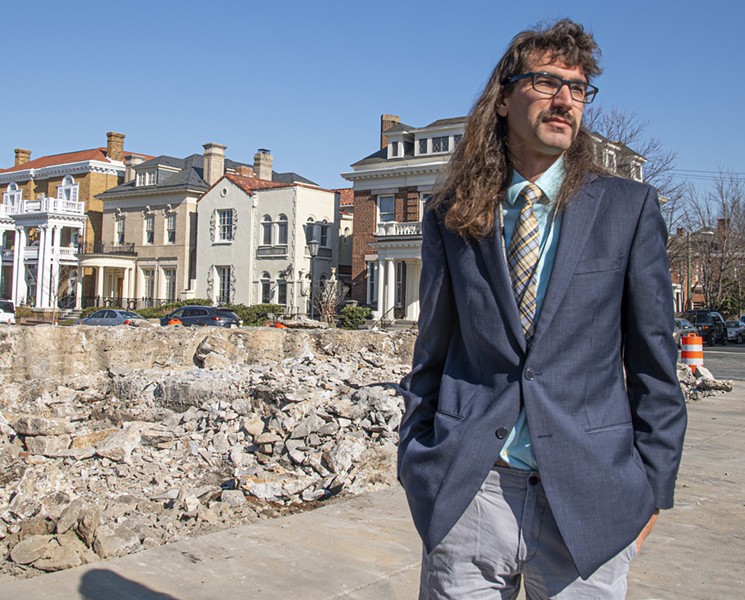 Gatsby is what you would call a citizen journalist who delivers his work straight and unfiltered to the people via social media. You can count on him being in the thick of Richmond area protests – though these days, it’s mostly as an eyewitness observer.

Having moved here to attend VCU in 2004, Gatsby got into activism by protesting the Confederate Flaggers in his Fan neighborhood in 2014. That soon led him to the infamous Unite the Right rally in Charlottesville, where he says he was physically attacked by white supremacists. He pressed charges against them, only to be sued by Christopher Cantwell, also known as “the Crying Nazi.”

“In the 20-teens, it was very important to confront things and by 2020, I felt like I had gotten much older and it was more my job to shine a spotlight and follow things using Twitter as the medium,” he explains, noting that he did not partake in the 2020 protests in Richmond, but observed them as a watchdog on police brutality. Lately, he’s been at the statehouse following lawmakers, he says. You can recognize him by a button he usually wears that reads “Commie Bitch.”

Gatsby recognizes that in-person journalism is decreasing and he feels it’s important to be inside committee rooms to see what’s going on outside of the view of cameras live-streaming. While many citizen journalists publish on Substack behind a paywall, Gatsby says he wants to keep his content free and accessible. He also hosts a WRIR 97.3 radio show, “Richmond Cryptoids” on Thursdays at 1 a.m., a program which explores topics from local urban folklore, such as the Richmond vampire, to real political events like the 2012 abortion protests at the Capitol.

In terms of looming problems, Gatsby points to disaster capitalism and how it privatizes things such as schools: “I feel like that’s going to be Youngkin for the next four years, taking advantage of disasters and privatizing them,” he says.

Fundamentally, Gatsby says he’s trying to get people to think outside of the box. He’s also still involved with infiltrating right wing groups, he says, and is even floating around the idea of "weaponizing" the activity of rollerskating.

“Combining the arts and politics isn’t that difficult."