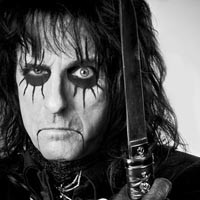 Watching '70s shock rocker Alice Cooper bring down a packed National on a Tuesday night was a little like getting a heavy metal history lesson. The raw DNA for future acts from Marilyn Manson and Motley CrA¬e to our own local shock humorists, Gwar, was very much present.

But by the end of the night, there was no question: Alice went down that hole first and remains a first-class purveyor of American rock madness.

For an hour and 45 minutes, Cooper put on a highly theatrical, special effects-ridden show of greatest hits and a few buried nuggets -- such as “Guilty” from 1976's “Alice Goes to Hell” -- that were full of arena-sized flare and vaudeville-styled black humor for the crowd of mostly older, diehard fans.

The striking stage set-up for this “Theatre of Death” tour featured a huge backdrop of Cooper's original Goth visage hung above gigantic red letters spelling out “Alice” which the band performed on and around. Instead of lighters, the entranced crowd held up personal phones, creating a sea of tiny video screens. One crowd member in front held up a naked baby doll skewered on a stick—arguably more shocking than any of Cooper's goofy antics that would follow.

There was the goose-stepping, the twirling cane, the smoke, leather, outrageous shiny and studded outfits, as well as rotating set pieces from a ragged bride doll to fake gallows and a guillotine—the latter of which humorously malfunctioned when the blade didn't completely drop. But it didn't matter. The musical performances were flawless and the song selection was mercifully devoid of his most saccharine ballads. This was a veteran showman throwing every trick in the book at the audience.

Cooper, a 61-year-old Detroit native whose real name is Vincent Furnier, puts an insane amount of work into his expertly paced show, with numerous costume changes and off-stage characters waltzing into every song. The singer was in fine form, belting out his classic songs filled with teen fantasias of death, fast cars and faster women. He had himself repeatedly killed or placed in straightjackets throughout a night that started and ended with crowd-rocking versions of his classic anthem, “School's Out.”

Other favorites would follow: from the FM rock staple, “I'm Eighteen,” also played early, to a heavily scripted version of “Welcome to my Nightmare” (complete with bride-doll thrashing) to the latter day hit, “Poison,” with crowd-favorites “No More Mr. Nice Guy” and “Under My Wheels” coming toward the end.

His band was also impressive, laying down a fine-tuned thrum of solid metal and never missing a note. With heavy-hitting drummer Jimmy DeGrasso perched high above the stage floor, guitarists Keri Kelli and Damon Johnson entertained the crowd while shredding on their instruments, and bassist Chuck Garris wore himself out head-bobbing to his manic playing. But make no mistake, Cooper was clearly the star of the show, commanding the stage and keeping the audience involved by tossing out necklaces, canes, or fake money at them during a stellar rendition of “Billion Dollar Babies”—all while acting out freakish characters with a smirk and a grin.

Even if you weren't a huge metal fan, you had to be impressed. Cooper has long since exorcised his own substance abuse issues and is now a born-again Christian, while his current tour proves that his performance instincts are still peaking. This was a highly entertaining, over-the-top arena rock show from start to finish.