Jodie Foster’s “The Beaver” is all worked up over depression. 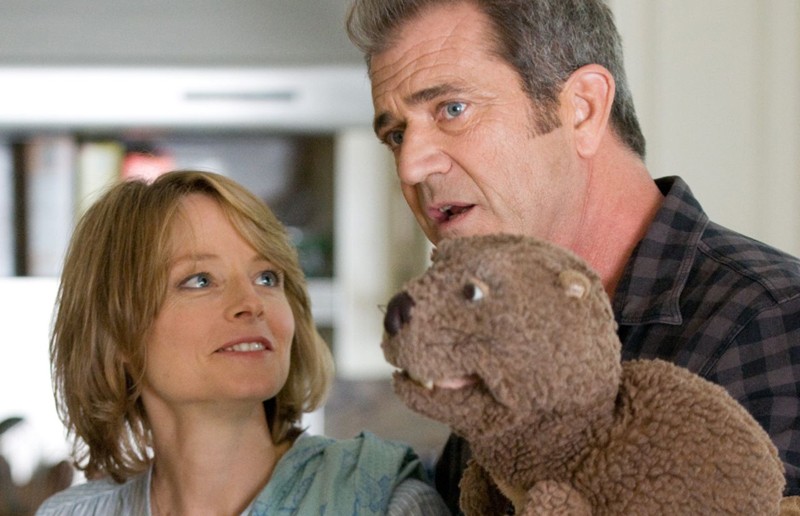 The image of a broken man standing on the railing of a hotel balcony with a shower curtain rod tied to his neck and a beaver puppet on his hand should say it all.

But not to Jodie Foster, who directs Mel Gibson as a depressed slob who wants to end his life in “The Beaver.” She precedes this scene with about 15 minutes of voice-over-filled montage, which explains, like setting up a fable for children, how Walter Black (Gibson) is so depressed that he’s alienated his family, brought his company to near ruin, and decided to give up. Except that “The Beaver” isn’t a fable, or, more surprisingly, much of an investigation of depression. It’s trying to fit somewhere in the middle, one supposes, but, like its main character, it’s too fuzzy and confused to be sure.

When Walter wakes up he’s talking to himself with the help of his hand puppet, imbuing it with a British accent that recalls Michael Caine. He names it the Beaver — or it names itself, a question central to the movie’s plot. Is Walter acting out as the Beaver or is the Beaver taking over his life? To put it more simply, is he getting better or crazier?

The question becomes difficult as Walter moves back home and tries to repair his relationship, succeeding with his youngest son, Henry (Riley Thomas Stewart), his wife, Meredith (Foster), and the employees at his business, a failing toy company he inherited from his father sometime in the past. The only person not buying Walter’s transformation is his eldest boy, Porter (Anton Yelchin), a bright high-school senior who writes other students’ papers for money.

That voice-over introduction aside, the earliest parts of “The Beaver” are promising, with refreshingly unpredictable elements at odds with the movie’s more formulaic latter half. One particularly fine example is Walter’s reappearance at home with the Beaver, which makes Meredith cautiously optimistic but delights little Henry, who loves having his father back in this cheerful and fun new persona. Gibson’s performance is brave and forceful. Walter regales the small boy, often bullied at school, with a tale of constructing an ugly but winning soapbox racer when dad was his age. He named it “the turd,” he tells his son, finishing his story with the promise, “You say the word, we’ll make the turd.” At this point “The Beaver” had me in its strange but compelling grip.

Unfortunately it didn’t last. The movie’s main problem is Foster, so good in so many past films but unable to convince here either as director or performer. If we get one thing from her movie, written by Kyle Killen, it’s that she’s perfected that signature purse-lipped, one-eyed squint of hers meant to convey concern, and isn’t afraid to lean on it. The reliance on that look suggests that Foster the director is as uncertain as any character in her movie.

It isn’t long before “The Beaver” lurches back into the familiar and lazy. In one tellingly hackneyed development, Walter turns his company around with a speech and a montage sequence in which he invents a best-selling toy (a beaver toy of course) that unleashes him on the talk-show circuit. It all happens so quickly and conveniently. Making the toy a failure might have allowed Gibson’s character and the story to go in more interesting directions.

Similarly, Walter’s son Porter is saddled with the kinds of predictable coming-of-age issues we’ve seen in countless other films, including a romance with the pretty class valedictorian (Jennifer Lawrence from “Winter’s Bone”) which leads to many confrontations between all the characters. A lot of fuss is made, but it barely diverts our attention from the movie’s dire lack of point.

Foster has blamed audiences for her film’s poor reception. It’s a dramedy, she reportedly explained, “And very often Americans are not comfortable with [that].” You can’t fault her for deflecting criticism, but such sentiments feel disingenuous. It’d be easy to name several similar American classics from recent memory that “The Beaver” is attempting to imitate in some way. It’s possible that audiences simply know a misfire when they see one.

Maybe Foster’s the one who isn’t comfortable with the genre. She might not be able to help her star’s self-destructive tendencies, but she could have tried to turn her movie’s conventions and clichés on their heads. Instead, “The Beaver” feels a lot like her performance, tentative and unconvincing. (PG-13) 90 min.