A new history of Arthur Ashe explores the complexities of a Richmond legend. 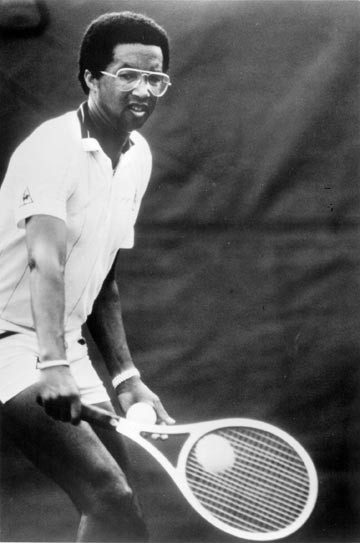 In traditional tennis whites contrasting against his dark skin stands a lean, intense, Richmond-born athlete at the net clutching a tennis racket. The headline reads: "He topped the tennis world. The Icy Elegance of Arthur Ashe."

Ashe was all that and more. He spent his childhood hitting the ball about segregated Brook Field Park in Richmond's North Side and endured decades of racism at home and abroad. By 1968, he was using his vicious backhand and killer serve — 26 aces in one match — to become the first black player to win the U.S. Open. It was just one rung on a marvelous tennis career in a sport that had been almost completely closed to members of his race.

Ashe was anything but conventional. His father, Arthur Sr., was a strict disciplinarian who taught him courtesy and responsibility. As a gentlemanly young player in the 1950s, he quietly endured insults from the likes of the Country Club of Virginia, where he was unwelcome to play in city tournaments. He ended up working the all-black American Tennis Association circuit before finally escaping Richmond's racism to St. Louis and then the University of California at Los Angeles, where he emerged as a top U.S. Davis Cup team member.

Along the way, he slowly developed a sense of social justice that burned in him until his death in 1993 from AIDS, which he acquired in a blood transfusion during heart surgery. Ashe's rise as an activist against racism is well documented in Eric Allen Hall's new book, "Arthur Ashe: Tennis and Justice in the Civil Rights Era," (Johns Hopkins University Press). It should be of special interest locally, with Ashe's statue standing in marked contrast just down Monument Avenue from the Confederate generals.

A professor at Georgia Southern University, Hall notes that Ashe's fight against racism was enormously complicated by his personal background, conservative mores and a society that was changing faster than he could keep up.

In fact, Ashe was slow to embrace the cause. By the time he did, he confronted far more radical African-American activists who dismissed him as a goody-goody, youthful version of Uncle Tom. His service as an Army officer during the highly controversial Vietnam War also hit sour notes. Patriotic Ashe was proud to be in the Army, although his tennis prowess conveniently kept him out of combat. He did, however, play in an exhibition match in Saigon when he wasn't teaching at West Point.

An even more striking revelation is that while Ashe played a huge role in the successful global campaign against South Africa's apartheid policies, he was as big a sexist as you could find. By the late 1960s, when Ashe was in his tennis prime, rising female stars such as Billie Jean King were pushing the ceiling that held them down. Victorious women players got roughly one-twelfth the prize money that men received. Ashe said it was perfectly fair because women players were "boring." In response, King retorted that she was "blacker" than Ashe was.

Indeed, Ashe's iconoclastic nature traces back to his Richmond roots in the 1950s. His dad taught him to maintain his dignity in the face of insults and adversity. At one point, Ashe Sr. was a personal driver for William Thalhimer, a prominent local businessman and real estate developer who happened to be Jewish.

One day in the 1950s, Thalhimer had Arthur Sr. drive just outside of the city to dicker over some property. The seller pounded Thalhimer with anti-Semitic insults that Thalhimer quietly ignored while whittling down the price. When Ashe Sr. later asked him how he could put up with it, Thalhimer responded: "I came out here to buy that land and the end result is that I got the land. It's mine now. He can curse me all he likes."

The lessons were passed on to Ashe Jr., who became a recluse after losing his mother at an early age. He read a lot, which bespeaks his nerdy, black plastic eyeglasses that became his trademark. When his tennis star started to rise, national sports journalists were surprised to see him reading "Ulysses" and "Human Sexual Response" instead of "Playboy," which they'd expected.

His intellectual bearing and string-bean appearance didn't fit with other black sports activists of the day such as Jim Brown of the NFL. Ashe put up with the putdowns by fellow black athletes. It helped him later with white ones. By the 1970s, the tennis world had become filled with immature brats such as John McEnroe, Jimmy Connors and Ilie Nastase. Ashe frowned on their antics, but maintained close friendships with them.

Ashe reached his high point around 1975 when he won Wimbledon and became the world's No. 1-ranked tennis player. But his biggest victory was beating back the white-ruled South African government into granting him visas to play in that country.

In general, Hall does a good job of compiling facts, especially the convoluted story about breaking down racial barriers in South Africa. But he does make a few sloppy factual mistakes, saying for instance that that Jacksonville, N.C., is next door to Parris Island Marine Depot when it is Camp Lejeune. He also says Prince Edward County is right outside of Washington when it's a ride of at least three hours.

Ashe's career eventually declined, but not his passion for social justice. When he died Feb. 9, 1993, L. Douglas Wilder, the state's first black governor, ordered state flags to fly at half mast. One black man was quoted saying at his funeral: "I owe him at least this. He showed me it's OK to aspire. It's OK to be articulate. I never had an older brother. Instead, I had a hero." S

Style Contributing Editor Peter Galuszka plays tennis competitively in the Richmond area and is rated at the next to lowest level possible.