Giving Up The Ghost

Firehouse Theatre’s “Ghost Quartet” is “a song cycle about love, death and whiskey.” 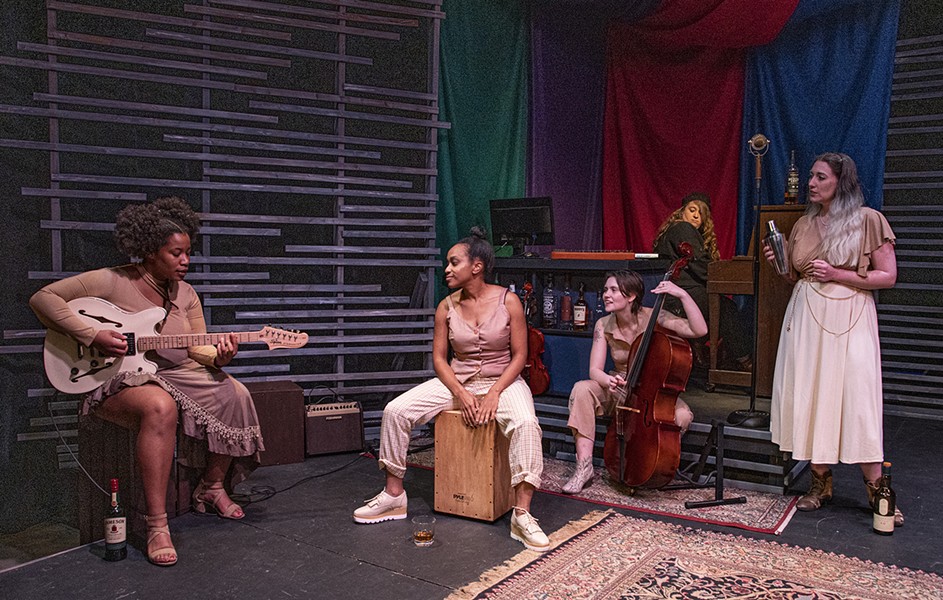 Scott Elmquist The cast of "Ghost Quartet," a musical by Dave Malloy which has its Mid-Atlantic premiere on Thursday, Jan. 19 at the Firehouse Theatre.

Getting hit by a train. Being mauled by a bear. Getting all of the stardust sucked out of your body. In the musical “Ghost Quartet,” there are just so many ways to die.

“I actually really like the stardust, because it’s sort of a subtle death,” says Valerie Chinn, who plays the character Pearl in the production opening this week at the Firehouse Theatre. In the show, Pearl dies at least six times.

“It is about four souls who constantly revolve around each other through many generations and many lifetimes,” says Chinn of the musical. “These four souls have once again found each other and have come together to drink whiskey and remember what they mean to each other.”

In “Natasha, Pierre, and the Great Comet of 1812,” composer, playwright and lyricist Dave Malloy adapted part of “War and Peace” into a pop opera. With “Preludes,” he entered the hypnotized mind of Sergei Rachmaninoff.

And with “Ghost Quartet” Malloy takes audiences into “a song cycle about love, death and whiskey.” Spanning seven centuries, the musical weaves together fairy tales, modern New York City, Scheherazade and Edgar Allan Poe’s “The Fall of the House of Usher” into a wholly original work that includes jazz, folk, electropop, doo-wop, gospel and honky tonk among its musical stylings.

“They’re all interesting and experimental pieces to some degree,” says “Ghost Quartet” director PJ Freebourn of Malloy’s oeuvre. “They stretch the boundaries of what theater normally does. This piece does so in its very composition. It’s a series of stories that are all interconnected that are told in a nonlinear fashion.”

The piece premiered in 2014 at the Bushwick Starr in Brooklyn with Malloy as a member of the four-person cast. Originally written for two men and two women, the show has been reworked musically at the Firehouse for an all-female cast with Malloy’s blessing.

“It’s almost nothing like the original piece,” says Freebourn, who starred as Rach in the Firehouse’s 2018 production of “Preludes.”

Instead of the usual month or month-and-half of rehearsing that’s standard for local shows, this production began meeting the better part of a year ago so that cast members could immerse themselves in their parts and incorporate their own talents – including tap dancing and playing the ukulele – into the show.

Of her role, Chinn says Pearl dies in almost all of her storylines.

“Pearl takes many different incarnations. Sometimes she’s not called Pearl. Sometimes she is different generations of the same family line,” Chinn says. “In every incarnation, she is the ultimate giver. Everything she does, she gives of herself to the point where it hurts. She gives and gives until it wastes her away.”

She adds that audiences should anticipate being involved in the proceedings.

“Don’t come in expecting a regular proscenium show,” Chinn says. “In most cases, theater is voyeuristic. That is the purpose of it. ‘Ghost Quartet’ is not really that. If you’re coming into the show, you are coming in to be a part of it. We’re not pulling audience members up on stage or anything, but the environment is something that is all inclusive.”

Through the course of the show, themes of love, family, hope and memory are touched on.

Freebourn stresses that the experience of “Ghost Quartet” is unlike any other show.

“It’s an innovative and immersive theater experience I don’t think you’re going to see elsewhere,” Freebourn says. “It’s something new and something exciting that really takes you on a journey that’s both surreal and deeply emotional.”

Editor's note: Firehouse Theatre's website states that "as community transmission levels are on the rise in Richmond, we're requiring ALL audience members to bring and wear a face mask while in Firehouse."