Giving Sanctuary: What We Know About Richmond’s Role in the Immigration Debate 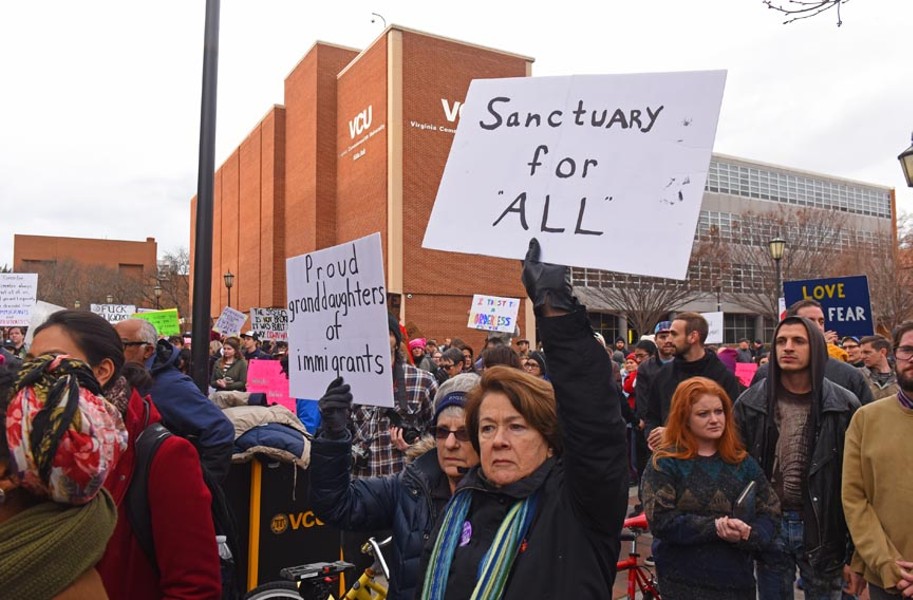 Scott Elmquist A rally at Virginia Commonwealth University on Jan. 29 drew more than 500 people who expressed support for refugees and immigrants.

President Donald Trump’s executive orders on immigration have dominated the news, and Richmond jumped in the fray last week.

While the city is far from the Mexican border and its international airport fields few international arrivals, questions were raised about how an order about “sanctuary jurisdictions” would affect Richmond.

The term’s definition varies and, until recently, it seemed a self-designation. But some legislation is starting to clarify what it entails. Here‘s what we know:

• Trump’s order prohibits federal dollars from going to what it calls sanctuary jurisdictions.

• Richmond receives millions of dollars annually from Washington for things as varied as housing, education, transportation and social services. The bus rapid transit project, for example, is made possible by a $25 million federal grant.

• Trump’s order defines affected jurisdictions as ones that refuse to comply with a 1996 law that says local governments may not prohibit or restrict the flow of information about citizenship status to federal immigration officers.

• The order says the secretary of homeland security “has the authority to designate, in his discretion and to the extent consistent with law, a jurisdiction as a sanctuary jurisdiction.”

• Mayor Levar Stoney did not designate Richmond a sanctuary city, but signed a directive on Monday affirming city ”policies of inclusion.”

• Richmond Police Chief Alfred Durham has said that it isn’t department policy to ask about immigration status of people it encounters as part of community policing.

• Federal and Virginia state law requires officials to alert federal authorities when an undocumented person is booked into jail, which is the jurisdiction of the sheriff’s office. The Immigration and Customs Enforcement, or ICE, issues detainee requests for some. Then it picks up some — but not all — of those it has requested within the alloted time.

• Demonstrators held two rallies last week in support of immigrants and refugees, and against executive orders that promote a Mexican-American border wall and prohibit travelers from certain countries.

• The Jan. 30 rally outside the federal courthouse on Broad Street, organized by a group called ICE Out of RVA, seeks to stop police, schools and government officials in Richmond from cooperating with the agency. Some speakers questioned the police chief’s assertion that immigration status isn’t brought up during routine policing.

• A bill moved to the Virginia Senate last week defining a sanctuary city as “any locality that adopts any ordinance, procedure, or policy that restricts the enforcement of federal immigration laws to less than the full extent permitted by federal law.”

• Sen. Jennifer McClellan suggested during debate that the Police Department’s policy of not asking citizenship status might qualify Richmond as a sanctuary city under the proposed law.

• The bill seeks to open up any such city to be sued by someone who is injured by or has property damaged by an undocumented immigrant within city limits.

• It passed out of committee on a party line vote. Sen. Glen Sturtevant voted for it. McClellan voted against it.

• Another bill in the Virginia House of Delegates prohibits the adoption of any sanctuary-style ordinances, procedures or policies.

• The ICE Out of RVA group was organizing to attend the City Council meeting Feb. 13 to rally in support of sanctuary designation. S