MOVIE REVIEW: “Dawn of the Planet of the Apes” swings into theaters from a different point of view. 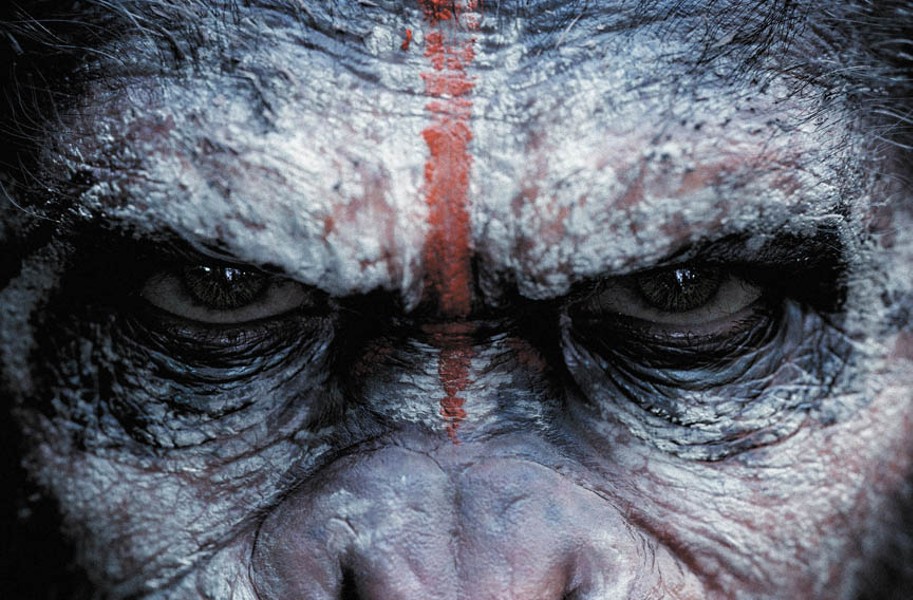 Chimp pimp Caesar, played by Andy Serkis, just wants to chill in the Redwoods but mankind has other plans in the latest reboot of the “Planet of the Apes” franchise.

Dawn of the Planet of the Apes" begins, after a prelude, with a fake-news montage bringing us up to speed. You know the drill: snippets of real-world leaders talking about real-life events, stitched together to tell of a fictional catastrophe.

The device has become such a cliché by now that it's a disappointment to find it in a story that, surprisingly and admirably, tries to pay much of its attention to its nonhuman characters, a group of apes trying to eke out a living a decade later in the forest outside San Francisco.

The band is led by Caesar (Andy Serkis), the super chimp who reigns over the apes he freed in "Rise of the Planet of the Apes." Caesar and his followers are attempting to live peacefully in a tree-fort encampment in the forest, where they're even teaching their children to write – "ape not kill ape."

But for all its apparent stability, this band of chimps, orangutans and gorillas seems ill at ease, ostensibly concerned that humans will show up at any moment and spoil everything. They haven't been seen "in 10 winters," one of the apes notes, with the sign language taught by Caesar. Another hopes it means they're all gone.

That's unlikely in a Hollywood tent-pole blockbuster, though it's arguable that the movie – not only the apes – would have been better off without them.

Some humans soon wander in looking for a dam they hope will restore power. They're running out of fuel in nearby rundown San Fran, and desperately would like to charge their iPads.

When they arrive, both sides realize the problem: Caesar's huge band lives on the dam.

The makers of the latest "Planet of the Apes" have placed their bets on the wow-factor of this unusual encounter and its ensuing conflict. Only a small portion of the human population survived the epidemic that struck at the end of the last film, and the survivors are astounded to learn about apes that not only organize but also, when push comes to shove, talk. Or rather, shout.

"Go!" Caesar orders, backed by an army of spear-wielding apes. The wide-eyed humans go, but not for long.

"Dawn" then goes through a series of peaks and valleys in human-ape relations, which eventually devolves into open warfare.

The results open the film up to historical and metaphorical interpretation, but also to uncomfortable questions, such as why the apes wear face paint now. Have they become Comanche apes?

Such nitpicking during a movie like "Dawn of the Planet of the Apes" might not sound very evolved. But the movie often feels like a tug of war between good ideas and special-effects showboating. The movie looks fantastic much of the time, but some of it goes too far. Digital animation schools need to start teaching moderation along with rotoscoping and motion capture. Arguably, too many of the apes start talking for the movie's own good.

Granted, the human characters aren't always so sapient either. "The apes don't need electricity," one person realizes in abject horror: "That's what makes them stronger!" I hope the three credited screenwriters meant that line as irony, perhaps to underscore how grossly dependent Americans are on coal production. Otherwise they need a history lesson. It might be ubiquitous, but electricity still is relatively new. Nobody, human or ape, needs it.

And when the juice gets restored in the film, what's the first thing that happens? Two cringe-inducing product placements. One of them, forehead-slappingly, is for a filling-station chain.

Oddly, this is also the moment when "Dawn" rather disappointingly shifts its attention to its human characters, taking the final act in a pointedly routine direction.

Perhaps that was unavoidable. This is what happens, not when human meets ape, but when ambitious story meets the demands of a big summer-action film. There are odd consistencies between the humans of "Dawn" and the real ones who made it. Both strongly feel the need to blow everything up with exploding weaponry, no matter how absurd things must become to make it happen.