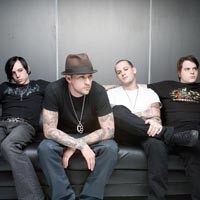 Though the members of Good Charlotte have been making headlines recently more for their personal lives than their music - between the two of them, front men and twin brothers Joel and Benji Madden have had very public relationships with Hilary Duff, Nicole Richie (who gave birth to Joel's daughter last year) and Paris Hilton - they've continued to move up in the music world. After opening for Justin Timberlake last summer, they're co-headlining their own tour, along with fellow pop-punk band Boys Like Girls. Good Charlotte's fourth album, "Good Morning Revival," was released last year and included hits such as "Dance Floor Anthem" (allegedly based on the Joel/Hilary relationship). Metro Station and The Main also perform in The Soundtrack of Your Summer Tour, at 18th Street in Shockoe Bottom Sunday, Aug. 3, at noon. $10-$20. 794-6700.