“(500) Days of Summer” puts a creative spin on the romantic comedy. 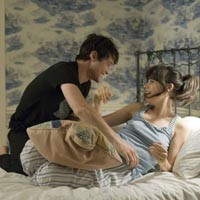 The couple that breaks up is also unusual. Even people who aren't very familiar with the rom-com genre might realize that this time the guy is more like the chick, and the chick is more like the guy, at least until the end, when they sort of switch. The differences between the two characters are important and purposefully noted, helping to create if nothing else a relationship between adults that feels closer to reality than we are used to getting in a comedy.

The couple is Tom (Joseph Gordon-Levitt), a copywriter at a greeting card company, and Summer (Zooey Deschanel), his boss' (Clark Gregg) new assistant. When they meet, Tom plays games in his approach to what he immediately sees as his dream girl, dismissing her as a stuck-up skank to his friends and addressing her with forced indifference.

Summer just bats her eyes and looks nonchalantly serious. She tells Tom up front that she's not into committed relationships and doesn't want a boyfriend, before grabbing him by the copy machine for an extended smooch, at which point he proceeds to tell his best friend Paul (Matthew Gray Gubler) everything he likes about Summer — her laugh, the way she licks her lips, her mole, her knees. “This is not good,” Paul says.

By then we have already been told with twin narrated montages that Tom and Summer have completely contradictory backgrounds when it comes to romance. Tom is the believer in true love, who grew up listening to weepy British pop bands that instilled the notion of a perfectly-matched soul mate. A deeper listen to Tom's favorite band, the Smiths, would reveal a more caustic view of romance, but maybe Tom is moved by the music, not the words.

Summer grew up in the wake of a bitter divorce. She values her youthful independence and doesn't have much faith in love. She wants to be with Tom, but she doesn't want to put a label on things. It takes a lot of drinking by one of Tom's office buddies, McKenzie (Geoffrey Arend), to recognize what's going on here. Summer, he declares, is a dude.

The implied slur upon Tom is made clear about 100 days or so later, when Summer drops the breakup bomb on him, comparing their relationship to “Sid and Nancy.”

“I'm hardly Sid Vicious,” Tom protests, at which he receives some undesirable agreement from Summer. “No,” she explains, “I'm Sid.”

“(500) Days” tells its nonlinear story with the help of a grab bag of visual aids — characters and settings turning into hand-drawn versions of themselves and the like. The morning after Tom first gets to go to bed with Summer is another surprising and enjoyable example, when he emerges triumphant, looking into his reflection in a car and seeing Harrison Ford circa Han Solo before dancing down the street to “You Make My Dreams” by Hall and Oates.

Directed by longtime music-video director Marc Webb, the movie integrates these light, spontaneous-feeling asides and story-telling aids while only occasionally crossing the line between clever and too cute. There's also a minor character or two who seem extraneous. But the good news is we want more, not less, Tom and Summer.

Gordon-Levitt's atypical casting is a relief from the usual square-jawed pretty boys common to this type of movie, whereas fans of Deschanel can rest assured they will get their fill of cute; she even gets to sing an alt-country cover song just like she does in her real-life, popular indie band She and Him.

The movie sees things from Tom's point of view, making it tempting to write off Deschanel's performance as one-dimensional, though if she's supposed to be the unemotional, insensitive guy, it's convincing.

At the movie's conclusion, Summer and Tom reassess their notions of love on a city bench in a memorable conversation that should have closed the picture. Though they don't seem to realize the irony of their newfound points of view and all that it entails, it's obvious to the audience, which is then diverted by a disappointingly conventional coda. “(500) Days of Summer” is an otherwise gratifyingly individual take on modern love, even if it's about one day too long in the process. (PG-13) 95 min. HHHHI S