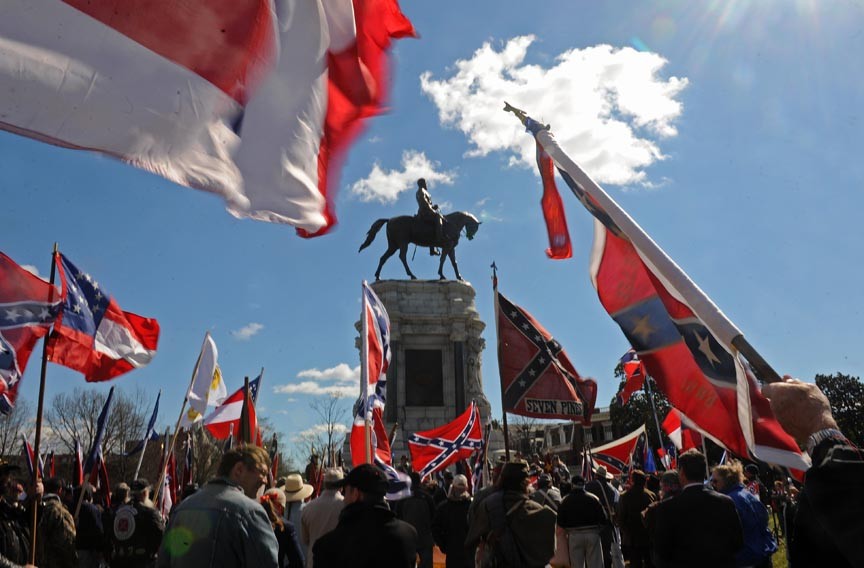 The director of the NAACP in Virginia isn’t remotely surprised by plans to fly a giant Confederate flag just off of Interstate 95 in Richmond. “We’re in the Capitol of the Confederacy,” King Salim Khalfani says. “The Civil War never ended for them."

That’s not to say Khalfani doesn’t have thoughts about the impression a 15-foot-wide Confederate battle flag might leave with tourists and visitors passing through Richmond.

“There goes the rebranding -- with ‘RVA’ and all that stuff,” he says. “Anybody in the city that has any consciousness should be appalled that that’s going to be one of the symbols introducing people to Richmond.

“I know, at least for people of African descent, if they see it and they’re not from here, they’ll be like, ‘Damn, what kind of yokel joint is this?’”

Indeed, the national political magazine Mother Jones broke the news earlier today that a group called Virginia Flaggers intends to install the road-side flag by Sept. 28. The tone of the article isn't exactly flattering to Richmond.

But Susan Hathaway, the spokeswoman for the flaggers, says the plan is only meant to honor southerners, not denigrate them.

“The flag will serve to welcome visitors and commuters to Richmond, and remind them of our honorable Confederate history and heritage,” she says, in an announcement posted Saturday on an obscure conservative blog.

The flag will fly on the interstate just south of the city. In an interview with Style, she declines to give the exact location, saying she’s worried about possible threats and vandalism.

Does Hathaway view her group’s plans as they will be widely interpreted -- a deliberately provocative gesture?

“Absolutely not,” she says in an interview with Style. “We’re putting this up for one reason and one reason only -- as a memorial. It’s not a stick in anybody’s eye. There are lots of place we could put it if we wanted to intentionally stir up trouble.”

She says Khalfani and others are attaching the wrong meaning to the flag, arguing historical facts when asked how a flag flown by a group of people fighting -- at least in part -- to preserve the institution of slavery could represent anything other than oppression to black residents. And she points out that slavery was a legal practice in the United States for years, but that no one argues the U.S. flag is a symbol of hate.

“I think that society has allowed us to become almost ashamed to our heritage because of the mistruths that are taught,” she says. “Some people want to put a stigma on one flag and rather than stand up and say this flag is my great, great grandfather’s flag.”

This wouldn’t be the first Confederate to fly near an interstate in the South. Until recently a 30 by 60 foot version of the stars and bars flew off I-75 in Tampa, Fla. It was hugely controversial and later was replaced with a slightly smaller flag, though only because the original wore out.

There are others, Hathaway says. And the practice is what inspired her group to pursue the tactic in Richmond.

Meanwhile, Khalfani of the NAACP says the whole thing is an embarrassment, and an affront to what Richmond is becoming. The prospect of a giant Confederate flag welcoming visitors to Richmond fills him with sarcasm. “That’s going to attract a lot of people,” he says. “Yeah. Great.”