Ghosts of the Fan

Helen’s employees recount their paranormal experiences working for the most haunted restaurant in Virginia. 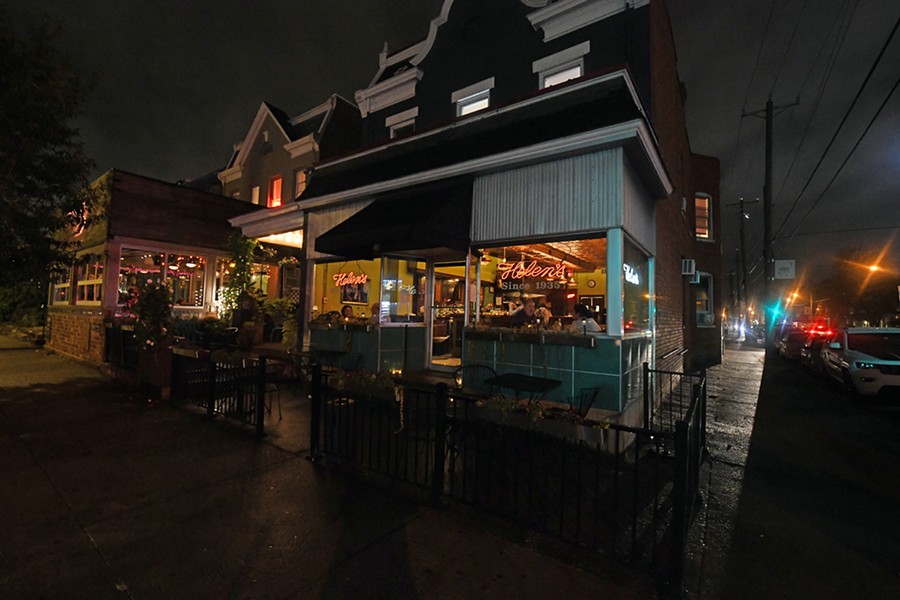 For someone who owns Helen’s, recently named the most haunted restaurant in Virginia by the Food Network, Leslie Tuite is surprisingly calm.

“I thought it was the best award I’ve ever gotten,” she says.

Her daughter Claire whizzes by in her crimson clogs, carrying plates of pork belly topped with sweet potato puree to customers. The alluring smell distracts briefly from the metallic copper ceilings and glowing cursive Helen’s sign the owner describes as speakeasy chic.

Tuite wanted to honor what Helen Donati built in 1935, which is why the original 1900s tile floor and booths that have corkboard-like feet, are here to stay.

Apparently, so is Helen.

Once the renovations were underway and Leslie took over the abandoned restaurant in 1994, the Donati family left a simple warning:

“Don’t be surprised if you see or hear anything down there.”

Here are just a few stories from the family of employees who say they have experienced paranormal activity while on the job, and some who’ve seen Helen herself, even though she died in 1967.

After 25 years, Leslie’s gotten used to the flickering lights, cold gusts and cooks’ tongs vanishing before reappearing. But a few times have freaked her out more than others, such as when she encountered a dark, smoky figure in the dishroom.

Once when she was arguing with a friend after closing, a brandy glass was strewn across the bar floor as if it’d been thrown. No one else was in the restaurant.

And during the renovation period, Leslie saw the figure who would inspire her Halloween costume this year.

“I turned around and I saw her. Floating across from the end of the bar straight into this booth,” she says, noting that it looked exactly like old pictures of Helen. “Down to the apron and ’30s dress and hair pulled back … it was as if she was still serving.” 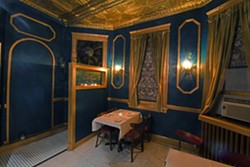 But it does seem like someone is always watching.

Just ask the bartender closing up one night, who was making out with his girlfriend and looked up to see Helen’s face in the window.

Claire jokes that closing shifts are primetime for ghostly happenings, with only one person in the restaurant hearing the sounds of someone walking and humming.

Siler first noticed something odd when employees were sitting at a booth after hours and everyone could hear someone ripping paper towels out. Except there were no paper towels and no one was there. He also says the doors leading into the dishroom have always been a spot where figures frequently pass.

“The way it glows at night draws your attention,” he says. “The shadows would pass through probably 20 feet down the dish pit. You know you see something but there’s never an explanation for it.”

Edwards, who’s been a bartender at Helen’s for as long as there's been a bar, joins the group we’ve established in the back corner. It feels similar to the circle made famous by “That ’70s Show” but instead of passing a joint, everyone’s reminiscing on ghost stories.

He describes a vintage ’50s school clock with a quarter-inch glass bowl placed over it that used to hang on the wall.

One night after closing, it decided to do its own thing.

“The clock shot off the wall and smashed into 1,000 pieces across the kitchen,” he says. “And we all kind of looked at each other like, ‘We’re coming back tomorrow to clean up.’”

He’s also seen figures go through doors that don’t exist, where the other side of the wall is a storage room with a refrigerator. Other times, it’s been inexplicable crashing.

“It sounded like someone just took a dozen or more plates and threw them on the ground as hard as they could,” he says.

“Then when we walk back into the kitchen, nothing was there. Nothing was broken.”

Before diving into his experience, John clarifies that Catholics aren’t supposed to believe in ghosts.

“Most Catholics do though,” he says, chuckling.

He takes a hearty bite of his halibut dish before pointing to a nook in between booths that houses the coffee machine, plates and cups.

“There’s an old telephone booth,” he says, mentioning that it’s the same one from when this building was a pharmacy in 1912. “I saw a small plate go swoosh, straight out and then pew.”

There’s a lot of breakage and plates flying.

Claire’s been told by three or four mediums and ghost hunters that something paranormal attached to her in the restaurant when she was a teenager.

“I was like ‘Uh, OK?’ but then two other mediums that don’t know each other said that [same thing],” she recalls. “I actually think it’s something protective.”

Servers frequently go up and down the basement stairs for restocking purposes. John advises people to always hold on to the rail since they’re stairs from the 1900s. After the door was removed to make the trip easier, Claire and her friend would see shadows coming up and down whenever they were in the office late night.

The basement door is now permanently put back on with a massive note to remind employees to keep it closed.

Edwards and Leslie suddenly burst into knee-slapping laughter at a shared memory. Once, while talking about ghost stories and Helen, they heard a loud explosion, mid-sentence.

“It was like that ‘Seinfeld’ episode where they’re pushing everyone away trying to get to the front door,” she says hysterically.

“A transformer blew out outside and a friend I was with went, ‘The bitch took out the whole block!’”