“The Eternal Daughter” is one of the most beautiful and devastating films of the year. 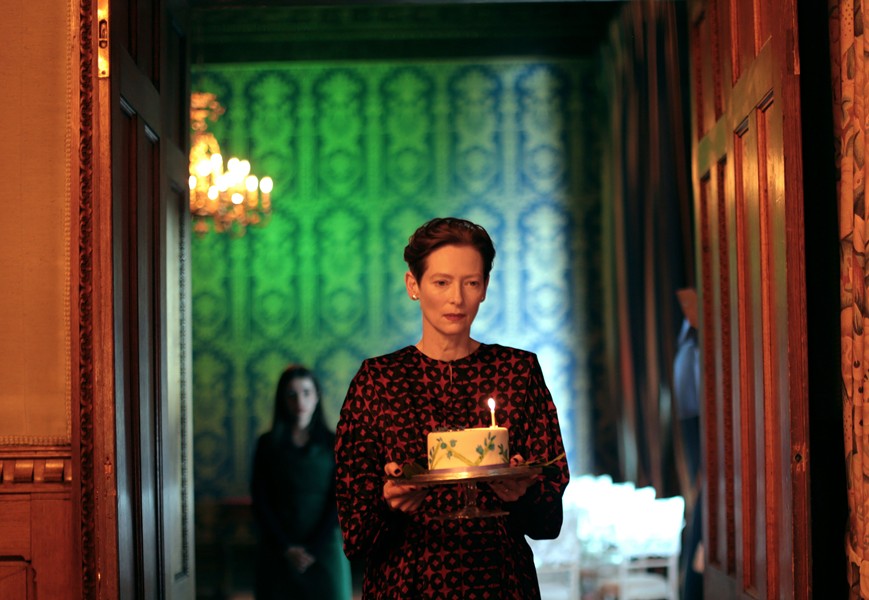 British actress Tilda Swinton plays dual roles in director Joanna Hogg's "The Eternal Daughter," and does some of the finest work of her career.

In a listless year where blockbusters and swing-for-the-fences auteur projects have felt like business as usual, at best, Joanna Hogg’s “The Eternal Daughter” offers a tonic. It is a wonderful example of an artist redefining her aesthetic, firstly by means of stripping down resources. With one setting and two predominant characters, played by the same actor, Hogg fashions one of the most beautiful and devastating films of the year.

Hogg’s films often strike me as self-conscious, remote, and overtly diagrammed. Those descriptors certainly apply to Hogg’s prior film, “The Souvenir Part II,” of which “The Eternal Daughter” is a continuation. It has been reported that Hogg shot “The Eternal Daughter” on the sly with actress Tilda Swinton during post-production on “The Souvenir Part II.” Perhaps that speediness of production unlocked her intuition, allowing Hogg to riff with the planning of the prior film serving as a guiding compass. This contained, streamlined, subconscious movie might’ve been what Hogg was after all along.

“The Souvenir” and “The Souvenir Part II” were a collective remembrance of Hogg’s coming of age as an adult filmmaker, following a young woman who makes a movie about a relationship with a grifter and an addict. That woman, called Julie and played by Honor Swinton Byrne, had a mother called Rosalind who was played by Byrne’s mother, Tilda Swinton. “The Eternal Daughter” takes these referential games one step further: It’s years later, and Julie is a middle-aged adult now played by Swinton herself, with Swinton also playing Rosalind. Julie takes Rosalind to stay for a bit in a mansion from their past that has been converted into a hotel. Julie wants to make a film about her mother, or more to the point, reconcile the distance she perceives to exist between them.

This distance is made material by a simple technical trick executed by Hogg with heartbreaking shrewdness. Julie and Rosalind rarely appear in the same frame together, as Hogg sustains the illusion of one actor in two places at the same time by the old-school means of splicing together takes. A series of shots of Swinton in the corner of the bedroom playing Julie will be crosscut with shots of Swinton lying in bed playing Rosalind, for instance. Most films these days utilize CGI for such illusions, so that the result is seamless and fluid and taken for granted. Hogg wants you to notice the artifice.

These women appear to exist in separate, parallel slipstreams, and this editing embodies the feeling people have of being able to talk to their parents but not truly reach or hear them. The gulf of differing experiences, differing baggage, can be impossible to navigate. Occasionally, Hogg will abandon this device and show the women in a room at the same time and the viewer is almost pitifully grateful. We want them to commune. Even more rapt are the sequences in which their disembodied hands touch in the center of the frame, with no faces visible. These are ironic images: The women are touching but not really. One of those hands almost certainly belongs to someone else outside of the frame.

The casting stunt magnifies this gulf, this sense of missing and loss. Familiarity with “The Souvenir” movies will not affect your understanding of “The Eternal Daughter” in terms of plot, but they are necessary emotionally. Let’s try to keep it straight: Tilda Swinton is playing a role once played by her daughter, a character who is desperate to connect with her mother, whom Swinton also plays. These nesting performances are a dialogue with self over relationships with elder and younger generations, and they suggest that Swinton has subsumed her own daughter. Baggage accrued from a parent can be passed on, and Hogg and Swinton bundle all that up into a double-performance. It would be easy for an artist to get drunk on the trickiness of such a set-up, but Hogg’s mannerly simplicity allows it to breathe. We’re never told what to think; these reverberations are allowed to be.

Speaking of getting drunk on trickiness, that is often what Swinton has been doing onscreen for the last decade or so. She has become an icon for hip filmmakers in the States and abroad alike, and her performances have been rich in ticks and self-congratulatory poses. Swinton’s acting in “The Eternal Daughter” is her best since her work in the underrated “Julia” and ranks very highly with the best work of her career. Her differentiation between Julie and Rosalind is remarkable. Julie has a note of pleading in her voice that undercuts her physical steeliness, while Rosalind, aware that her opinion weighs on her daughter, laces every proclamation with reassurance. This reassurance signals a benign resignation to unhappiness that’s profoundly truthful of certain elderly people, and which few films outside of those by Ozu seem to grasp.

We know what Julia wants: closure with Rosalind, for this trip to deliver a catharsis on cue, even if she can’t quite admit to something that sounds so banal in theory, yet is so brutally important to many of us as we attempt to make peace with middle age. But what does Rosalind want? The tricky answer, impossible for younger people to understand, may be that she wants nothing. The trip to this hotel, which unlocks secrets to Rosalind’s past, may nevertheless just be a roleplay for her, a way to humor a neurotic daughter. Rosalind is perceptive enough to understand that her natural method of giving love isn’t strong enough for Julie, who requires a much louder current for it to register. But Rosalind’s overcompensations don’t work either. Astonishingly, all this subtext exists in the musical interplay of Rosalind and Julie’s methods of speech, in the detailed, crisp, diamond-hard directness of the dialogue that Hogg and Swinton have improvised.

I’m presuming that it’s impossible to watch “The Eternal Daughter” and not think of someone you have lost or feel you may soon lose. The film has a hushed, tranquil quality, intensified by the gothic, impressionist cinematography that heightens one’s awareness of small yet piercing details. Rosalind eating toast with tea and marmalade in bed, content while Julie worries over something, so vividly brought to mind my mother’s own breakfasts that I had to take a moment. My mother is not dead, and we are very close, but this film brings to life the fragility of such gifts.

We are allowed to understand through passing references that Julie may feel guilt for never having a child of her own, and that her need to become caretaker for Rosalind may be her need for a chance for atonement. Her need to write a film about mom bridges a failure of motherhood with what for Julie was its substitute: filmmaking. This is worth repeating: Hogg never has to speechify to get these complex associations across to the audience. “The Eternal Daughter” is so unmooring because it weds merciless lucidity with mystery, an oxymoron that reflects the confusion of attempting to make sense of life.

Hogg keeps springing bold flourishes. In a pivotal moment, she breaks the “180-degree rule,” a mode of alternating camera angles so that audiences don’t notice editing, to connote shifts in emotion. In a wrenching dinner scene, where Julie begs for Rosalind to be hungry so they may eat together, Hogg redefines the story we’re watching with a shocking single cut. The film’s gothic, haunted-hotel vibe is also a departure for Hogg, though she proves to be a master of those conventions. Her resistance to explication is pivotal to ghost stories. We’re led to wonder what uncanny things may be in a trick of a shadow, a glint of fog, a creak of a doorway. All great ghost stories, and “The Eternal Daughter” is among them, understand that the scariest thing in the dark is us. Our fears, our longings, our private conviction that loneliness is bottomless.