Ghost in the Machine

Much has been written of Richmond's paranormal past, but 50 years ago, one particular Ghost spoke out against segregation, brutal local police tactics and the College of William and Mary's patronizing stranglehold on what one day would be Virginia Commonwealth University.

Nine issues of The Ghost were "published when needed" between February 1960 and August 1961 by self-described 20th-century scalawag Edward H. Peeples and his friend, transplanted New Yorker Richard Kollin. Arguably the city's first modern-era true underground publication, the Ghost was passed around the Fan and Richmond Professional Institute, known colloquially as RPI, at the height of the civil rights era.

The Ghost was launched out of Peeples' acute frustration with a bigoted racist philosophy dubbed the Virginia Way, coined by Douglas S. Freeman of the Richmond News Leader, supported by the Byrd political machine and endorsed through vitriolic pro-segregationist editorials by the News-Leader's James J. Kilpatrick; Virginians, as The Ghost proclaimed sarcastically, were able to "segregate like gentlemen," not like those "rubes in Alabama who give segregation a bad name."

"We feel that The Ghost should be provocative and 'newsy' and that it will become the overt voice of your wishes and desires of RPI and the Fan district," the 1960 debut issue announced. The magazine's primitive mimeographed layout belied its authoritative skewering of sacred Richmond cows, including the tacit acceptance of social injustices against women and blacks that largely had gone unchanged since post-Civil War days. "Challenging segregation and the Virginia way was our main goal," Peeples explained.

A varsity basketball starter, 1957 RPI graduate and self-professed "spy for the black community," Peeples participated in the infamous early '60s lunch counter sit-ins with other Richmond notables, including Doug Wilder and Edward Meeks Gregory. "I was never arrested," the Richmond native insists, "but I have been thrown out and fired from a lot of places, including RPI."

RPI — the grandfather of Virginia Commonwealth University — was considered a brash, blue-collar school — "'College for the rest of us'," according to Peeples, and "a hotbed of slanderous stereotypes" according to the News Leader — scorned in its own city and virtually ignored by W&M overseers. Embracing its reputation as a working-class upstart, RPI students maintained a strong sense of college pride while attracting a large number of Northerners, mostly because of the enormous respect that RPI art school founder Theresa Pollak commanded in New York.

After a post-graduation stint in the Navy, Peeples rejoined Richmond's counterculture in 1959, excited to be "connecting with the Richmond radicals — both of them." He patronized the 900 block of West Grace Street, where — according to The Ghost — 85 percent of all Richmond's 1959 felony arrests occurred.

"The Village Restaurant was the gathering place," Peeples says, explaining that the communists, leftists, beats and artists all staked out their corners of the restaurant to pontificate on their pet causes. Nearby on that block was the Meadow Laundry and art gallery (where the Village Restaurant stands today) and the reopened Lee Theater: "The Ghost offers three hearty cheers to the Lee Theater opening, and particularly, for [Ingmar Bergman's film] 'Wild Strawberries.' We need the Lee Theater, and they need us." Also on this strip — and a possible reason for the high number of arrests — was the presence of a gay beer joint, Eton's. 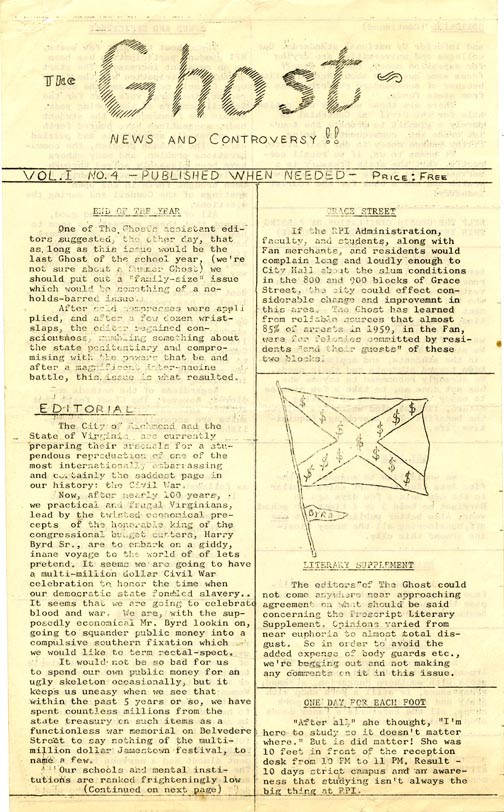 Peeples and his small number of like-minded radicals worked tirelessly to drive their egalitarian causes into the hearts of the Richmond aristocracy. "We were shakers, but not movers," he says, laughing, recalling an Adlai Stevenson rally organized in Monroe Park in 1960 that drew "about a dozen supporters" — and sadly, no Adlai.

During its brief run, The Ghost was fearless in exposing racial inequities in college sports. One scheduled basketball game between RPI and Union Theological Seminary was "mysteriously called off" because there was a "negro player" on Union's team. "There is a vague policy," The Ghost opined, "enforced by some vague bureaucrat somewhere in the W&M administrative scheme, restricting RPI and Norfolk Division from competing against anyone but bright blue-eyed Aryans."

Suffocating rules enforced on female RPI students by dorm mothers was another thorny issue. The Ghost noted, "We still enjoy the puritanical delusion that a thick, gooey subterfuge of archaic rules will preserve chastity and repute." Women who served as army WACS weren't permitted to live in the RPI dorms, the mag reported. "It seems the administration feels these girls are much too worldly for OUR little women!"

A regular feature, "Les Gendarmes," charted the actions of the Richmond police. It featured a cartoon of a snarling police dog, along with a caption: "The Ghost submits this drawing to city council as a possible substitution for the present Richmond city seal." Some articles remind us that times haven't changed. One recalled how the police's "intolerant, tactless handling of noise complaints" resulted in students getting dismissed from the institute.

The editors eventually accepted future author and then-recent RPI graduate Tom Robbins into their fold. "Robbins was not interested in the social issues," Peeples recalls. "He just enjoyed savaging Southern culture. ... My friendship with Robbins ended when he said that using drugs was OK."

By August 1961, Peeples became heavily involved in numerous civil rights causes, including documenting the Prince Edward County school closings. Kollin, meanwhile, went back to Columbia University for his master degree (he died last year). This forced an end to The Ghost.

Peeples is now retired, as emeritus associate professor of preventive medicine and community health at VCU, but he remains as fiercely loyal to his alma mater as to the social causes he pursued more than 50 years ago. "Ed is one of VCU Libraries' biggest supporters and is a wealth of knowledge," says Special Collections archivist Ray Bonis, who maintains a large, collection of papers in the James Branch Cabell Library documenting Peeples' work in civil rights. This includes four surviving copies of The Ghost, housed in Cabell's Special Collections.

"We [in the movement] nailed and eliminated the de facto expressions of white supremacy. ... We took that as far as we knew how," Peeples says of the seminal tract. "We now ask this generation to kick democracy up another notch." S

Note:This article has been corrected from the print edition.