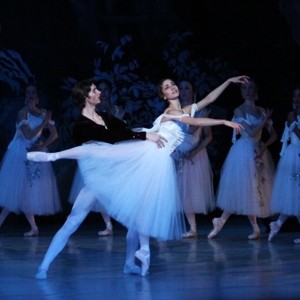 It's mid-February, that charming time of year when our thoughts turn to romance. What better way to say "I love you despite your ripping my heart out" than to save your lover from being danced to death by a clan of men-hating female ghosts?

Such is the plot behind "Giselle," staged over the weekend by Richmond Ballet with updated staging and choreography by the ballet's artistic associate, ballet master Malcolm Burn.

The first act is stunning with its richly warm-colored Rhineland set resembling a page from a Grimms' fairy tale with gorgeous costumes to match, all expertly designed by Charles Caldwell and beautifully lit by Tony Tucci. Giselle, danced tonight by Shira Lanyi (Cecile Tuzii played the part in alternate performances) is the focal point of a love triangle between her previous beau, local gamekeeper Hilarion, danced by Phillip Skaggs, and Albrecht (played this night by Thomas Garrett), a duke in disguise.

Skaggs demonstrates a graceful raw energy in the role as the jealous lover who succumbs to grief and rage when Giselle dies towards the end of the act (Igor Antonov danced the role in other performances). Though Lanyi and Garrett dance well together, they are upstaged by a pas de deux performed by the perfectly matched Maggie Small and Fernando Sabino, who are so in sync with each other they practically move as one entity. Lanyi does a fantastic job in her final dance in the scene as Giselle loses her mind (and life) upon discovering that Albrecht is engaged to be married to someone else, capping Act I with dramatic flair.

Act II is a drastic change in tone and staging. Where the first act is warm and filled with storytelling near pantomime movement, the second act is all cool blue hues in set and light colors and all about dancing. The introduction of the Wilis, those man-hating sylphs who are spirits of young women jilted before marriage, begins with a few dancers as they singularly dance across the stage presenting the effect of skirted ghosts floating through a midnight glade. Valerie Tellmann commands the stage with her inner goddess energy as Myrtha, Queen of the Wilis as she flawlessly leads the Wilis in the grand pas des Wilis. Skaggs again expresses amazing energy as the Wilis dance Hilarion to his death. Lanyi and Garrett have some lovely moments, particularly in the beginning of the act as she is revealed to him in her ghostly form.

Overall, this visually pleasing production with its theme of forgiveness and enduring love is the perfect calorie-free confection to commemorate Valentine's.

For information go to