Getting up Early: Leggs and Eggs

Guys like to see something different for breakfast instead of just going to Waffle House. 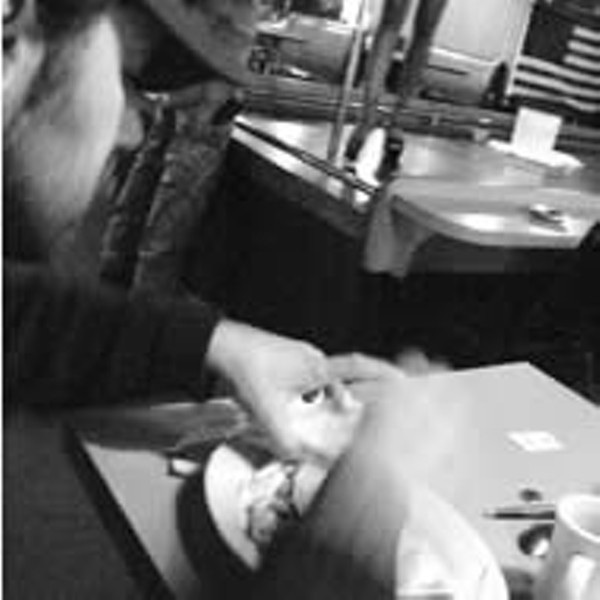 "Think about it," says Andy Elder, the morning line cook, when asked about the impetus for the Leggs-and-Eggs concept. "Guys like to see something different for breakfast instead of just going to Waffle House." Elder stalks the kitchen from 7 to 11 a.m. Fridays in an oversize white buttoned-down shirt, smoking and running a palm over his bleary eyes when the crowd fizzles out.

We found the place all but empty that morning at 8 with a lone customer at the bar drinking beer and playing video pool. "It's hit or miss," Elder says, sighing. "Last week it was packed."

Chalk it up to the sunny, early April morning — though you'd have never known it sitting inside. Daddy Rabbit's shares a vibe common to strip joints everywhere: the perpetual, purple darkness, lingering cigarette smoke and the whiff of stale beer. The live, lazy version of Hotel California bleats from bassy speakers, and we catch first sight of a stripper — Savannah is her name — hanging limply from a brass pole, her moves oozing obligation under the lonely black lights.

We order coffee and spend a few hazy moments probing the table for cuplets of half-and-half. Then Elder slides into the booth and piques our interest with his special dish. "It's a four-egg omelet," he says. "You can get anything in it you want. I'm really good at it, not breaking it, rolling it."

It comes out big as a hubcap, cheddar dripping from the folds. Good as it is, Elder believes he can do better — he's taking a culinary arts class at J. Sarge next semester to bone up on his cooking.

Nauty, a dancer in a small black top and short shorts, joins us after the meal. She seems unfazed by the inherent clash of Leggs and Eggs. "I think it's cool," she says, despite the lack of morning customers. She dances most Friday mornings after seeing her kids to the school bus, and, working for tips, says she averages about $100 before lunch.

As it happens, Elder doubles as the security guy, tagging along for private lap dances to make sure nothing goes awry. The whole thing brings one burning question to mind: Do the guys ordering a morning lap dances have egg breath? Nauty barely bats an eye. "No," she says, "They always have beer breath."

Nauty admits it's a little tough making it in at 7 a.m. for her Friday gig, especially after working Thursday nights. "But that's OK," she says. "I needed to start getting up early anyway."