Six lingering questions and answers about the crowds at Richmond's big bike race. 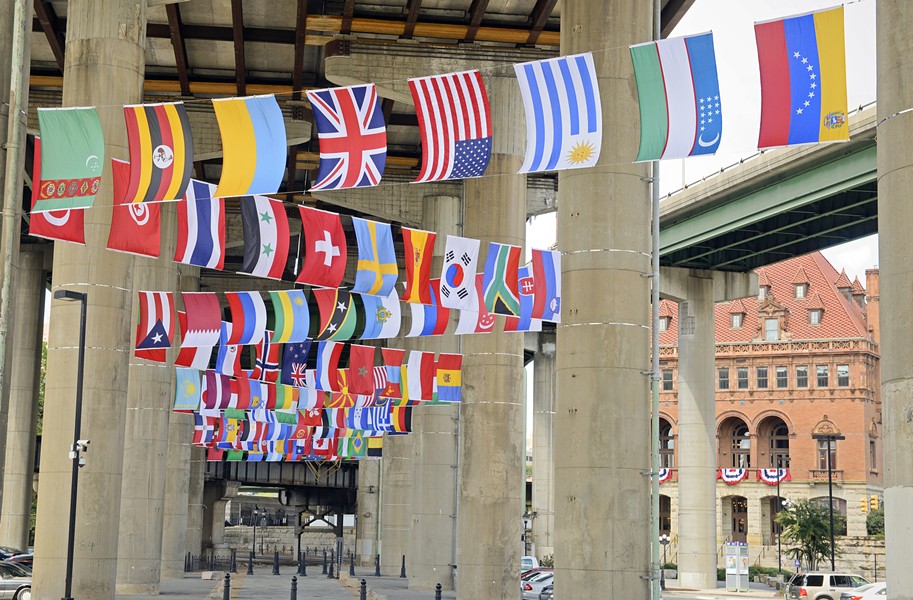 Ash Daniel As reported by the Times-Dispatch on Monday, upside-down flags — a sign of distress or protest — were hung incorrectly in the Main Street Station area, intended to welcome international racers and visitors to the UCI Road World Championships. City spokeswoman Tammy Hawley told the T-D that the issue was being corrected.

With the 2015 UCI Road World Championships drawing closer, some skittish Richmonders are wondering just how many people will show up — and how much disruption will be caused — during the event running Sept. 19-27. Some nagging statistics and varying answers continue to cause confusion. But here’s where things stand:

How many will be here for the event?

The question has been the source of much misunderstanding, in part because race promoter Richmond 2015 has trumpeted the figure of 450,000 spectators for several years. That draws from a 2013 study by local forecasting company Chmura Economics & Analytics. The number has been touted time and again in news media and on race websites. But what are “spectators,” exactly? It’s anyone who attends the race for one day, says Lee Kallman, vice president of marketing for Richmond 2015. If a West End resident drives in to see four days of the race, that counts as four spectators. Ditto for a foreign visitor.

Why is the impression so strong that there will be 450,000 people?

Paul Shanks, the director of communications and digital marketing for Richmond 2015, says that media have mistakenly characterized the total attendance as 450,000 — a figure touted on the group’s website.

“I have called the media many times and said that it should be ‘spectators,’” Shanks says. He’s attended 250 local meetings to make sure local residents understand: “Half a million coming is nothing we intentionally put out there.”

In an Aug. 10 blog posting, Chmura Economics & Analytics blames media for the hyped number and notes that “spectators” may be counted multiple times over several days. People staying overnight are estimated to total more than 50,000. It would be about 60,000 if teams and their staff attend, Chmura notes in the blog.

So how many of those spectators will be visiting from out of town?

There are no simple answers. Race spokesmen say that about 40 percent of the 450,000 spectators are expected to be from elsewhere — which works out to about 180,000 out-of-towners due to attend all or part of the races. Some of them will stay overnight. Others will head back home. Organizers also have said an average of 41,500 visitors will be here for six of the nine days. Other estimates range from 50,000 to 60,000. As a comparison, the Richmond Folk Festival has seen crowds of more than 200,000 during its three-day event in October.

Have such varying numbers played havoc with the hospitality industry?

Yes and no. Steve Kendall, general manager of the Hilton Richmond Hotel & Spa a little west of Short Pump, says predictions of race attendance have been a disaster. “They overestimated,” he says, “and people don’t want to come here if they think a half a million people will be descending on Richmond those dates.”

Kendall first learned of the problem at a Chamber of Commerce meeting earlier this year. Now, his bookings for September won’t be even what they were for the month last year, he says — though he’s booked 100 of his 250 rooms for bike race teams and support staff.

Not so for Rand Goodman, director of sales and marketing at the downtown Richmond Marriott. “We have some rooms still for the first half of the race event but only a handful left for the last half,” he says. One advantage is that his hotel’s Broad Street location is almost directly on the races’ start and finish lines, he says: “We’re very happy with it.”

It’s also been noted that the bike race won’t necessarily be gravy on top of normal occupancy numbers, because organizers of other events, conferences and weddings that would have come to Richmond in September may have chosen different dates to avoid the races.

The number to compare against when the race is said and done is the September 2014 average occupancy rate for Richmond-area hotels. Richmond Region Tourism says that figure was 61.1 percent, citing Smith Travel Research.

What about VCU and local schools?

Students at Virginia Commonwealth University’s Monroe campus get a break. Race days are considered “reading” days. Dorms are open, but there will be no classes. The school has jiggled its schedule to make up for them. Henrico County students will be off Sept. 23 as will Hanover County students who will make up the time on Columbus Day. The Richmond Public Schools will be open.

Did anyone make it legal to rent out my place on Airbnb?

Nope. You still can’t use the online service to rent out your room, house or apartment for fewer than 30 days in Richmond. An effort led by 2nd District Councilman Charles Samuels to address the problem failed. In his autumn newsletter to constituents, Samuels writes that he was “disappointed we were not able to address zoning issues regarding Airbnb and other online, short-term rental businesses in time for the race, but I am confident it will be addressed as quickly as possible while still allowing for maximum public involvement.”

Editors note: This version corrects an earlier one saying that Henrico County students will make up a lost day on Columbus Day.