Get Thee to a Punnery

Barksdale's hilarious “Nunsense” can be a hard habit to break. 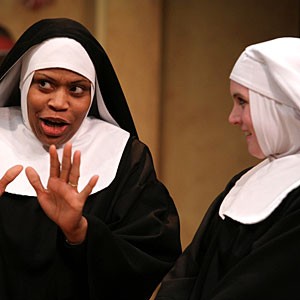 After a bad batch of vichyssoise kills off 52 nuns at a convent, the remaining Little Sisters of Hoboken decide upon an emergency endeavor to pay for the burial of the last of their deceased: They'll showcase the nuns' musical abilities in a talent show.

As one of the longest-running off-Broadway shows in history (second only to “The Fantasticks”), “Nunsense” jumps from ballet to Gershwin to Carmen Miranda in a silly plot about the sisterhood. Full of bad jokes — such as St. Francis was “a sissy” — the show manages to be irreverent enough to be interesting, and toned down enough to offend only the most pious.

As Sister Mary Regina, the Reverend Mother, Catherine Shaffner reels in the laughs even while stressing about the oncoming arrival of the Hoboken health inspectors (the sisters ran out of money to bury the last four nuns, and are storing the remaining corpses in the convent's walk-in freezer).

Debra Wagoner shines as Sister Mary Amnesia, the comical nun who can't seem to remember anything since she was hit over the head with a giant crucifix. Wagoner creates a character that infuriates the Reverend Mother while thrilling the audience and other nuns alike, especially when she brings out her puppet, “Sister Mary Annette.”

Jan Guarino's Sister Robert Anne takes pleasure in stirring the pot, the Hayley Mills to Shaffner's Rosalind Russell. Guarino imbues the show with a sense of mischief in numbers such as “I Just Want to Be a Star,” or infuriating the Reverend Mother with such stunts as hopping on an exercise bike and cackling like the Wicked Witch of the West.

Terrie and David Powers' scenery is a spot-on recreation of a school gym, complete with green-bricked walls, the school seal on the floor, and set pieces from the fictional junior high's production of “Grease.” Guarino's choreography is inspired, whether it's Sister Mary Leo en pointe, a nun conga line, or the whole company flouncing around in their habits.

Around the time they started making jokes about a wild west TV show titled “Nunsmoke” I've had my fair share of puns, but I'm sure plenty of others will enjoy this fun romp that chooses to emphasize one-liners over plot. S

Barksdale Theater's “Nunsense” plays through Feb. 6 at Hanover Tavern, 13181 Hanover Courthouse Road. Tickets are $38, and can be purchased at barksdalerichmond.org or by calling 282-2620.