Get Me to the Greek

Byram's is getting a lot of attention these days. 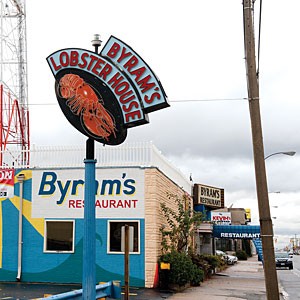 Konstantinos “Gus” Nikiforos is a busy man these days. He's in the midst of trying to sell his restaurant, Byram's Lobster House on West Broad Street. He's held an open house to showcase his business to prospective buyers and is holding an online auction. And on Dec. 15, Nikiforos is supposed to appear in Richmond Circuit Court for allegedly damaging a competitor's building and threatening to blow it up.

Dionna Kelleher, the owner of McLean's Restaurant, was looking for a place to move her restaurant when she came upon Byram's. After initially showing interest, Kelleher decided that the building next door would be better suited to her needs. Angered, Nikiforos allegedly threw a caustic metal-eating substance onto his neighbor's storefront and threatened to bomb the building.

Nikiforos has been indicted on felony counts of threatening to burn or bomb a building and for destruction of property. He is being defended by state Delegate G. Manoli Loupassi, himself the son of a Greek immigrant who founded the Robin Inn restaurant on Park Avenue.

Long past its prime, it seems the only customers at Byram's these days are people who remember when it was still a happening place. I've heard stories about bad, overpriced food, strange dAccor and ancient clientele. A colleague said during his last trip to Byram's the octogenarian next to him had such an extensive coughing fit he was afraid the man might keel over. Fearing the worst, I pass Byram's neon lobster sign and head in.

Nikiforos himself greets me at the door.  The servers hanging out at the bar suddenly snap to attention and scurry away to appear busy. Nikiforos is extremely personable, and makes me a Manhattan while I wait for a friend.

The furnishings are what you'd get if you combined a New England seafood shack with Tony Montana's cocaine palace. The restaurant is done up with Grecian urns and classical artwork, but also has models of clipper ships and ocean liners under glass. The '70s-style green rolling chairs and dusty fake plants give the impression that nothing has changed here in decades.

We sit underneath Venus de Milo, across from Bernini's David. A large empty lobster tank gurgles away behind me as I pull my elegantly folded napkin out of an AP glass. At 7 o'clock on a Sunday evening, the place is completely empty.

The menu shows an interesting clash of cuisines: spanikopita and chicken wings next to a shrimp cocktail; fettuccine chicken tenders and moussaka next to shrimp parmigiana. I order a dozen raw oysters on the half shell as an appetizer.

After the server leaves, my partner in culinary mischief leans in and says, “I've never second-guessed a single decision you've made in your life until just now.” But surprisingly, the oysters are tasty and fresh. The chicken marsala my friend orders is flavorful with just the right amount of mushrooms. My 6-ounce lobster tail is pretty good, if a tad overcooked. The server is experienced and knows exactly when to show up to refill a drink or chat and when to disappear and let the guests converse. All things considered, I am fairly impressed.

Leaving, we pass a large half-naked statue holding a trident. I ask Nikiforos whether the statue is of Poseidon or Neptune (going with the Greek theme, I assume Poseidon).

“Grandpa,” he answers with a wink.