Chicken and chocolate star at the Cellar Door. 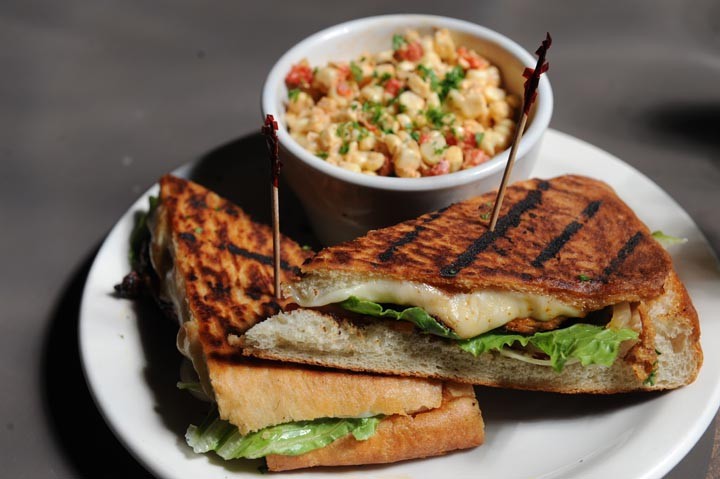 If there's any measure of truth to the saying that location is everything, then the Cellar Door has it made. Located at the bottom of the Stuart Court apartment building (the tall white one, if you don't have every address on Monument Avenue memorized), it's an easy hop from the Fan and Virginia Commonwealth University and a jump from the near West End. Other restaurants in the space, and there have been many, have fallen by the wayside. But maybe the Cellar Door has staying power. During my several visits the cafe, while collegiate, passes muster with some minor snags.

The menu is snacky in nature with only five entrees, and has strong Latin influences. Sandwiches are named for areas in Richmond such as Shockoe Slip and Oregon Hill. Small plates are offered with little twists. We enjoy the Parmesan puffs ($6), although denser in texture than expected, cheesy and slightly bitter. The beef empanada is flaky, spicy and filled with chunks of meat — a clear hit on my first and second visits, when it's served with a spicy dipping sauce. Another time it arrives with bland ground beef with a different sauce, causing me to wonder about consistency in the kitchen.

Zucchini fritters ($5) aren't actually fritters, but delicately fried, thick slices of zucchini, surprising but crispy and piping hot. I try the short ribs ($10), hoping for slow-roast taste but am put off by tough meat with no discernible taste and pasty rice overcome with stock chicken flavor. It strikes out a second time too. But the Cellar Door's take on Peruvian chicken (lunch portions $6 and $10, dinner with two sides and salad for $14) is outstanding. Marinated for 24 hours and then oven roasted, the results are tender, juicy flavor-packed meat.

A sandwich, the Manchester ($8), makes good use of the same chicken with the addition of creamy avocado. The Pump House ($6) is a great rendition of a grilled cheese with sautéed spinach and tomato. A little lighter hand on the balsamic vinegar (not stated on the menu) and it would be stellar. The Scuffletown ($9) is crunchy and large, bursting with sliced turkey, hickory bacon and a spicy jalapeno dressing. This dressing is in-your-face spicy, a bit gritty and a welcome addition to the hot (in temperature) sandwich. Side dishes (all $3) include crunchy jicama shaped to look like fries, ubiquitous sweet-potato fries and crunchy steak fries, a mashy, nondescript Mediterranean potato salad, and a highlight, the roasted corn salad.

The ambience is relaxed and inviting. Televisions seem appropriate here and each time I visit they're playing some sort of sport. Rotating taps have excellent beer specials and the list is well rounded with such delights as Bell's Best Brown and Two Hearted Pale. Service is good on most of my visits and each server is prompt in making suggestions and describing the specials in detail.

A family is noshing on my last visit and a child who looked as if she'd dunked her head in the chocolate she was enthusiastically shoveling in proved enough of a suggestion for me to attempt dessert. They're made by a local company, Lucille's, and include cheesecake ($4) and Mexican chocolate torte — dense with subtleties of Kahlua ($6). Some of the menu prices differ between the cafe's blog and Facebook page, and may be somewhat higher than when I ate there recently.