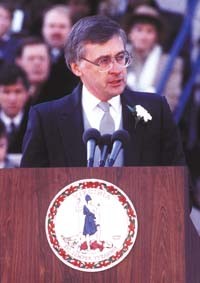 Recalling both his own inauguration as governor and another four years earlier when he was sworn in as Virginia attorney general, Gerald Baliles says, “They all seem to be on record cold days.” He also fully appreciates the wisdom of never competing with a child or an animal for attention.

“My dog stole the headlines,” he says. “On the evening before the inauguration, our last night at home, we were out rather late and someone forgot to put out the dog. The next morning, Inauguration Day, we discovered the consequences of that inattention in our Florida sunroom.”

There was a loud command from wife and children to the soon-to-be-governor: “‘He is your dog, clean it up,'” Baliles says, laughing.

Thus did Bandit the beagle share the front page headlines with the new governor.

Because they already lived in Richmond, the Baliles family took its time moving into the Executive Mansion — two weeks. “We were tired, happy and humbled at the opportunity to live in such a historic home,” he says, “but too exhausted to explore the mansion on the first evening.”

And on the subject of words of wisdom to an incoming governor, Baliles says, “My advice would be private and not public.” But, he adds, “I particularly recall Gov. Albertis Harrison's advice: ‘After the election the best politics is good government.'”