A development near Harlem gives a glimpse of the future at West Broad and Belvidere in Richmond.

New York — It's approaching 5 o'clock on a recent Friday. It should be quitting time at the firm of Steven Holl Architects on West 34th Street. You know, shopping to do, holiday parties to attend. But the office is still abuzz. Holl, an architect celebrated internationally for his abstract forms and complex geometric spaces, makes his rounds. With his shock of longish white hair and dressed all in black, he seems almost Zen-like as he pads from work space to work space. In hushed tones, he discusses with various associates some design detail or another.

Visible just beyond a huge casement window in the 11th story studio is a dusting of snow that softens the ground and underpinnings of what will be an 80-story tower under construction across the street. Eventually, the high-rise will block the Holl firm's dramatic view of the Hudson River. But the Hudson Yards development should transform this scrappy Hell's Kitchen neighborhood as part of the significant architectural legacy of Michael Bloomberg's mayoral years.

Farther up on Manhattan's West Side another project — much smaller in ambition at just 46,000 square feet — has been delivering transformative punch since its completion early in 2013. It is Columbia University's Campbell Sports Center at Broadway and 218th Street north of Harlem. This recently completed product of the Holl firm has settled like a huge, metallic Tinkertoy at an unlovely, heavily traveled, mixed commercial and residential intersection. But the Campbell center, an athletic training and education building, dignifies its hardscrabble setting not by ignoring its environmental context, but embracing it. The aluminum-sheathed structure takes cues from such surrounding industrial landmarks as the Broadway Bridge, which crosses the Harlem River to connect Manhattan with the Bronx, and the nearby metal stairways and elevated tracks of a subway line. 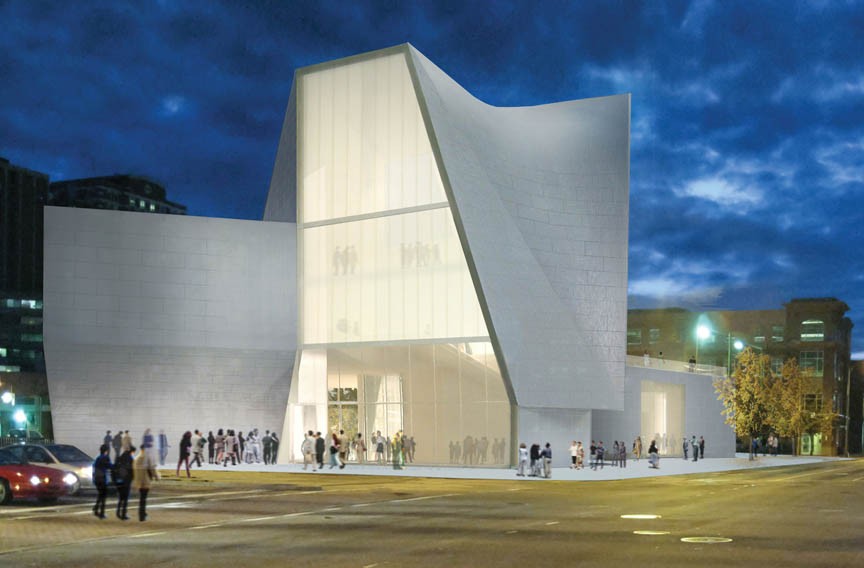 When I'd visited the Campbell center, set at the edge of and overlooking Columbia's sprawling  football and soccer fields, on a balmier autumn day some weeks back, I'd been struck by the similarities between the transformative powers of architecture at that site and what the Holl firm proposes for Virginia Commonwealth University. In Richmond, at the southwest corner of the heavily trafficked West Broad and Belvidere streets, a 40,000-square-foot, $35 million Institute for Contemporary Art is planned once funding is secured. It is all privately-funded. Truth to tell, I'd been a little hesitant about the possibilities of such a manic intersection as a setting for contemplating art. But exploring Holl's architectural magic at Columbia along a similarly challenging cityscape made a believer out of me.

"Both the Campbell Sports Center and the Institute for Contemporary Art are two-fronted buildings" explains Chris McVoy, a partner in the firm who designed the Campbell building with Holl, "Every side is a front." In other words, both acknowledge the urban context, but are also very much a part of the respective campuses they serve.

"VCU's building is literally getting a gateway that links the city to the campus," says McVoy, "The Columbia building is like that too."

At Columbia, the L-shaped Campbell center serves as a transitional structure between town and gown. Near the busy street intersection it serves as a kind of brace — a retaining wall — as the site slopes down to the Broadway streetscape of car washes, automotive repair shops and fast-food joints. But on the inner, campus side, its structure acts as extended arms that embrace the football practice and soccer playing fields. Inside, there are workout areas, classrooms and multi-purpose rooms. Campbell works as a frame that embraces the playing and practice fields.

While VCU's art institute will also anchor the corner of a busy intersection, it has its differences from what's happening at Columbia. "The ICA will have a two-fronted lobby with two entrances that are equal," says McCoy. "It's a portal. Not only will it be a literal gateway, but you can walk right through the building from the street and into the sculpture court and campus beyond."

"It's a building that has a lot of creativity at a very important corner. It's really going to transform that space."

In New York, the Campbell is being widely acclaimed for having transformed its site. In December, the relatively small project won The Municipal Art Society of New York award for best new building of the year. That's quite a shout-out in a city undergoing dramatic building construction from lower Manhattan's Freedom Tower to soaring new apartment towers in midtown.

"The center, designed by Steven Holl and Chris McVoy … is a trifle beside Mr. Holl's mega office and residential projects in China and elsewhere," wrote architecture critic Michael Kimmelman in his New York Times review of the Campbell. "But it is a tough, sophisticated and imaginative work of architecture for a devilish site."

We should be excited about how the Steven Holl Architects-designed VCU Institute for Contemporary Art will transform a tough Richmond intersection. S