Growing a bonsai is a lot like owning a pet. 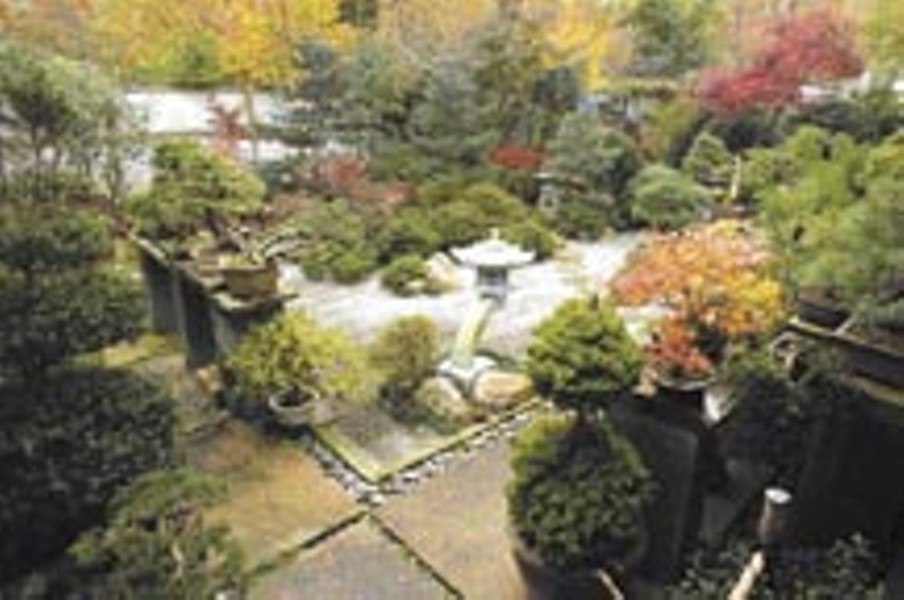 Hence, people end up with bonsai when they should really be getting Chia Pets. Perhaps a practice like bonsai that honors patience and observation probably shouldn't be started in a large retail chain store.

Jim Ford, president of the Richmond Bonsai Society, calls those ill-fated trees "kamikaze bonsai" because "they're made to go home and die." Ford says they often come with a nice red ribbon, but not enough instruction to keep them alive much past New Year's. If you should get one, be ready to work.

The first thing to do is to chip out the small rocks glued to the soil, Ford says. That's just for shipping and makes watering impossible. Buy it a different pot, or else make sure there are holes in the bottom for good drainage to prevent root rot. Water it and buy a book or two. Ford recommends "Bonsai" from the venerable "Sunset" series, "Simon & Schuster's Guide to Bonsai" and "Indoor Bonsai" by Paul Lesniewicz. "If it doesn't work out," says Ford, "You have a wonderful bonsai pot to work with."

Ford has seen a lot of little trees in the 30 years he's been studying bonsai. As a landscape architect, he's converted his home to more Eastern principles, complete with sliding screens between rooms, a raked-sand Zen garden and a sanctuary for roughly 400 bonsai. Through his work with the Richmond Bonsai Society, he's seen a lot of folks come through after their holiday bout with bonsai. They realized there was more to it than houseplant maintenance.

"Bonsai is half art and half horticulture," Ford says. Bonsai (bon: tray, and sai: tree; so, literally, tree in a tray) came from Japan as a meditative form of gardening that originally was practiced only by emperors, samurai and noble classes. Eventually it filtered down to regular folks and made its way west, finding an audience tired of growing green Afros on terra cotta heads.

Horticulturally speaking, Ford says, the most important thing is to keep the bonsai alive. Create an environment for it that resembles the one it came from. Read up on the species, find out what it likes. As for soil, there are many types, but most are a combination of pine bark and gravel.

Artistically, things are a bit trickier, but Ford says that comes in time. He says to study the plant and its possibilities, and consider how energy will flow through it if you cut a branch here, peel some bark there or train it with coils of copper wire. Patience and dedication are ultimate virtues.

His bonsai represent a cross section of styles: the formal training, with straight stair-step limbs; the informal, trained to bend; the cascade, growing down over the lip of the pot; windswept, looking like something on the Californian coast; the forest, a cluster of trees; the literati, a single, unusual design. The trees themselves are varied as well, from a 100-year-old Chinese elm to a palm-sized forest in the "mame" style. The deciduous have lost their leaves, revealing the visually appealing silhouette. Some are trained to look like they've been struck by lightning. "It's really having a tiny piece of nature to appreciate," he says.

While his are all outdoor trees — juniper, elm, azalea, 30 varieties of Japanese maple — he recommends using ficus, aralia and schefflera for indoor bonsai. The rascally jade also makes a nice bonsai with a succulent flair. Or give local varieties a try: Virginia pine and American hornbeams can be trained too.

Most important, be patient. "Bonsai is all about time," Ford says. Some are so old they get passed down through generations of family or cross national boundaries. Bonsai is a way of adjusting our perceptions of time to a longer scale, a gift of permanence like that other emblem of eternity, the noble fruitcake.