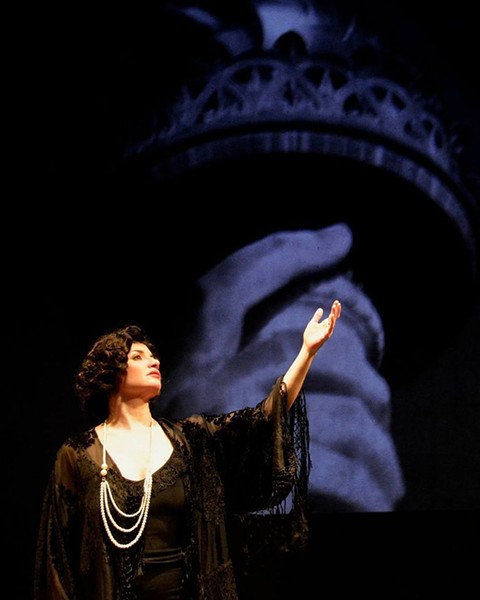 Her success was meteoric. At one time, she was the highest paid actress in Hollywood’s silent movies and had a Broadway theater named after her.

She was also the first female writer, director, and producer in Hollywood. Her salary was higher than Mary Pickford’s, yet her story remains largely forgotten.

Romy Nordlinger's critically acclaimed solo multimedia performance, “Garden of Alla,” aims to correct that by telling the story of the greatest star you’ve never heard of: Alla Nazimova. The trailblazing iconoclast’s thoughts are brought to life on the screen in a nonstop flow of video, images, and sound -- a postmodern cacophony from Nazimova’s all-seeing perspective.

The process began when a friend, Mari Lyn Henry, a theatre historian, author, and founder of the Society for Preservation of Theatrical History, asked Nordlinger to pick an actress to research and write about.

“She suggested some wonderful actresses, but I wasn’t feeling the spark of inspiration and I just couldn’t imagine myself playing any one of them,” Nordlinger says. “They all were very blonde and talented, but I felt no relation to them. Then Mari Lyn suggested Alla Nazimova.”

As Nordlinger began reading about Nazimova, she found similarities. Both were Jewish and Belarusian. After reading a biography by Gavin Lambert which quoted from Nazimova’s journal writings, Nordlinger became mesmerized by her humor, her story, and most of all, her zest for life. “This was a woman who lost everything, overcame the most horrible circumstances, became a star more meteoric than even Madonna, and ended up a guest inside the mansion she used to own,” explains Nordlinger. “She was a survivor.”

Because Nazimova was a silent film star as well as a director, Nordlinger realized that “Garden of Alla” had to be visual, sumptuous, and resonant of the visionary work the star had created.

“I wanted to create a world that evoked the 1920s and the silent screen world, so it became a hybrid of theater and film,” she says. “Adam Burns, the video designer, researched archival footage and the show used a lot of that, then Nick Moore’s haunting, evocative and eclectic musical score took the show to another level. And director Lorca Peress used her abundant gifts to help me craft the show.”

The goal was to create a performance that would resemble being inside a live silent movie, so that, as Nazimova unfolds her story, it sweeps the audience into her world.

“Nazimova was fighting things in the 19th and early 20th century that we’re still fighting today - sexism, racism, homophobia, and ageism- except she was doing it alone and without a Twitter account,” Nordlinger points out. “I juxtapose her life through the lens of her being an all-seeing ghost who’s able to peer into the life of the 21st century and reflect on the past and present, simultaneously. She helps us to take back our collective history, raising her voice to share her journey as a trailblazer who loved America as only an immigrant can.”

Nordlinger sees Nazimova’s story as more important now than ever given an escalating climate of homophobia, misogyny, and control of women.

Telling the star’s story allowed her to rediscover Nazimova and people like her -Jewish women, LGBTQ people, women in Hollywood, immigrants- and preserve their work and spaces. For Nazimova, that was her namesake theater on 39th Street in New York City and her Garden of Allah Hotel, which is now a nondescript strip mall in West Hollywood.

“Nazimova’s story empowers people, particularly younger people, who might be thinking of coming out or declaring something about themselves, whether it’s coming out as LGBTQ or Jewish or just feeling proud of who they are,” Nordlinger says. “Nazimova did it back then on her own, in an oppressive time for women and the LGBTQ community. It really blows your mind.”

Although everyone attends the theatre for different reasons, Nordlinger has discovered while performing “Garden of Alla” that one aspect that seems to translate to all audiences, whether young, old, gay, or straight. Most people can relate to the story of the underdog.

“Her story of overcoming adversity again and again, and then continuing to flourish even when her Garden of Allah was taken away and she was left almost penniless, inspires me to stay true to myself and not take anything for granted,” Nordlinger says.

“I have watched audiences from their teens to their 90s who’ve been moved by Nazimova’s story,” she says. “It’s a universal story that inspires, and everyone leaves the theater asking, ‘Why have I not heard of this woman?’”