The Library of Virginia explores night photography with a new exhibit. 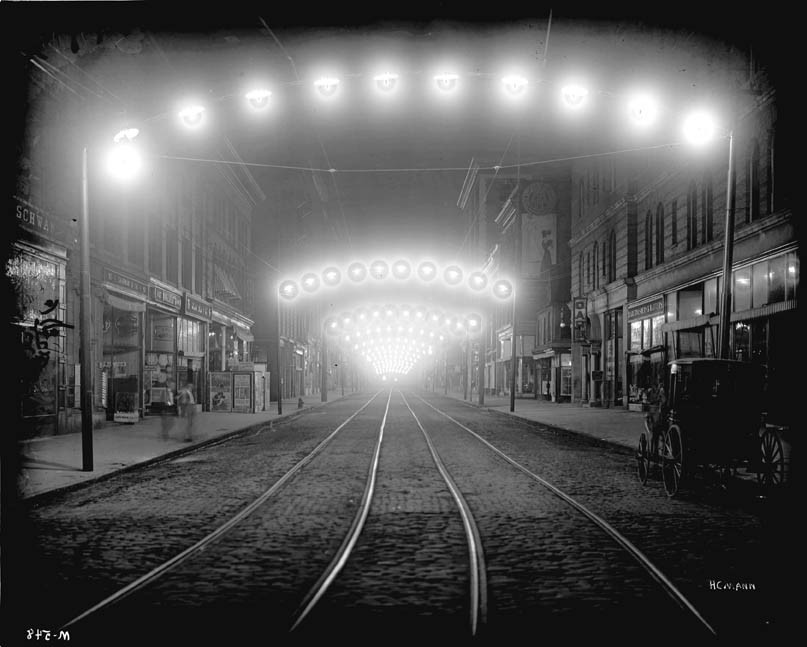 The Library of Virginia couches its new exhibit, "Dark Side: Night Photography in Virginia," as a technical tour de force, focusing predominately on the medium itself. Justifiably, anyone who's taken a photo in the dark knows it can end in less-than-desirable results — exposure problems, blurry subjects or glaring flashes.

From its collection, the library culled successful examples of night photography from the 1890s to today. The exhibition predominately features black and white documentary photographs that record the changing landscapes and people of Virginia. But these images offer more than just technical adroitness or historical record. They offer compelling and diverse subject matter. There's a present-day composite of the night sky made from more than 80 shots, and a photograph of Ghent, Norfolk, circa 1942, complete with glowing electric signs advertising the Gaity burlesque theater and Girlie Show.

Indeed, the Library of Virginia openly recognizes the narrative-rich content. A creative writing contest coincides with the exhibition. Until Oct. 10, the library challenges visitors in person and online to submit 1,000-word entries for 10 photos. The prompt invites writers "Who are the people in the image and what were their lives like? Your writing can be more interpretative than literal. For instance, does viewing the photograph elicit a particular emotion?" Submissions, including poems and short stories, are available for others to see online.

This element of storytelling probably is the most compelling aspect of the exhibit, and it's more pronounced in the older and figurative photographs. Under the veil of night and blackness, life becomes a little different. Moonless recesses and shadows, created by electric and natural light, hide and reveal. For example, a well-lighted Virginia Capitol captured in 1954 under a fresh coat of snow clearly depicts the George Washington statue and a line of parked cars. Streetlights pepper the road in the respectable image, bathing the scene in artificial light. Likewise, the color photo "U.S. Eastern Seaboard at Night from the International Space Station" (2012) matter-of-factly records the North America from space. It's scientific and straightforward, leaving little sense of mystery.

In contrast, several images offer imaginably more ominous or perplexing scenes. For these, night and its ensuing darkness become a psychological element. In John Mays' "Central National Bank" (circa 1950), an older man dressed in black — trench coat, dress pants and brimmed hat — walks down a dim hallway. What or whom is he walking toward? What business is he conducting at night seemingly hidden in the deep reaches of the bank? Similarly, Adolph Rice's "Broad Street at Night" (1959) depicts the main drag clothed in the thick black sheath of night: An electric sign for the Hotel Richmond, and a lighted clock face stand out in the lower left. Here, night hides almost everything, exposing little to viewers.

When looking at another example, Harry Mann's "Night View ... Along Granby Street" (circa 1914), the viewer initially sees a well-lighted image of the Norfolk thoroughfare. But look closer. While the lights reveal, their bright, surrounding glow also disguises what lies behind each row. Additionally, do you notice the two well dressed but barely discernable men standing along the left side of the street? Yes, this is a technical error, but as a narrative it adds a deeper element that questions the notion of reality. Finally, the black vignette that frames the photographs obscures all contextual references in a way that's unsettling to the viewer; title alone grounds the site.

The exhibition space underscores this element of darkness and mystery. The dim gallery seems to transport you to nighttime with its richly painted walls. The high-quality printing of the large black and white photographs offers saturated jet-blacks, a broad grayscale color palette and pure, luminous whites. Because of this well-polished display, it's possible to forget the technical adeptness. Instead, you have the leisure to enter into the narratives, becoming lost within the stories. Sometimes it's an ancillary role, merely observing the actions of others. At other instances, you become the main character directing supporting figures to do this or that. It's a reactivation, another life for images that usually sit as smaller prints or negatives in storage, accessed mostly by scholars for their historical value. As a vision of the dark night, these photographs welcome the possibility of dreaming. S

"Dark Side: Night Photography in Virginia" runs through Oct. 5 at the Library of Virginia, 800 E. Broad St. For information call 692-3500 or visit lva.virginia.gov. Details on the creative writing contest are online at virginiamemory.com/blogs/dark-side/contest.