If the Pamunkey tribe goes the federal route to open its Richmond and Norfolk casinos, the properties would be tax-exempt. 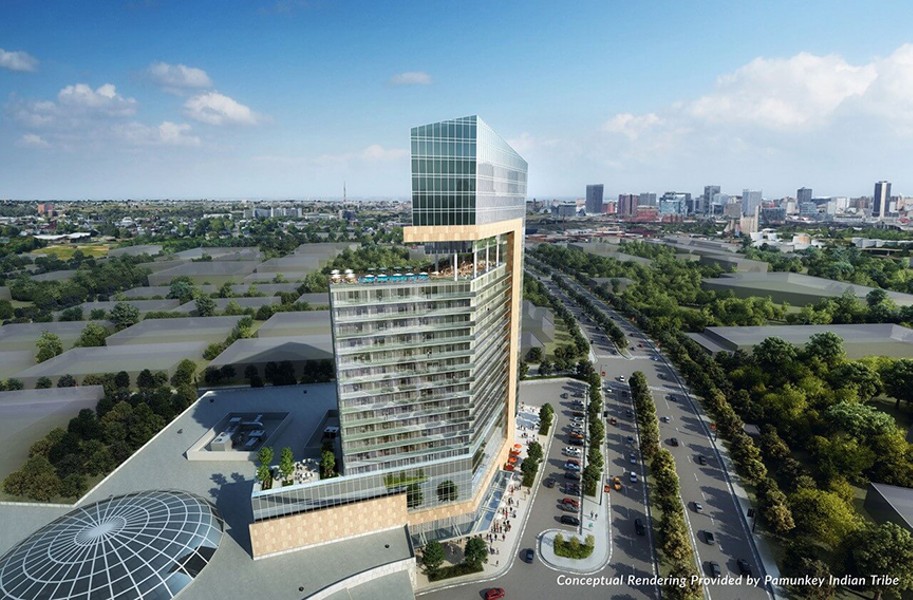 Last week, the Pamunkey Indian Tribe announced plans to purchase four parcels in the Manchester neighborhood and Jefferson Davis Highway corridor on which it plans to develop a casino and resort starting as early as next year.

The proposed $350 million destination spot would include a four-diamond, 275-room hotel tower, a spa, steak and seafood houses and a parking garage accommodating 1,000 spaces. “Not only does this help fulfill the government’s intent to use gaming to help us secure our future, but it will also be a great economic boost to the City of Richmond and its citizens,” says Pamunkey Chief Robert Gray.

The project mimics a larger-scale resort and casino project in Norfolk announced by the tribe last year, and it would create 1,000 construction jobs in addition to the 1,500 full-time positions needed to staff the venue.

Gaming is not currently legal in Virginia, but the tribe has flexibility and options other developers don’t. The Virginia General Assembly last year passed a bill that would allow commercial gaming, but the measure requires re-enactment by the legislature this year. The tribe will not know until March whether it will pursue the commercial gaming route should it be legalized in Virginia.

“As a federally recognized tribe, they also have the inherent right to do gaming ... the state route may include the requirement of a referendum [at the local level], which would put it on the ballot as early as November,” says Jay Smith, a spokesman for the tribe.

The tribe has only recently begun talks with City Council and the city’s economic development department, Smith notes, adding that the properties were purchased privately — three parcels totaling 36 acres in Ellen Robertson’s 6th District in Manchester and another 13 acres on Jefferson Davis Highway, currently a vacant strip mall in Reva Trammell’s 8th District. The latter location would be used as a training facility for the 1,500 employees the casino and resort would require.

Once operational, the latter facility would be converted into “something the community needs,” Smith says, such as a grocery store or health clinic.

“This will change the skyline of Richmond’s South Side,” Smith says. “No longer do all the exciting new projects have to be north of the river — this is something that will show that growth and development can happen on the South Side, too.”

Another distinguishing factor, Smith says, is the lack of any incentives from the city in exchange for a multimillion-dollar investment and thousands of job opportunities.

“The tribe, different than a typical developer, is interested in doing gaming not for the sake of gaming, but it allows them to help improve the lives of their tribe and other disadvantaged communities,” Smith explains. “Unlike a lot of developments, we’re not asking for any incentives, tax breaks, anything like that — and if it goes the commercial route, where it’s not tribal land, then we would simply pay regular taxes like any other property owner.”

In other words: if the tribe pursues the federal route for opening the Richmond and Norfolk resorts, the properties would be tax-exempt, much like the large swaths of downtown that don’t pay taxes due to state-owned or nonprofit tax exemptions.

Smith is quick to clarify that the tribe isn’t necessarily the one pushing the legislature to pass gaming. There are other players such as Hard Rock or MGM, which want the legislature to approve the measure to pursue plans in Bristol or Danville, where the Pamunkey would not be competing because their ancestral lands fall primarily along the Tidewater region — east of Richmond to the coast, up to the Potomac River and down to the North Carolina border.

“We have the flexibility,” Smith says. “Our anticipation is we’re going to bring millions of visitors to this every year that will have an economic impact in Richmond.”

He notes that if the tribe chooses to pursue the federal route, it will still have to contract with the local government for services to remain operational on an annual basis despite not having to pay property tax. Regardless of how development proceeds, the tribe would not begin submitting engineering plans or building permits to the city until at least 2021, Smith says.

While the Pamunkey have been native to Virginia for 10,000 years, the tribe only gained federal recognition in 2016, which it had been seeking since 1982.

“They are anxious to get started [on development] because their people need this opportunity — they can’t afford to wait,” Smith says. “It’s gaming for the sake of economic development and improving their lives and other disadvantaged communities in the process which is why they picked this location off Jefferson Davis Highway.”

Since gaining federal recognition in 2016, the tribe has been aided by grants and federal programs. So far, the tribe has used those resources for housing and shore retention projects, but ultimately doesn’t want to be dependent on the government for members’ livelihoods.

“Federal programs or federal grants can dry up or go away and they want to be independent,” Smith says. “And the government — that’s why they gave this opportunity to do gaming to tribes — they want them to be self-sufficient as well.”