Owner says he’d like nonprofit to be able to stay. 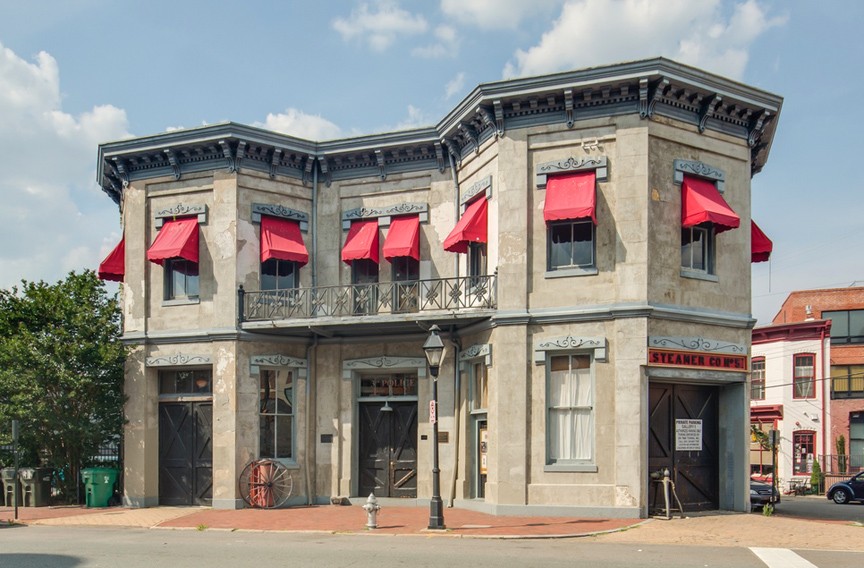 The man who owns the national landmark firehouse that Gallery5 calls home has officially listed the property for sale for $1.82 million through SVN Cornerstone Commercial, which specializes in historic properties.

But for the time being, he has refused to put up any for-sale signs in front of the building because he doesn’t want to hurt the operation of Gallery5, he says.

Robinson, who now lives in Moon, Virginia, says his first choice is to see the building remain the home of Gallery5, which his daughter, Amanda, once ran. The 12-year-old arts venue is known for its unique and community-friendly mix of local and national art, and recently was awarded Best Independent Art Gallery in Style’s Best of Richmond issue.

So far his asking price has proven too steep for the nonprofit.

The city assesses the building and land at $579,000, according to city real estate records, though Robinson says an insurance appraisal came in at $975,000. He notes that he initially offered the building to Gallery5 for $750,000 several years ago, with $100,000 down to pay off the mortgage. He says he told them he would help the group finance it.

But his own efforts to guide the venue to surer footing have proven to be an uphill battle with its young, evolving board, he says, none of whom are full-time employees of the nonprofit.

“I love them to death, I really want to see them succeed,” he says, noting that he’s been subsidizing the group for years through reduced rent. The gallery pays $1,500 a month now for about 8,000 square feet. “But I felt if I didn’t put it up for sale, nothing was going to happen.”

The small Gallery5 board of directors, which held a strategic meeting on its 12th anniversary in April, remains steadfastly focused on providing an independent community arts place. Members have started a campaign toward purchasing the property, according to its board chairman, Prabir Mehta.

“I think 1.8 million is a bit much when a half a million to a million worth of work needs to be done,” he says. “For the past 12 years, we’ve done repairs and restorations. It’s a bummer to think that the work we’ve done to keep it up to code could be in jeopardy of it becoming condos. But that’s the world we live in.”

When asked, Mehta says that he “can’t fathom at this point” how much money the group has put into the building over the years, but notes that replacing an air conditioning unit was one of the biggest expenses.

Robinson says he’s tried to help the group bring in “some people with money on their board of directors,” but claims it wasn’t interested. He also feels that the nonprofit holds too many free events for the community, he says.

Mehta points out that Gallery5 runs one free event a month on First Fridays as well as live music and board games for free on Wednesdays. Most of its arts events charge, he says, though steady repairs have been a drain on resources.

He feels that the amount of repairs they've already done should be taken into consideration regarding the price of the building.

Robinson originally bought the double-bow Italianate building at 200 W. Marshall St., known as Steamer Company No. 5, in 1976 for about $19,000 and donated it to Virginia Fire and Police Museum in the early 1980s. He later bought it back in 2003 for about $35,000. He has spoken at Richmond events about its fascinating history.

“It’s more than just a building,” he says. “The hangings, the gunfights, the history that was there: [A former] captain was the editor of the Richmond Dispatch in the horse-drawn days, he gave the Richmond Spiders their name, and he was the mayor who got into a gun battle with the Reconstruction mayor which led to the great Capitol disaster of 1870. All of that started there. ... It’s one story after another that was so important to Richmond history.”

Robinson admits he was shocked by the price the brokerage put on the property. He said that SVN came back with a 31-page report showing it should be listed at $1.82 million.

“It’s difficult to price a historic landmark, some of the data indicated a higher price. We base our estimate on what’s going on in the neighborhood,” says Chris Hopper, senior advisor at SVN Cornerstone Commercial. “It’s an up-and-coming neighborhood, vibrant, connecting the two campuses of VCU, you’re right in the path of good things happening.”

Robinson gave SVN a six-month listing. He says the listing got the attention of Gallery5 — which since told Robinson it has a pair of investors willing to put up $80,000 to help buy the building at the initial offer of $750,000 if it fails to sell at $1.82 million.

Mehta explains that “right now, the board of directors are working on all the due diligence to understand all the costs with the upkeep of property as well as future enhancements that need to be made to the building to ensure that we will be able to safely conduct our mission for generations to come.”

By Aug. 1, the board plans to have a list of options laid out for upgrade strategies. And if the property sells before then, “We’ll deal with that when we come to it,” Mehta says.

This article has been updated to reflect that the brokerage firm name is SVN Cornerstone Commercial, not SVN Motleys.