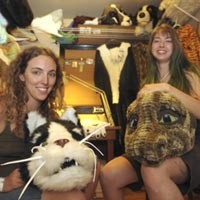 The elevator doors open and a man sprays three quick clouds of Febreze into the sardine-tight crowd. The elevators doors slide shut.

"God, I hate it when they do that," a muffled voice says from inside a tiger costume.

A man with a safari hat and a fox tail responds: "At the last con I went to, they had huge industrial bottles they were spraying into the elevators." He pauses. "I mean, it does help with the smell."

There's a distinct odor that can only accumulate at a furry convention — the unpleasant scent of hundreds of people capering around wearing animal costumes. But then, it gets hot having a fetish in summer weather.

Costume designers have enough to think about without considering the smell question — constructing a suit that reflects your inner animal. If designer Lynne Low-Hassell understands this better than most, it's perhaps because she's also a lizard.

"When I wear my lizard costume," she says, "I don't feel like I'm dressing up, but like I'm shedding my human suit." Low-Hassell, 27, designs and builds costumes for other folks like her — people called furries, who feel most comfortable when dressed as animals.

She came to this profession as most people do: thoughtfully if not directly. As a sculpture student at Virginia Commonwealth University, she was fascinated by roadkill, got into taxidermy and turned animals who'd been packed off to the next life into thoughtful commentary on the human condition. She left stuffed squirrels all over campus. She posed one as Rodin's "Thinker" and left it on the dean's shelf.

It was only a matter of time before she started making larger skins for people to wear, more commentary on the human condition. She met Katie Dietrich at VCU and brought her in as an intern, and liked her so much she hired her as a seamstress.

Dietrich, 23, makes one thing clear: "As a costume maker my job is to help create a furry's bridge to their spirit animal. I am not a furry though," she says firmly. "I am a costume maker."

Together, the lizard and the seamstress run Koi Fox Studios, a homegrown Richmond company whose main task is to stitch together that plushy bridge to the spirit animal. The Koi Fox girls make custom costumes catering to the furry community, though not confined to that niche market.

Koi Fox has been commissioned recently by several metal bands to make costumes for stage and screen. Local Richmond thrashers Cannabis Corpse commissioned a Weedmonster, amongst several other costumes, for their performance at this August's Best Friends Day, a staple event of Richmond's counter-culture scene. Torche, an Atlanta-based metal band, commissioned Koi Fox for costumes to be worn in an upcoming music video. The Koi Fox girls are a busy duo. "We have to make a fur suit each week for the month of July," Low-Hassell says. Koi Fox suits are in high demand.

"I incorporate what I learned from taxidermy when designing costumes," Low-Hassell says. The result is curvy and cartoonish — proportional to the animal, still playful and inviting.

This is largely because of Low-Hassell's costuming roots. Before her realization as a furry, Low-Hassell attended anime conventions, first costumed as Sailor Mars and later as Vaporeon, a Pokemon character. The anime aesthetic rubs off on Koi Fox fur suits.

Dietrich got added to the Koi Fox mix after years of commercial sewing projects which catered to the jam-band community — patchwork clothing, purses, accessory bags — which she sold at concerts and music festivals across the country. "I do quality work, fast," Dietrich says. "Lynne makes the heads and paws and I sew the body suits."

Low-Hassell's house is Koi Fox Studios headquarters — a space she shares with her husband, Andy Low, and his record label, Robotic Empire. The official Koifox Studios storefront is located at www.lynnehassell.com, but on occasion, the Koi Fox crew showcases its wares at furry conventions — gatherings of furries from all over world.

During the last weekend in June, Koi Fox Studios took its wares to Anthrocon 2008, the world's largest furry convention, held in Pittsburgh — where all the elevators get Febrezed.

Here the furry fandom mingles under the looming facade of the Westin Hotel. It's a lot of men dressed as animals.

A young man dressed as a bear sits on a bench and removes his head. "I am really hot," he says, handing his bear head to the man sitting next to him.

Another man approaches, wearing a fox tail, and begins skritching the bear's back. They purr and growl at one another. Skritching is a kind of furry grooming practice — hello, good to see you, your place or mine?

The Dealer's Den and the Artist's Alley, Anthrocon's home for handmade crafts and furry paraphernalia, are a one-stop shop for furries looking to part with some greenbacks. Tables are lined with masks and T-shirts, costume accessories (paws, ears, tails) jewelry, posters and various works of original art. Illustrators draw custom anime-style art commissioned by fellow furries. There's a large stock of anthropomorphic pornography — mostly hand-drawn, though sometimes animated or live-action and sold on DVD. The Koi Fox table is a popular spot in the Dealer's Den — so popular that prices needed to be raised on the first day of Anthrocon because goods are selling so quickly.

The Koi Fox girls vote on attending a rave held in the convention center, open to fur suiters and humans alike.

But drama unfolds: Low-Hassell, decked out in her full lizard costume, loses her Anthrocon ID badge and is kicked out of the rave — receiving the first of two strikes for sneaking into the event, as well as an embarrassing black mark drawn across her badge, which the Anthrocon staff had found on the floor of the convention center earlier in the day.

Back at the Westin, Low-Hassell explains: "It's so embarrassing — I don't want to be naughty, I want to be good." She says there's a very real distinction between "naughty furs" and "PG furs." PG furs find pleasure in the innocent activities of furry conventions, such as red rover and live role-playing games. Naughty furs may play red rover too, but they also engage in fetish sex during furry meet-ups.

As a seamstress, Low-Hassell must appeal to both. If she's identified as naughty by the bold black slash drawn across her badge, the PG furs will no longer want to do business with her.

Recently, a furry by the name of Starlight Dragoon commissioned one of the most elaborate naughty suits the Koifox duo has handled. An electric blue fox, Starlight's suit incorporates hermaphroditic anatomy — studious attention given to the female sex organs, including labia, clitoris and even a hymen formed with a red string, so Starlight can, when he's ready, lose his fur-ginity.

The function of the fur suit becomes most visible when watching furries interact at this dance. Furries interact behind their "fursonas" — because many furries are heavy online gamers and live role-playing enthusiasts, to socialize from behind a calculated persona is to feel at home. Also, many furries are homosexual men, so the fur suit provides a sense of security — not only do furries feel the comfort of their avatars, but also are shielded from being outed.

A dog and a mouse take a moment to rest and remove their heads.

"Today, I slammed my tail in a door and I felt a pain," the headless dog says.

"Oh, that's happened to me before," the mouse agrees. "Phantom tail pain."

On the dance floor, Low-Hassell has become a lizard — large friendly globe eyes and a five-foot removable furry tail. Dietrich looks sullen, watching her friend on the dance floor from the sidelines.

"I do these things for Lynne," she says, standing up and walking out of the room.

Twenty minutes later she returns, no longer a human, but a puma. Low-Hassell does a bow-legged lizard dance, hopping around the room and waving her arms at the sight of her companion.

While Dietrich sticks to her not-a-furry guns, on rare occasions — for moral support — she does strap on a suit and get into the Koi Fox spirit.

Koi Fox nearly sells all its products over the weekend. On the drive back to Richmond, Low-Hassell goads Dietrich.

Holding the steering wheel and sighing, Dietrich gives a stern side glance, "no, not even 10 percent." S